My life has been filled with uncertainty for a long time, but my son has helped me stay flexible, adjust expectations and persevere. 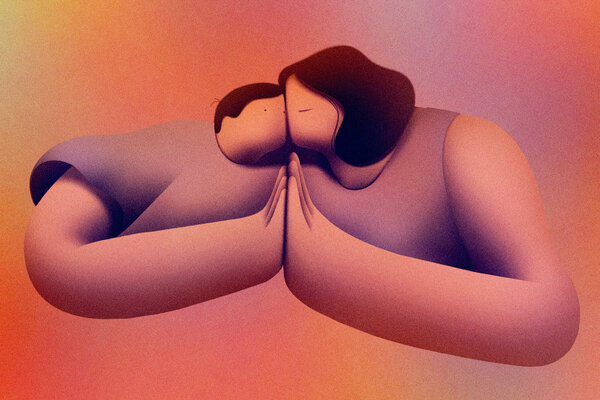 It feels like forever since we took up residence in the United States of Anxiety. As the months drag on, that mix of fear and fortitude I felt at the beginning of the pandemic is giving way to fatigue and frustration.

The crisis isn’t abating anytime soon. Yet surprisingly, the uncertainty and angst feel familiar. I know this road. As a parent of a child with special needs, I’ve been traveling it a long time, learning how to stay flexible, adjust expectations and persevere.

The coping strategies I’ve learned on this journey will be useful for any parent navigating these extraordinary times.

When our son was first given a diagnosis of autism as a small child in the mid-90s, it felt like looking down a long, dark tunnel. The future was uncertain. Unpredictable. Then, as now, much of the advice we got was confusing, and often contradictory. Our family had to learn to get comfortable with being uncomfortable. Initially, I was private about what we were going through, and retreated inward. A few years later, when I finally connected with other parents of children with special needs, it felt like releasing a deep breath I’d been holding for way too long. These fellow travelers validated my feelings, shored me up, and even made me laugh.

Now that colder months, flu season and a resurgence of Covid are here, it’s going to be harder to stay connected to the friends and family we spent the summer seeing outdoors. It will be tempting to give in to the instinct to hibernate. My advice? Staying home doesn’t have to mean being isolated.

Instead, I’ve made it a point to text or speak daily with my college roommate. We make self-deprecating quips, discuss books and binge-worthy Netflix series, and confide fears, from the mundane (our gray hair roots) to the existential (dying alone on a ventilator.) It was a relief to confess the shame I felt about all the things I haven’t done for my son in the months since we’ve been sheltering at home together. “It reminds me how when he was little, I always felt there was one more therapy or diet or intervention I should be trying, because otherwise I wasn’t a good parent,” I told her. “Guilt is still my co-pilot.”

“Then maybe it’s time to choose a new one,” she said gently. “How about self-compassion?”

A widely cited study from 2010 found that mothers of kids with autism had stress levels similar to those of combat soldiers. This is particularly the case when children have challenging behaviors, according to a 2020 study. I haven’t measured their cortisol levels, but I’m betting that’s true for most parents now living through the pandemic. With no sign of relief anytime soon, parents, especially those with children and teens under 18, are reporting soaring levels of stress that are significantly higher than those reported in 2019, according to a report from the American Psychological Association published in May. For many of us, the pandemic is a mental health crisis.

When my kids were young and my parents both seriously ill, a social worker at my children’s nursery school who saw me struggling pulled me aside to offer her theory of emotional economy. “You have just so much emotional energy to expend before you’re depleted,” she said. “Spend where it’s most needed.”

The slog of daily crisis management at home right now feels endless. I’m in triage mode. Just as medical personnel sort patients according to the urgency of their need for care, I’m allocating my energy where it feels most imperative: meeting my son’s complex medical, educational and emotional needs, and helping my family feel safe.

As a young child, our son was very literal, like many, though certainly not all, autistic people. When we told him his beloved grandfather who’d died would always live in his heart, he was confused. He asked, “Does that mean he’s buried in my stomach?”

To this day, he struggles to understand idioms, metaphors or sarcasm. He needs concrete information. When we first went into lockdown, he refused to take a walk in our quiet, suburban neighborhood, insisting, “The virus is everywhere.” He’d watched us wiping doorknobs and scrubbing groceries, heard us talking about schools and businesses closing, and concluded that the coronavirus was a miasma hovering right outside our front door. My fault. I’d assumed he knew how a virus spreads, so hadn’t explained it explicitly.

One night, waiting for “Jeopardy!” to come on the air, he caught the end of the evening news about the soaring number of Covid-related deaths. This time, I jumped in to reassure him that while people are getting sick, even dying, scientists are working diligently to find the right medicines, and that soon he will ba able to get the vaccine, just like his annual fall flu shot. We frequently revisit the rules about masks, hand-washing and standing at least six feet away from others. He gets it. Despite all the sensory issues he’s been navigating since childhood, he’s meticulous about wearing his mask.

Just as I once watched from the sidelines as many so-called autism cures, such as secretin, chelation therapy or swimming with dolphins, were proven ineffective or even harmful, I’m sitting out debates on dubious Covid treatments. I trust Dr. Anthony Fauci, director of the National Institute of Allergy and Infectious Diseases, when he says the vaccine will be widely obtainable by spring. Meanwhile, I continue to reassure my son (and myself) that this won’t last forever, even though it often feels as if it will.

After my son’s diagnosis, I often needed to remind myself not to let my fears for his future rob me of my joys in the present. I didn’t know the term for it then, but I was practicing mindfulness. I wore emotional blinders, trying to focus only on what was directly in front of me, one day at a time. I still try to embrace small, ephemeral things daily: the heady scent of Casablanca lilies that bloomed on my birthday; finally being able to see “Hamilton,” thanks to Disney+; the satisfying snap of placing the last piece in a 1,000-piece jigsaw puzzle.

What most comforts my son currently is watching “Family Feud” and “Deal or No Deal” on the Game Show Network, and that’s fine. I’ve indulged in back-to-back episodes of “Love It or List It,” and those handsome “Property Brothers” on HGTV myself. Home and cooking shows offer solace because they feel safe and predictable, when so much else doesn’t. At the start of the shutdown in March, when flour was hard to score, I still managed to bake so many loaves of banana bread that a friend threatened to run an intervention on me. Maybe I’m still overindulging in stress baking, but nothing keeps me more in the moment (or makes my son happier) than the buttery aroma of pumpkin chocolate chip cookies wafting from the oven. Recreational eating is a time-honored coping strategy I’m embracing for the duration.

I tend to be a catastrophizer, but now, more than ever, I’m aware of how my son takes his cues from me. Kids absorb our fears, as well as our ways of regulating our emotions. If I stay calm, he (usually) will too. Years ago, when my car suddenly sputtered to a halt in the middle of a busy street, I forced myself not to panic. I hoisted him on my hip, and told him, “We’re going to have an adventure riding in a tow truck!” Framing scary experiences as “adventures” has gotten us through many challenging experiences, including eight days without electricity, heat or internet during Superstorm Sandy in 2012.

I hadn’t realized the extent to which my son had taken my words to heart, though, until one night recently. We were playing the board game Blokus when our son suddenly announced, “I love having this adventure with you and Dad.”

In a year rife with uncertainty, my son’s optimism is the reminder I need that things will get better eventually. Till then, we will keep on weathering this “adventure” together.

Liane Kupferberg Carter is a New York-based essayist and author of the memoir “Ketchup Is My Favorite Vegetable: A Family Grows Up With Autism.”

Spotify to Launch Localized Service in South Korea in 2021