Home » Entertainment » How Audra McDonald and Michael Shannon Got Intimate How Audra McDonald and Michael Shannon Got Intimate

Naked on a Broadway stage, Audra McDonald is on high alert, all of her senses sharpened.

She likens it to a fight-or-flight response, and it happens eight shows a week: her body’s reaction to being so exposed, center stage in a 1,200-seat house.

“Maybe strippers get real used to it,” she said recently in her dressing room at the Broadhurst Theater, “but for me there’s nothing normal about that. So there’s nowhere in my mind that I can drift off and let this just kind of happen, because everything about it is demanding that you be present.”

Opposite Michael Shannon as the lonely, damaged Johnny, Ms. McDonald plays the broken Frankie in Terrence McNally’s 1987 two-hander, “Frankie and Johnny in the Clair de Lune,” which opens with the graphic sexual ecstasy of the couple nearing climax. Then Frankie tumbles, laughing, from the bed.

Surely the scene has always been delicate to stage, but perhaps particularly now, with the post-#MeToo heightening of sensitivities about the potential for exploitation of actors, especially women. It’s partly thanks to that same movement, though, that the nascent field of intimacy direction is taking off. Now, with “Frankie and Johnny,” it’s come to Broadway.

“There’s just such a history of actors being forced or pushed or asked to do things that they don’t feel good about,” said the revival’s director, Arin Arbus. She worried that the show’s demands on Ms. McDonald and Mr. Shannon “could be problematic. And I knew it could be really scary, for both of them.”

So she got in touch with the three-year-old Intimacy Directors International, which pointed her to Claire Warden. A warm, unflappable Guernsey native and veteran fight director, she has no patience for the idea that an actor might manage to hit his mark, stay in the light, angle his face perfectly, yet get so lost in the moment that he — whoops! — unexpectedly gropes a colleague in a romantic scene.

“That’s not acting,” she said. “That’s having an episode.” 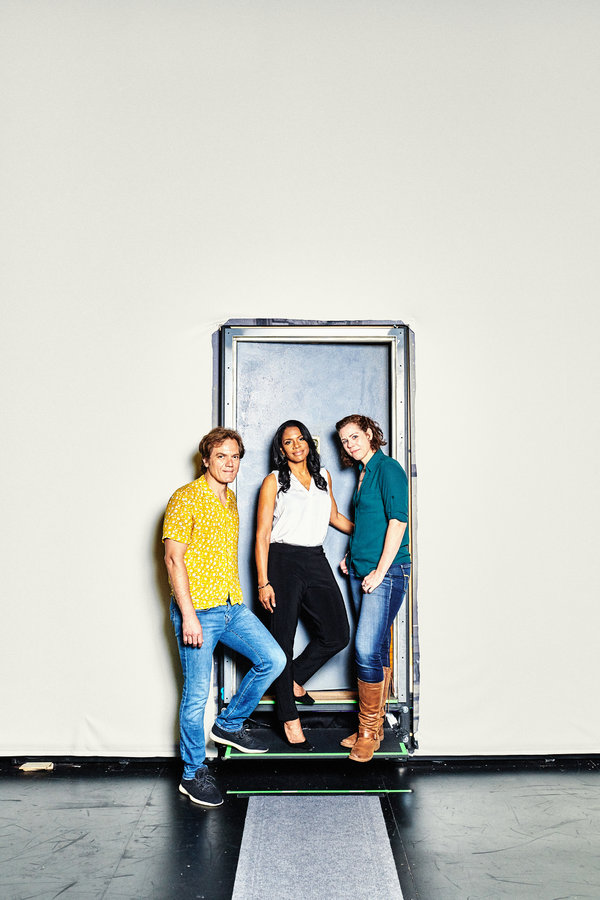 Mr. Shannon, who is 44, has shed his clothes onstage before, notably in Tracy Letts’ play “Bug.” But his first ever sex scene was with Kim Basinger in the 2002 movie “8 Mile.”

“That was kind of like getting hit by a meteor or something,” Mr. Shannon recalled over a preshow espresso downtown. “She couldn’t have been nicer, but I was scared out of my mind, yeah.”

Ms. McDonald — who at 48 has six Tony Awards, one of them for Mr. McNally’s “Master Class” — had never had a nude scene onstage until she played Frankie. The prospect frightened her from the moment she took the role, and when Ms. Arbus floated hiring an intimacy director, Ms. McDonald was all for it.

She had done sex scenes before, though, including one with Woody Harrelson for the 2011 movie “Rampart.”

“It was literally like, ‘Hi, nice to meet you, I’m Woody,’ ‘Hi, nice to meet you, I’m Audra,’ and then,” she said, clapping her hands together, “we started shooting. Everybody was as professional as they could be about it, but there was something that was a little bit” — she paused a long moment to choose the next word — “horrifying, that it was just: Who’s helping us figure out what to do?”

For approximately ever, expecting performers to improvise was a widely accepted practice. It’s only in the last couple of years that helping them through it has become the work of intimacy directors.

One of the first things Ms. Warden does on a show is talk privately, one-on-one, with the actors, to learn what they’re uncomfortable with or anxious about. (“It’s kind of like going to confession,” Mr. Shannon said.) If there’s a place where they don’t want to be touched, or a part of their body that they don’t want to be seen, she will defend that boundary for them.

As she creates a choreography that achieves what the director needs for the production while ensuring it can be done safely, she includes nothing that fails to get the actors’ “enthusiastic consent.” Any response short of that she considers a no, and respects as such.

“There’s a lot of talk about making actors comfortable,” said Ms. Warden, who choreographed the intimate moments of the most explicit productions Off Broadway last season, “‘Daddy’” and “Slave Play”; has two more Broadway projects lined up; and also works in film and television.

“I don’t use the word comfortable,” she continued, “because most of our really exciting drama is not comfortable. My job is to make sure that my actors are confident in what is happening so they can do their work.”

And building that confidence requires great sensitivity. Trust on all sides is paramount.

The last time Ms. McDonald was on Broadway, in the 2016 musical “Shuffle Along,” the production coincided with one of those major moments in life that she and her husband, the actor Will Swenson, jokingly call “plot twists”: Unexpectedly, she was pregnant. That October, she gave birth to her second child.

“I never in a million years would’ve thought that, three years later, just: in the buff,” she said of her Broadway return. “The crazy thing is, too, I’m still nursing. It’s been a very wild sort of experience to be literally teetering on perimenopause, naked onstage and still nursing my child through the night most nights.”

The nudity is always an attention-getter in “Frankie and Johnny,” the rare play that puts middle-aged physiques on display. Ms. McDonald didn’t know as she prepared for the role how she would find the bravery to do it — especially after she watched a videotape of Kathy Bates as the original Frankie. She remembers telling herself, “Don’t be vain, Audra, because playing Frankie is not about her being beautiful. It’s not about her body being perfect.”

Still, she was cautious, and Ms. Arbus allowed her to ease in. It wasn’t until the show had moved into the theater and started technical rehearsals that Ms. McDonald and Mr. Shannon at last removed their clothes — a step that Ms. Warden said she doesn’t believe in rushing anyway.

Natasha Katz, the Tony-winning lighting designer, was one of only four other people allowed in the house that first day. She’d promised Ms. McDonald that she would take care of her, and she has, bathing the set in moody light that gives the actors someplace to hide.

And Ms. McDonald is O.K. up there. She trusts her co-star. She feels safe.

The illusion of eroticism

“What I always say about sex scenes, my dumb joke about them,” Mr. Shannon said, “is that they really are like sex. They have all the confusion and loneliness and anxiety and despair, just none of the pleasure.”

It’s a pretty smart joke, actually, and as he talked about the practicalities of performing those scenes, he stripped away the illusion of eroticism that they’re meant to create.

Such as: Getting his clothes off and scrambling into bed during the blackout at the top of the show, while Ms. McDonald climbs in from the other side, is fraught with logistical challenges.

“There’s been a couple of times where we’ve bumped heads,” he said. “There was one time where I was convinced I had a bloody lip. Thank God it wasn’t. It just hurt.”

But physical hazards are one thing. As respectfully as Mr. Shannon spoke of his colleagues, and of the process that Ms. Warden has used, he was gruff when it came to the notion of anyone looking out for his emotional well-being — even on a job that makes him “incredibly vulnerable,” as he acknowledged that playing Johnny does.

Which doesn’t mean he can’t see the value of an intimacy director.

“I really did appreciate being able to have Claire, just to talk to,” he said. “But I’m not going to lie. Most of what I said to Claire was ‘I just want Audra to be comfortable.’ ”

Here’s the thing, though. Whole generations of actors have been trained to believe that the only acceptable answer to a performance challenge — no matter how unsafe it might be, physically or emotionally — is yes. Drawing a red line is not an option.

Intimacy directors would like, urgently, to make it one.

“We are having to, at a fundamental level, subvert the conditioning that all actors are put through — right from like, high school acting — which is that no is a dangerous word,” Ms. Warden said. “We’re subliminally told and conditioned that if I say no — to anything — I’m being the diva. Or I’m not dedicated enough. Or I don’t want it enough.”

Boundaries, she insists, can be beneficial to the work — not only because they allow actors to feel secure enough to perform at their best, but also because they can amp a show’s artistry.

“If we just say yes to the first idea we all have,” Ms. Warden said, “then we never get the brilliant stuff.”

Faced with a no, artists may venture deeper into creative territory, searching for a serendipitous workaround that’s even better than the original thought. Ms. Warden’s suddenly in-demand job is to help them find it.