Hal Holbrook, Actor Who Channeled Mark Twain, Is Dead at 95

Hal Holbrook, who carved out a substantial acting career in television and film but who achieved his widest acclaim onstage, embodying Mark Twain in all his craggy splendor and vinegary wit in a one-man show seen around the world, died on Jan. 23 at his home in Beverly Hills, Calif. He was 95.

His death was confirmed by his assistant, Joyce Cohen, on Monday night.

Mr. Holbrook had a long and fruitful run as an actor. He was the shadowy patriot Deep Throat in “All the President’s Men” (1976); an achingly grandfatherly character in “Into the Wild” (2007), for which he received an Oscar nomination; and the influential Republican Preston Blair in Steven Spielberg’s “Lincoln” (2012).

He played the 16th president himself, on television, in Carl Sandburg’s “Lincoln,” a 1974 mini-series. The performance earned him an Emmy Award, one of five he won for his acting in television movies and mini-series; the others included “The Bold Ones: The Senator” (1970),his protagonist resembling John F. Kennedy, and “Pueblo” (1973) in which he played the commander of a Navy intelligence boat seized by North Korea in 1968.

Mr. Holbrook was a regular on the 1980s television series “Designing Women.” He played Willy Loman in “Death of a Salesman,” Shakespeare’s Hotspur and King Lear, and the Stage Manager in Thornton Wilder’s “Our Town.”

But above all he was Mark Twain, standing alone onstage in a rumpled white linen suit, spinning an omnisciently pungent, incisive and humane narration of the human comedy. 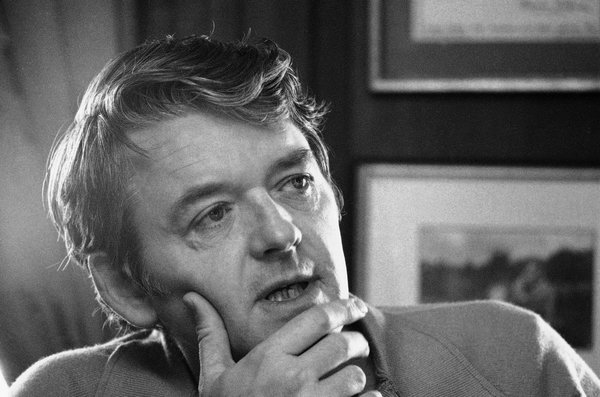 Mr. Holbrook never claimed to be a Twain scholar; indeed, he said, he had read only a little of Twain’s work as a young man. He said the idea of doing a staged reading of Twain’s work came from Edward A. Wright, his mentor at Denison University in Granville, Ohio. And Mr. Wright would have been the first to acknowledge that the idea had actually originated with Twain himself — or rather Samuel Clemens, who had adopted Mark Twain as something of a stage name and who did readings of his work for years.

Mr. Holbrook was finishing his senior year as a drama major in 1947 when Mr. Wright talked him into adding Twain to a production that Mr. Holbrook and his wife, Ruby, were planning called “Great Personalities,” in which they would portray, among others, Robert and Elizabeth Barrett Browning, John Alden and Priscilla Mullins, and Queen Victoria and Prince Albert.

Mr. Holbrook had doubts at first. “Ed, I think this Mark Twain thing is pretty corny,” he recalled telling Mr. Wright after the first rehearsals. “I don’t think it’s funny.”

But Mr. Wright prevailed upon him to stay with it, and in 1948 the character came along when the Holbrooks took to the road with a “Great Personalities” touring production.

They first tried the Twain sketch before an audience of psychiatric patients at the veterans hospital in Chillicothe, Ohio — a circumstance Mr. Holbrook explains only vaguely in his 2011 memoir, “Harold: The Boy Who Became Mark Twain.” In the sketch, Mr. Holbrook’s cantankerous Twain was interviewed by Ruby Holbrook:

“Whom do you consider the most remarkable man you ever met?”

“But how could you have ever met George Washington if you’re only nineteen years old?”

“If you know more about me than I do, what do you ask me for?”

The patients stared straight ahead — “No one was looking at us,” Mr. Holbrook wrote — and guffawed at the laugh lines, proving that “the guys in the ward were saner than they looked” and that the material had legs.

The Twain piece became their most popular sketch over the next four years, as the couple crisscrossed the country performing for schoolchildren, ladies’ clubs, college students and Rotarians.

Mr. Holbrook began developing his one-man show in 1952, the year Ms. Holbrook gave birth to their first child, Victoria. He soon looked the part, with a wig to match Twain’s unruly mop, a walrus mustache and a rumpled white linen suit, the kind Twain himself wore onstage. From his grandfather, Mr. Holbrook got an old penknife, which he used to cut the ends off the three cigars he smoked during a performance (though he was not sure whether Twain ever smoked onstage). He sought out people who claimed to have seen and heard Twain, who died in 1910, and listened to their recollections.

He had more or less perfected the role by 1954, the year he began a one-man show titled “Mark Twain Tonight!” at Lock Haven State Teachers College in Pennsylvania.

Two years later he took his Twain to television, performing on “The Ed Sullivan Show” and “The Tonight Show.” In the meantime he had landed a steady job in 1954 on the TV soap opera “The Brighter Day,” on which he played a recovering alcoholic. The stint lasted until 1959, when, tiring of roles he no longer cared about, he opened in “Mark Twain Tonight!” at the Off Broadway 41st Street Theater.

By then the metamorphosis was complete. With his shambling gait, Missouri drawl, sly glances and exquisite timing, Hal Holbrook had, for all intents and purposes, become Mark Twain.

“After watching and listening to him for five minutes,” Arthur Gelb wrote in The New York Times, “it is impossible to doubt that he is Mark Twain, or that Twain must have been one of the most enchanting men ever to go on a lecture tour.”

But for Mr. Holbrook, the Mark Twain guise he put on every night was a mask; behind it, he wrote in his memoir, was a lonesomeness that had plagued his early life, beginning when his parents abandoned him as a small child. As an adult he found his marriage, his fatherhood and even his stage life caught in an existential deadlock, with “survival and suicide impulses working in tandem.” His escape, he said, was punishing amounts of work, not to mention the company of friends like Tom Sawyer and Huck Finn.

In his memoir, Mr. Holbrook described an emotional low point in the early 1950s. He was sitting in a hotel room at the end of a long day, still undecided about doing an all-Mark Twain show and feeling lost, when he began rereading “Tom Sawyer” for the first time since high school.

“You heard the voices coming right off the page,” he wrote. “This was a surprise, and after a while I began to feel pleasant with myself and that was a surprise, too. Bitterness receded and in its place a boy came crowding in, his friends came in and his family, and it wasn’t very long before I did not feel so lonely anymore. Mark Twain had cheered me up.”

Harold Rowe Holbrook Jr. was born on Feb. 17, 1925, in Cleveland. He was 2 years old when his parents left him. His mother, the former Aileen Davenport, ran off to join the chorus of the revue “Earl Carroll’s Vanities.” Harold Sr. went to California after leaving young Hal in the care of grandparents in South Weymouth, Mass.

The young Mr. Holbrook spent his high school years at the Culver Military Academy in Indiana and then enrolled at Denison to major in the dramatic arts, but his education was interrupted by service as an Army engineer during World War II. He was stationed for a while in St. John’s, Newfoundland, where he joined an amateur theater group and met Ruby Elaine Johnston, who became his first wife. The couple returned to Denison after the war, and Mr. Holbrook soon became Mr. Wright’s prize student.

After he became an established attraction in the United States, Mr. Holbrook took “Mark Twain Tonight!” to Europe, performing in Britain, Germany and elsewhere. German audiences roared when he presented Twain’s view of Wagnerian opera: “I went to Bayreuth and took in ‘Parsifal.’ I shall never forget it. The first act occupied two hours and I enjoyed it, in spite of the singing.”

Mr. Holbrook toured the country with the show several times a year, racking up well over 2,000 performances. He compiled an estimated 15 hours of Twain’s writings, which he dipped into whenever his routine needed refreshing. He won a Tony Award in 1966 for his first Broadway run in “Mark Twain Tonight!”

Mr. Holbrook was 29 when he started playing Twain at 70; as he grew older, he found he needed less and less makeup to look elderly. He continued the act well past his own 70th birthday, returning to Broadway in 2005, when he was 80.

After playing Twain for more than six decades, he abruptly retired the role in 2017. “I know it must end, this long effort to do a good job,” he wrote in a letter to the Oklahoma theater where he had been scheduled to perform. “I have served my trade, gave it my all, heart and soul, as a dedicated actor can.”

Mr. Holbrook made his Broadway debut in 1961 in the short-lived “Do You Know the Milky Way?” He returned there in the musical “Man of La Mancha,” in Arthur Miller’s “After the Fall” and other plays.

His scores of television appearances included “That Certain Summer” (1972), a groundbreaking film in which he starred as a divorced man who must ultimately admit to his son that he has a gay lover (Martin Sheen). In the early 1990s he had a recurring role on the sitcom “Evening Shade.”

Mr. Holbrook’s many film roles tended to be small ones, although there were exceptions. One was as the mysterious informant Deep Throat in “All the President’s Men,” the 1976 film adaptation of the book by Bob Woodward and Carl Bernstein about the Watergate cover-up. Another was in “The Firm” (1993), based on John Grisham’s corporate whodunit, in which Mr. Holbrook played the stop-at-nothing head of a Memphis law firm.

His Oscar-nominated performance, in “Into the Wild,” directed by Sean Penn, was as a retired military man who has a desert encounter with a young man on a quest for self-knowledge that would ultimately take him to the Alaskan wilderness. His final screen roles were in 2017, when, at 92, he guest-starred in episodes of the television series “Grey’s Anatomy” and “Hawaii Five-0.”

He is survived by his children as well as two stepdaughters, Ginna Carter and Mary Dixie Carter; two grandchildren; and two step-grandchildren.

In adapting Mark Twain’s writing for the stage, Mr. Holbrook said he had the best possible guide: Twain himself.

“He had a real understanding of the difference between the word on the page and delivering it on a platform,” he told The San Francisco Chronicle in 2011. “You have to leave out a lot of adjectives. The performer is an adjective.”