Denise Roberts Hurlin was a member of the Paul Taylor Dance Company in 1991, which meant she could not avoid the terrifying reality of AIDS. “So many friends and colleagues were getting sick and dying,” she recalled recently. “So many.”

Two of the sick, soon to die, were in the Taylor company: Christopher Gillis and Jeffrey Wadlington. Ms. Hurlin and her dancer friends, especially another Taylor member, Hernando Cortez, decided they needed to do something. They founded an organization called Dancers Responding to AIDS.

In the years since, that organization (which became part of Broadway Cares/Equity Fights AIDS in 1993) has raised millions of dollars. At the start, though, it was tricky to find somewhere to hold money-raising events that didn’t cost a lot. Mr. Cortez, who had a timeshare on Fire Island, had the idea to try there. They laid down vinyl flooring on someone’s bayside deck, set out chairs by the pool, and put on a show that pulled in about $8,000.

That was the first Fire Island Dance Festival, in 1995. This year’s installment, the 25th, has already raised more than $600,000, and the events don’t even start until Friday. (It runs through Sunday, with a sun shade and chilled water for audiences, and an indoor venue ready in case of rain.) 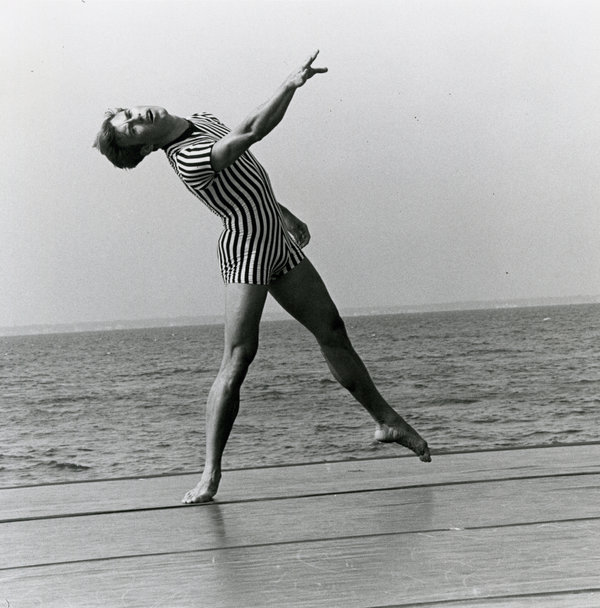 The biggest change, Ms. Hurlin said, came in 2004, when the festival moved to the largest property on the island. “It has this fabulous position, where the shoreline curves, so you’re facing the sunset,” she said. “We cover the pool and build a stage right up against the sea wall” — a stage that has to be rebuilt each year — “so it looks like the dancers could jump right into the water.”

That move expanded the audience capacity, while the picturesque location increased the allure. But the festival resonated with Fire Island residents from the beginning. “Just as our dance world was affected by AIDS, so was this community,” Ms. Hurlin said. “We needed each other.” Beyond attending the shows, many Fire Island residents host dancers in their homes.

And then there are the volunteers — the stage managers, lighting designers, costumers, technicians and grunts who help out each year, many scheduling their vacations so that they can work the festival. “It’s a full-circle community experience,” Ms. Hurlin said.

Of the three shows each year, the sunset performance on Saturday is the most popular. The dancers and choreographers who participate tend to be big names. This time, Michelle Dorrance, Kyle Abraham, Christopher Wheeldon and James Whiteside, among others, are all offering short premieres.

The location is a draw for them, too. “There’s nothing else like performing on that stage,” said Robert Fairchild, the New York City Ballet dancer turned Broadway star, who is tapping in Ms. Dorrance’s premiere. “The wind that blows off the water, the exposure to nature — it’s such an incredible feeling.”

“The tone is set by the cause,” said Mr. Whiteside, a principal dancer with American Ballet Theater. “It’s sobering but also a greater-than-you feeling, and a joy.”

The sense of camaraderie is high. The meals and outdoor dressing rooms are communal. Parts of the dance world that don’t often mingle — ballet, tap, Broadway, contemporary — mingle here. And connections happen.

The first time that Kyle Abraham, a contemporary choreographer and dancer, performed at the festival, in 2011, he met Wendy Whelan, then a principal dancer with New York City Ballet. She was a star, and he wasn’t yet. “She asked me if I would ever consider making something with her,” Mr. Abraham recalled. “I started laughing hysterically. Are you serious? Of course!”

They ended up working together on Ms. Whelan’s show “Restless Creature.” Brian Brooks, another choreographer Ms. Whelan met at the festival, was also part of that production.

Some dancers meet donors. Mr. Wheeldon met his husband, Ross Rayburn. A yoga instructor, Mr. Rayburn didn’t know much about dance then. At a cocktail party, he and Mr. Wheeldon hit it off. The next day, Mr. Wheeldon, one of the world’s foremost ballet choreographers, got to show Mr. Rayburn one of his dances, performed by Ms. Whelan against an unbeatable backdrop of sea, sky and sunset.

“If this doesn’t seal the deal, I don’t know what will,” Mr. Wheeldon recalled thinking. It worked.

Over the years, as the nature of the AIDS crisis has changed, Dancers Responding to AIDS has expanded beyond the single focus on AIDS and dancers into meal delivery and addiction and recovery services. “There is still a huge need,” Ms. Hurlin said, “but it’s broader, bigger. We’re able to incorporate more people into the mission.”

“I think that’s positive,” she continued, “moving forward with celebration, as opposed to sorrow.”

This year’s festival, hosted by Joel Grey, should have some of both. The premiere that Mr. Whiteside has choreographed — which he described as “a juxtaposition of extreme beauty and camp” — is for two fast-rising Ballet Theater members, Aran Bell and Ms. Hurlin’s daughter, Catherine.

“Catherine has filled in a couple of times when she was younger,” the elder Ms. Hurlin said. “Lately, she’s been helping with load in and ushering. But this year, I told her, ‘You have to dance.’”

The Paul Taylor company is also returning, performing part of Taylor’s haunting “Sunset.” Since Taylor himself died last year, that loss will further tinge the dance with sorrow.

For Ms. Hurlin and others, it has another resonance. Its duet for two men was originally performed by Mr. Gillis and Mr. Wadlington, the friends whose illness spurred the creation of Dancers Responding to AIDS, which has since helped so many but didn’t save them. When “Sunset” is performed at sunset on Saturday, the tears in some eyes won’t be from the glare.