Home » Entertainment » Fat Joe on the year anniversary of hosting a nightly, news-breaking Instagram Live talk show in a pandemic Fat Joe on the year anniversary of hosting a nightly, news-breaking Instagram Live talk show in a pandemic

When the COVID-19 pandemic hit in March of last year, Roc Nation rapper Fat Joe started taking to Instagram Live each night as a way to entertain himself and commiserate with his millions of followers on the platform.

“I thought it was a real special time to get on the Live and start communicating with my fans and followers,” Joe told Insider in a phone interview last week. “Just letting them know that we’re all scared together, but we’ll get through this.”

Over the next few months, Joe’s nightly Instagram Live appearances — which initially featured conversations with his friends in the entertainment industry — evolved into a wide-ranging talk show with notable guests across diverse fields.

“The Fat Joe Show,” as the show became known, has brought the rapper a news-breaking interview with Alexandria Ocasio-Cortez, when the US representative from New York announced on the show in April, for the first time publicly, that she would vote for the then-Democratic presidential candidate Joe Biden for president.

Other high-profile guests on the show have included Dr. Anthony Fauci, New Jersey senator Cory Booker, Floyd Mayweather, Jamie Foxx, Mike Tyson, Snoop Dogg, and Shaquille O’Neal, among many others. Months after Joe interviewed Diddy on the show, the hip-hop icon and entrepreneur set Joe up with a syndication deal on his cable network, Revolt TV, to broadcast “The Fat Joe Show” on television.

Around the one-year anniversary of his first IG Live show, Fat Joe spoke to Insider about the trajectory of “The Fat Joe Show,” his work on a “soundtrack” project he’s releasing to accompany the show, and his plans for the show, and life, after the coronavirus pandemic.

This interview has been lightly edited and condensed for clarity.

I’ve really got a lot of respect for the show, and the work you’ve been doing.

Thank you so much, man. It’s for the people by the people. You know, when I started the show, Corona had just hit, and everybody was afraid, including myself. I thought it was a real special time to get on the Live and start communicating with my fans and followers. Just letting them know that we’re all scared together, but we’ll get through this. Then one day later led to the next day, and the next day. And all my friends, the biggest people on Earth, started clicking in and going on Live with me. Then we realized after like a week straight of going on every day at eight o’clock that it was an actual show.

And so, a lot of phrases been coined after the show. You know, it’s really “The Fat Joe Show,” but we call it “The Big, Big Show.” There’s something called a “Joprah Moment,” where we get artists and we get whoever we interviewed to talk about something we had never heard about before. We seen a lot of these people in hundreds of interviews, but never seen them talk about certain stories and situations. So we call that a “Joprah Moment.”

We also have a moment called “You Don’t Know Who I Know.” Because I’ve been in the rap game for over 25 years, and I’ve walked everything from the streets, to the music industry, to so many moments, that people don’t realize I got so many relationships. And when I bring somebody on, they’re like, “No way on earth he knows Lorenz Tate.” “There’s no way he knows Mike Tyson,” you know? And then after we talk about personal stories we have together and history, when they leave, I hit ’em with the, “You don’t know who I know.” And they love it, man. The people love it.

From the jump, why was IG Live the move for it for you, as a medium? What did you see in it?

Well, it was just a way to directly communicate with my audience and my followers. It was also, you know, when Corona first started, everybody was stuck at home quarantined, and everybody was on IG. So it was a natural progression. It was a natural way to go, because everybody — you had D-Nice, you had Verzuz, you had a bunch of DJs — like everybody took it to IG. But certain ones lasted the time. 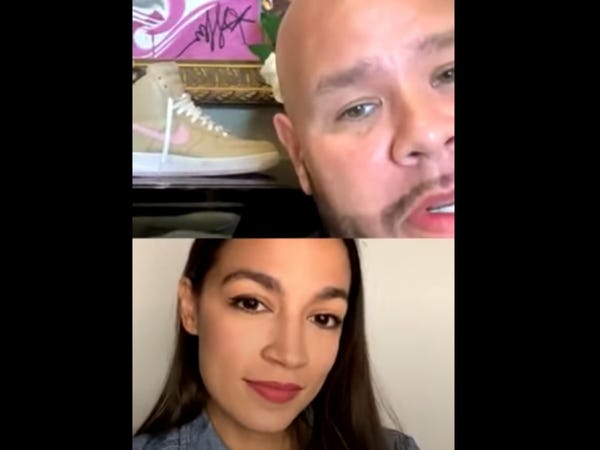 And, I mean, every day. How’s that been, just the work ethic of it?

Oh man. It’s real. I can’t do no dinners. I can’t go to basketball games on weekdays. I’m like… You know, I’m stuck [laughs]. But it’s a family show. My daughter’s the executive producer. She’s 14. She’s excited about it, even though she don’t let me know. And it gives me a sense of pride. And I like that she inspires the young girls and the young kids, 14 years old, and let them know they could be bosses. You know, it’s a family show. My wife gets the drinks ready. It’s the first time we ever could work together as a family.

What about the Revolt partnership, what was the story behind that? How did you link up with them?

Well, you know, Puff came on one time, and he’s the one who called me “Joprah.” And it turned to more than just a moment. He contacted me and was like, “Yo, I want to get it on Revolt. And let’s take it from there.” So it’s great to give us more eyes on the show, as well as more reach to people. And, you know, we talk about real things, brother. Like we talk about real issues, man, that affect our community. And nobody who’s done as much as me in the entertainment world — you know, people don’t get political in the entertainment world. People mind their business, keep it moving. They always want to be what we call “politically right.” Well with me, I really don’t need much. You know what I mean? People tend to sway their views or talk to who their boss is or who their corporate people are. I don’t do that. I’m for the people, and I’m blessed. And I stick with the people, whether I got a trillion dollars or I’m broke, you know, I speak for my people.

On the music front, what can you tell me about the project you have in the works related to the show?

You know, this is a pretty genius aspect of this whole show, is I decided to make a soundtrack for the show [laughs]. It’s a show on IG, we making a soundtrack. It’s called “The Big, Big Show.” The first single is out now. If you heard the Luther Vandross, Rihanna, it’s called “Sunshine (The Light).” Once again, we call this like “quarantine music,” because this music was made to uplift the people and make them feel good. You know, a lot of people been passing away. A lot of people been losing their jobs. A lot of people been going through emotional stress, you know, mental issues. And so we try to make music, me and my brother DJ Khaled, and Dre of Cool & Dre, to just uplift the people. Bring the summer in fast. We dropped the summer banger in the winter. To usher the summer in fast.

How are you looking forward to the end of this tragedy we’ve all been through? What are you thinking about the end of the pandemic?

I mean, I’m thinking July 4th. But, you know, the good news is, one hundred years ago, this happened with the Spanish flu. Same thing. There’s pictures of guys on the Navy ship with the mask on. Same thing. But they were far more unsophisticated than us in recent times with medicine and technology. And so now it’s a hundred years we’ve lived our whole life like it was normal walking around without a mask. So I have to believe, if you know where you came from and know where you going, know your history, that sooner or later, I can’t tell you when — I’m thinking deep in the summer or whatever — that we’ll be able to walk around without a mask. When everybody gets vaccined, this thing they call herd immunity. So it will go back to regular life again. We just, sh-t, we just can’t wait till it does, you know?

Are you gonna keep it on IG Live or will you do any in-person type of thing?

You know, I’m thinking about getting a bigger platform. Meaning like Amazon, Apple, Netflix. One of those. I partnered up with Diddy, and we’re going to get it on there. And it’ll be like a David Letterman meets Arsenio Hall. Real set, real band, real DJ. You know, something big. Something sexy.