Home » Entertainment » Even if Matt Hancock wins I'm A Celeb, he's 'only destined for Wetherspoons' Even if Matt Hancock wins I'm A Celeb, he's 'only destined for Wetherspoons' 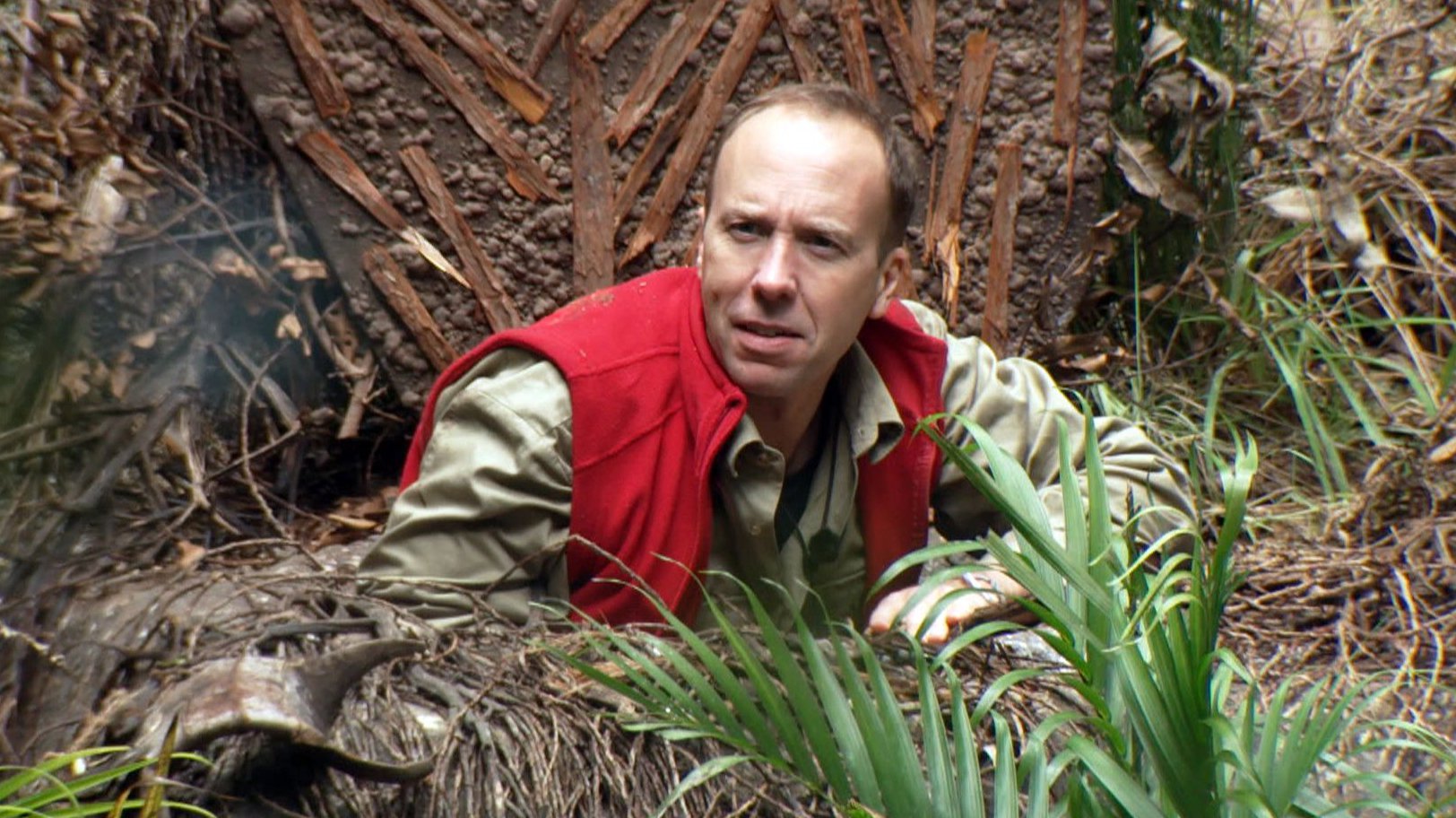 Matt Hancock has been desperately trying to redeem himself in the I’m A Celebrity… Get Me Out Of Here! jungle after his reputation crashed and burned as a result of his own actions during the pandemic.

And, arguably, it seems to be working so far as he has yet to be eliminated from the ITV show, which has so far booted out Babatunde Aléshé, Boy George, Sue Cleaver, Scarlette Douglas, and Charlene White.

Over the course of his journey on the programme, the former health secretary revealed to his fellow campmates that he’s seeking forgiveness for his handling of the Covid crisis and exposed affair with aide Gina Coladangelo.

Hancock also said that breaking his own guidance was a ‘mistake’ but he did it because he ‘fell in love’.

But now he’s been given the platform for a redemption arc, what could Hancock’s career in entertainment look like after I’m A Celebrity? Will he be given his own spin-off show or tell-all documentary? Will he achieve celebrity status?

What will happen if Matt Hancock actually wins I’m A Celebrity?

First things first, let’s have a look at whether going on the show has harmed Hancock’s reputation.

Alex Andrew, reputation specialist at The PHA Group tells Metro.co.uk that as it currently stands, the politician hasn’t done any damage so far, which might be frustrating news for some.

Despite winning many people over though, Andrew suggests there shouldn’t be too much to panic about because it’s improbable he’ll be the next big thing – even if he is miraculously crowned King of the Jungle.

‘With the odds and the country stacked against his win, it’s unlikely Hancock will reach the final of I’m A Celebrity, but so far, he has done well to deceive the public as to his true character with empty apologies and pre-planned responses,’ he says.

‘If he did win the show, it would project his reputation and translucent celebrity status in the right direction for club-night guest appearances and DJ slots in Wetherspoons but do little for West Suffolk residents.

‘With the sycophantic publication of his book, he’s already taken the first step into the political afterlife of speaking opportunities and deck chairs.

‘Hancock’s appearance in the jungle has regained the public’s trust in him as human, but not enough to heal the reputational wounds as a competent, principled political leader.’

With all that in mind, let’s have a look into what Hancock’s television career could look like after I’m A Celebrity.

Will Matt Hancock be all over our television screens after I’m A Celebrity?

Don’t forget, we haven’t actually seen the last of him yet as he’s due to appear on Channel 4’s Celebrity SAS: Who Dares Wins next year.

It’s also likely that he will be on ITV’s daytime shows such as Good Morning Britain, Lorraine, This Morning, and Loose Women, to be grilled on his time on the show.

But, does Hancock stand a chance in landing a programme of his own?

According to PR specialist Andy Barr, who is the CEO of 10 Yetis, Hancock will be being watched like a hawk by television execs and his appearance in the jungle will be seen as an audition, if you like.

‘His gentle probing of Chris Moyles about his leaving the BBC may have been dull for the viewers to watch but will have been keenly observed by the likes of Channel 5, who may be looking for new, affordable “talent” who carry a high profile and following,’ he tells Metro.co.uk.

‘Channel 5 are the ones who I expect could make the first offer to give Hancock a dedicated TV show, but if his ratings in the eyes of the public continue to rise, as they have done so far during his stint in the jungle, then he may hold out for something more mainstream.’

He adds: ‘I fully believe Hancock will become a talking head everywhere he can in order to keep his profile high and help him with his core aim of becoming mainstream enough to be given a show in his own right.’

Will Matt Hancock ever reach celebrity status after I’m A Celebrity?

It is not lost on I’m A Celebrity viewers that Hancock himself is not a celebrity – and many want him to keep it that way.

But could his stint in camp, which is no doubt raising his profile, lead him to become a fully-fledged famous name that we’ll see on red carpets and at glitzy showbiz events?

Culture and brand expert Nick Ede tells us: ‘Matt Hancock is not a celebrity. He isn’t someone to be celebrated. After all, the word is about elevating someone to a higher level.

‘Having him on a red carpet will not elevate a brand or a cause so I think he will be left in a media personality purgatory once I’m A Celebrity and Celebrity SAS: Who Dares Wins are over.’

Ede reckons Hancock will ‘never redeem himself’ although believes he will attempt to solider on as a media personality that ‘no one wants to celebrate or be associated with’.

‘This for any agent or TV producer is a difficult thing to manage or to understand where he fits in in the great jigsaw that is celebrity,’ he adds.

‘The door to Matt Hancock’s political career was well and truly slammed shut the moment he announced his appearance on I’m a Celebrity,’ he adds.

‘But to suggest that the door to a new life as a celeb will be opened is farcical, at best.

‘There is more chance of Donald Trump becoming an ambassador for the #MeToo movement than Matt Hancock ever enamoring himself as someone who the public will want to see blazoned across their screens once his time in the jungle is over.

‘To be a celebrity means having “something” about you – an appeal that people can resonate with, be in awe of, or desire to emulate. Matt Hancock has none of these things.’

It’s not unusual for stars to leave the camp and sign mega-brand deals. In 2020, queen of the jungle Jacqueline Jossa reportedly signed a six-figure pay cheque with the fashion brand In The Style.

Chad Teixeira, the CEO & Head of Talent at Daddy The Agency, believes Hancock can expect to gain traction for both brand partnerships and other profiling opportunities, including online media, newspapers and broadcast.

‘He brings high engagement, because he is quite a controversial character: you either love him or hate him,’ Teixeira tells us.

‘Hancock already has a significant following on Instagram (93.5k), which will be influential in the brands who work with him, as well as the figures he’ll receive.

‘There will be brands he doesn’t align with and there will be others who want to play it safe and not stir up their audience too much, but then there are the brands who are daring, those who see value in using him as a PR stunt, to gain traction – good or bad!

‘He’s been suspended as a Conservative MP and he’s trying to show the world another side to him – his ‘real side’, and if he’s willing to go on I’m A Celebrity, then brand deals are definitely not off the table.’

I’m A Celebrity… Get Me Out Of Here! airs tonight at 9pm on ITV.