Home » Entertainment » DMX, in a Coma, Is Set to Undergo Brain Function Tests DMX, in a Coma, Is Set to Undergo Brain Function Tests

The rapper DMX, in a coma and on life support four days after he was hospitalized, was set to undergo brain function tests Wednesday, his manager said, as fans, relatives and fellow musicians continued to hope for his recovery.

The rapper and actor, whose real name is Earl Simmons, was hospitalized after a heart attack Friday. His former manager said over the weekend that he was in a “vegetative state.”

“Everything is the same,” his current manager, Steve Rifkind, said on Wednesday. “Just waiting on the results.”

Since Mr. Simmons, 50, had a heart attack in his home in White Plains, N.Y., performers like Missy Elliott, Ja Rule and LL Cool J have posted messages of support on social media. Gabrielle Union, an actress who starred with Mr. Simmons in the 2003 movie “Cradle 2 the Grave” and LeBron James, who described Mr. Simmons as one of his favorite artists, said they were praying for him.

People have posted stories about their interactions with Mr. Simmons, who used his unadorned, gravelly voice to rap earnest lyrics about his personal suffering. 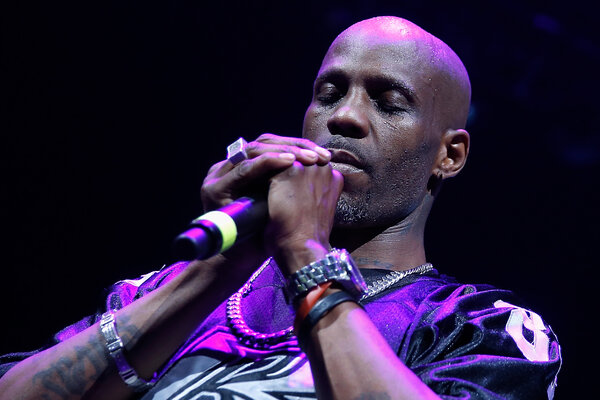 On Monday, hundreds of fans joined the rapper’s family in front of White Plains Hospital to play his music and pray for him. The crowds became so large they held up traffic at points. Vehicles that passed by, including a fire truck from the city’s fire department, honked loudly in support as the crowds cheered and chanted “DMX.”

“Everybody put up your X,” said Stephanie Reed, a friend of Mr. Simmons, as she led a prayer for him. The crowd complied, crossing their arms above their heads or in front of their chest as a clip of Mr. Simmons praying boomed from the speakers.

Some people sobbed, others lowered their heads, and some fans held up balloons spelling out Mr. Simmons’s stage name.

Ms. Reed, 52, who organized the event, said in an interview Wednesday that she was overwhelmed by the size of the crowd. At one point, she said, she saw hospital staffers in the windows holding up their arms in an X.

Ms. Reed said she saw Mr. Simmons two weeks ago when he came to Atlanta, where she lives, and cooked her spaghetti and King Crab legs. Mr. Simmons is deeply spiritual and always prayed before he performed or ate, she said.

“We’ve just got a lot of great, great memories,” Ms. Reed said. “He was like my brother. He called me sister.”

In the late 1990s, Mr. Simmons became a hip-hop powerhouse, rapping about violence and redemption in what Rolling Stone termed “the roughest and grimiest voice in hip-hop, the sound of gravel hitting the grave.”

Mr. Simmons was the first musician whose first five albums reached No. 1 on the Billboard chart. He became known for electrifying audiences at concerts with hits that include “Party Up (Up in Here),” from 1999, and “X Gon’ Give It to Ya,” from 2003. He also appeared in television shows like “Third Watch” and movies including “Never Die Alone.”

Over the years, Mr. Simmons faced repeated arrests. In 2008, he pleaded guilty to animal cruelty, drug possession and theft, and in 2018 he was sentenced to a year in prison for tax evasion. During the sentencing hearing, his lawyer played his music in Federal District Court in Manhattan to Judge Jed S. Rakoff.

“In the court’s view Mr. Simmons is a good man, a very far from perfect man,” Judge Rakoff said.