Disney, With Benefit Concert, Makes an Early Return to Broadway

Disney stage alumni will give four performances at the New Amsterdam Theater, two months before the curtains rise on “The Lion King” and “Aladdin” in New York. 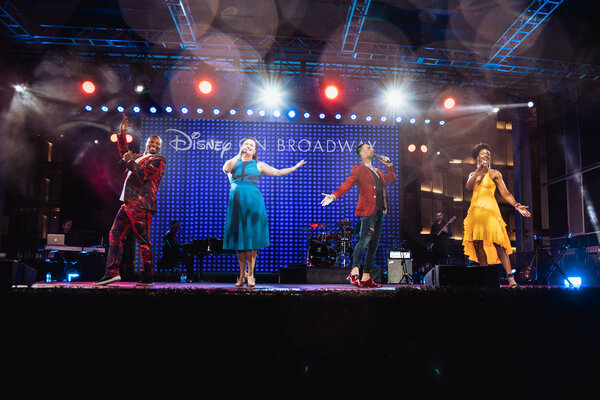 For the first time in what certainly feels like forever, classics from the Disney songbook will once again — and sooner than expected — ring out from a Broadway stage.

The New Amsterdam Theater, usually home to “Aladdin,” will briefly welcome audiences back for four concerts benefiting the Actors Fund in late July, with a handful of Disney stage alumni performing numbers from “The Lion King,” “Frozen,” “Beauty and the Beast,” “Aladdin” and others.

The concert series, “Live at the New Am,” is somewhat of a soft reopening for Disney’s theatrical division in New York, albeit without the more elaborate production elements and massive companies that its stage adaptations typically entail. “The Lion King” and “Aladdin,” along with nearly a dozen other Broadway shows, start back up in September.

“We have a concert unit, and we have a theater that’s sitting there waiting to be opened, and so it made sense to ‘what if,’” Thomas Schumacher, the president of Disney Theatrical Productions, said in a Zoom interview from London’s Lyceum Theater. (“The Lion King” is set to begin performances there later this summer, as is “Frozen” down the street.)

As of Wednesday, Covid-19 protocols for “Live at the New Am” were still in flux: Disney hasn’t yet settled whether masks will be required. Audience members will need to show proof that they are fully vaccinated; attendees under 12 are exempt but must be with a vaccinated adult. (A couple of blocks away, “Springsteen on Broadway” has similar vaccination requirements but no mask mandate.)