Ever since Nicole Kidman teased that her daughters would appear on Big Little Lies season 2, we’ve been excited to see what kind of role they would play. Now, two actors from the show have revealed that Nicole Kidman and Keith Urban’s daughters had their Big Little Lies cameo already: specifically, in the classroom scenes from episode 2, which aired last week. We can be forgiven for being distracted (a lot has happened in the past three episodes!). But thankfully, we now have details on exactly where to look to spot Kidman and Urban’s daughters on the show.

Kidman and Urban have two daughters together: Sunday (age 10) and Faith (age 8). Cameron and Nicholas Crovetti, who play the twin sons of Kidman’s character Celeste on BLL, recently revealed to the Huffington Post that Faith was heavily featured in episode 2 of this season. “In the classroom scene where I say, ‘What about a dead father?’ and we’re sitting down in a circle,” Cameron shared, “Faith was sitting next to me.” And it won’t be the last time we see her: According to Cameron, they shot “some other scenes” too.

It’s not yet totally clear whether Sunday has appeared, as she may have shot the same classroom scene as Faith, but wasn’t featured in the final edit of the episode. Either way, given that Sunday Urban is far from a typical extra, we’re sure we’ll see her face at some point in the season. 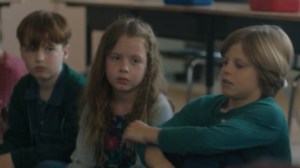 Clearly, the in-classroom drama is just beginning on BLL, as the parents of Monterey take on their kids’ teachers for their lessons about climate change. We’ll likely see a lot more of the classroom dynamic as we learn how this plays out — and that means plenty of opportunities to see more of Sunday and Faith.

Barry Jenkins: No Matter the Format, Filmmaking Is as Expensive as Ever