During the summer of 2020, as protesters took to the streets after the deaths of George Floyd, Ahmaud Arbery and Breonna Taylor, and the United States once again reckoned with fierce racial and ideological divides, the Chicago-based vocalist, producer and sound artist Damon Locks found himself at a creative impasse.

“Where Future Unfolds,” his 2019 album as the leader of the 18-member Black Monument Ensemble, expressed the pain of seeing Black people killed without adequate justice. Should — and could — Locks gather the Ensemble during the pandemic to record new music in response to what was happening around them?

“The challenge was, ‘What would I say now?’” Locks, 52, said in a recent phone interview from Logan Square. “And when breath is the most dangerous thing around, how do you record up to six people singing?”

He emailed a local studio engineer about recording with a condensed version of the group in the building’s backyard garden. Two obstacles made themselves evident. One, it was hot. “I think it was like 93 degrees the first day, which is a lot,” Locks said. Then there were the cicadas; they were chirping so loudly you would’ve thought they were in the band.

“They were seriously right on beat a number of times,” said the clarinetist Angel Bat Dawid, who plays in the Ensemble.

Undeterred, Locks and the Ensemble convened at Experimental Sound Studio in late August and recorded what would become “Now,” the band’s new album, out Friday. Where the group’s 2019 LP spun racial disharmony into a sacred celebration of Blackness, the new record envisions an alternate universe of infinite possibility. “The moment ‘now’ is not accounted for,” Locks said. “So anything can happen, you know?”

Partially inspired by sci-fi shows like HBO’s “Watchmen” and “Lovecraft Country,” where Black people literally transport themselves out of perilous situations, “Now” uses up-tempo electro-funk and lyrics that spin societal despair into forward-looking optimism. The album — and Locks’s music, in general — also explores the concept of “the Black nod,” or the unspoken mode of communication between Black people in public spaces. In turn, Locks’s Ensemble work — with all its spiritual jazz arrangements, vibrant drum breaks and esoteric movie clips — feels overtly communal, like a private conversation between those who understand the nuances of Black culture.

“To me, the nod speaks to this destabilized scenario in the United States and acknowledges that you’re here,” Locks said. “‘I understand that this is crazy, so I see you.’” Locks, who also teaches art in Chicago Public Schools and at the Stateville Correctional Center, a maximum security men’s prison about an hour outside of Chicago, said he was encouraged by the activism he saw in the wake of protests and the pandemic. “I took inspiration from people checking in on people, people trying to get money from one place to the other, trying to find ways to get food to people who didn’t have food,” he said.

Locks grew up in Silver Spring, Md., and was introduced to punk as an eighth-grader. One year later, he started going to punk and hardcore shows just down the road in neighboring Washington, D.C., where he saw now-legendary bands like Minor Threat and Bad Brains.

As a nascent musician and visual artist, he loved the freedom these groups exercised onstage. That inspired him to create work based on his own feelings, regardless of what was popular. In 1987, as a freshman at the School of Visual Arts in New York, he became fast friends with a classmate named Fred Armisen, who’d only gone to the college to form a band. (“Because all of my favorite bands were art school bands,” Armisen said in a recent interview.) Armisen couldn’t really find anyone to play with, until he met Locks, who had spiky red-and-black dreadlocks. 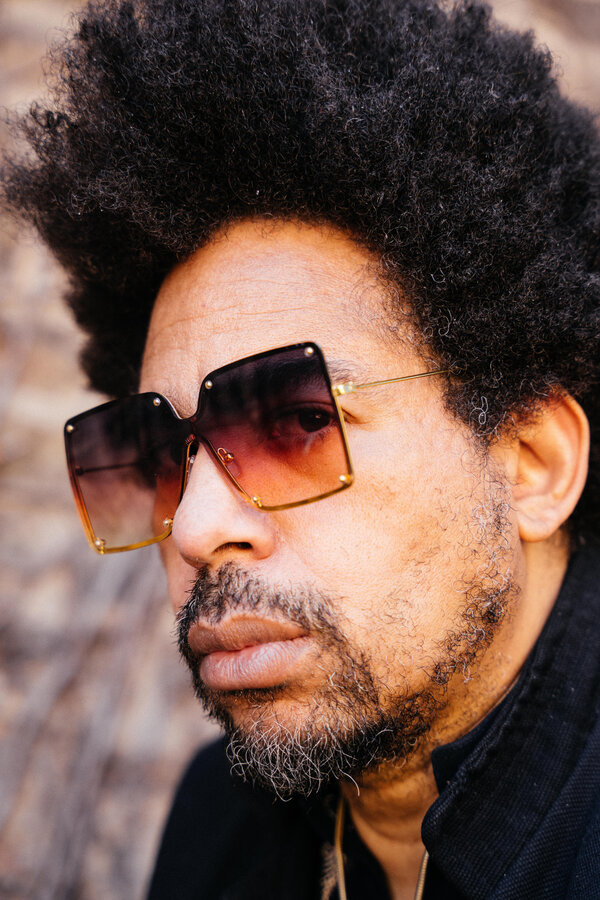 “Damon had a jacket with the Damned painted on it, and I loved the Damned,” Armisen remembered. A year later, Locks transferred to the School of the Art Institute of Chicago. Instead of saying goodbye, Armisen dropped out of S.V.A. and moved too. Another friend and bandmate, the bassist Wayne Montana, followed suit. “That’s how much I believed in him,” Armisen said. They started the experimental rock band Trenchmouth in 1988.

The band lasted eight years, during which Locks earned acclaim as a powerful vocalist, performer and visual artist. He made the band’s fliers, collagelike drawings mixing intricate sketches and printed images, which he photocopied at Kinko’s. “That’s the first place where I was like, ‘Oh, this guy is just a genius,” Armisen said. “This is a brilliant person who cares about every millimeter of what something looks like and sounds like.”

After Trenchmouth split, Locks and Montana formed the Eternals, an amorphous outfit with a sound rooted in reggae and jazz. Where Trenchmouth scanned as punk and post-hardcore, the Eternals tried to be even weirder. “We let that free openness overtake the music,” Montana said. “We started using some samples and clips from movies in Trenchmouth, but as we got older and bought more equipment, it allowed tonal things to happen that we were always reaching for.”

Locks was doing a studio residency at the Hyde Park Art Center in 2017 when he had the idea of putting singers together to expand the sound of his performances. He contacted Josephine Lee, the director of the Chicago Children’s Choir, who sent him a list of five adult singers who could bring his songs to life. The first performance was in his art center studio, where “I just opened the doors and put chairs out in the hall,” he said. The band landed a gig at the Museum of Contemporary Art Chicago. The percussionists Arif Smith and Dana Hall agreed to do the show. The cornetist Ben LaMar Gay, a friend of Locks’s, joined, too.

The band’s breakthrough performance came in 2018 at the Garfield Park Conservatory as part of the Red Bull Music Festival, where Locks brought in dancers, a few new singers and Dawid, who filled in for Gay. The Black Monument Ensemble was born; “Where Future Unfolds” is a live recording of the Garfield Park performance. The group’s membership, and size, is fluid: “Some of the singers have changed over time but I consider it a family and possibly folks might show up again.” Locks said.

On “Now,” Locks purposely left studio chatter on the album to underline the band’s kinship. (Listeners can experience the joy that comes after the sessions are done, as the melody fades and the Ensemble applauds the take.) “For it to be such a hard time right now, and for us to have this time to record, it was absolutely beautiful,” Dawid said. “We were just thankful to see each other again.”

Locks said that his art is designed to speak one-on-one with the receiver. “I’m just trying to communicate as a human being,” he said. “The idea is to be in classrooms talking to students, to be in Stateville talking to artists who are incarcerated, trying to get their voices out there.” And with the collective anguish endured over this past year, he hopes “Now” can bring some positivity: “I’m talking about things that inspire me and passing that along.”

‘Why’d you volunteer – you get paid at ITV’ Ranvir Singh mocked for asking ‘What’s that?’
Recent Posts