Home » Entertainment » Celeste, a Young Singer With an Old Soul, Makes Her Move Celeste, a Young Singer With an Old Soul, Makes Her Move

The best way to learn about Celeste, the rising British soul singer and songwriter with a gift for channeling earlier eras, is to ask about her songs.

Take “Ideal Woman,” the opening track on her first major-label album, “Not Your Muse,” which was released last Friday. In it, she sings, “Please don’t mistake me for somebody who cares” with a husky, jazzy sang-froid that calls to mind Billie Holiday. The lyrics reflect ongoing insecurities she’s had in relationships. “I would always think, maybe boys don’t like me because I’m too tall,” she said evenly during a recent video interview. “Or maybe it’s because I’m mixed race. Or maybe they don’t like me because I’m outspoken. My mom was like, ‘You’re just too beautiful — they’re intimidated.’”

Celeste, who’s six feet tall, laughed. “I knew that wasn’t the answer I was looking for.”

In “Ideal Woman,” she’s processed those insecurities and accepted that tall, mixed race and outspoken “is just who I am, and I can live with that.” She’s trying to talk herself into being someone who doesn’t care, because caring is painful, she said.

Celeste Epiphany Waite, 26, is a thoughtful, unaffected British-Jamaican woman who has dazzled people with her singing since her first professional gig, at a basement bar 50 yards from the pier in Brighton, where she grew up. She sang Paul Weller’s “Wild Wood” and “Worried About You” by the Rolling Stones. “Not many people my age were listening to that music, but I just liked it,” she said during the conversation from London, gesturing often with her hands, smiling readily and averting her gaze when discussing some difficult details of her life.

Like a lot of 20 somethings, Celeste loves hip-hop, especially Tyler, the Creator, ASAP Rocky and Kendrick Lamar, whose 2016 album “Untitled Unmastered” served as a template for the kind of music she wanted to make, the sounds she’d imagined but couldn’t fully describe. But hip-hop isn’t evident anywhere on “Not Your Muse.” Like many people who are considered “old souls” when they’re young, Celeste loves music (and fashion) from previous generations. In addition to Billie Holiday, there are echoes of Nina Simone, Eartha Kitt and Amy Winehouse in her music, which can veer from “Stop This Flame,” a funky, jittering tale of romantic determination, to “Strange (Edit),” a showstopping ballad that lingers over romantic despondency.

Buzz around Celeste’s sound has been growing in the past few months. The TV host James Corden tweeted his praise (“I dare you not to love her”) and Elton John raved about her while adding two of her songs to his personal playlist on Apple Music. She won a few rising-artist awards in Britain, and made two sensational live TV appearances, including a showcase spot at the BRIT Awards. On Sunday, her rendition of the lullaby “Twinkle, Twinkle, Little Star” will appear in a Super Bowl ad for Inspiration4, an all-civilian charity space mission, and then released as a single. On Wednesday, her song “Hear My Voice” from “The Trial of the Chicago 7” was nominated for a Golden Globe.

When she released the dramatic, gospel-tinged “Little Runaway” as a single during the pandemic last summer, Jamie Hartman, a British songwriter and producer who is one of Celeste’s key collaborators, said her team thought the song would do for her what “Someone Like You” did for Adele. “That’s how big everybody thought ‘Little Runaway’ was as a song,” he said.

So imagine the surprise when “Little Runaway” didn’t crack the British singles chart. “We were all head-scratching at that point,” Hartman said. “There was a two- or three-month period when it all kind of went wobbly.”

Hartman said that Celeste’s British label considered releasing a six-song EP instead. Confidence in her talent eventually straightened out the wobbles. But the modest success of “Little Runaway” revived conversations about British soul music and race. “Especially from the U.K., we seem to export soul very well in a white format,” he said, mentioning Adele, Amy Winehouse, the Scottish singer Lewis Capaldi and Sam Smith.

This fact hasn’t escaped Celeste’s notice, either: “The origins of blues are work songs — literally Black people working on plantations as slaves,” she told The Guardian. “Why aren’t more Black women able to succeed or be visible in a genre that they’re at the origin of?”

For the last few years, the music industry has begun a tentative reckoning with its institutional sexism and, even more tentatively, racism. How Celeste reaches the market — and is embraced by audiences — raises the question of whether she’ll be a superstar like Adele or a more niche performer like Macy Gray. 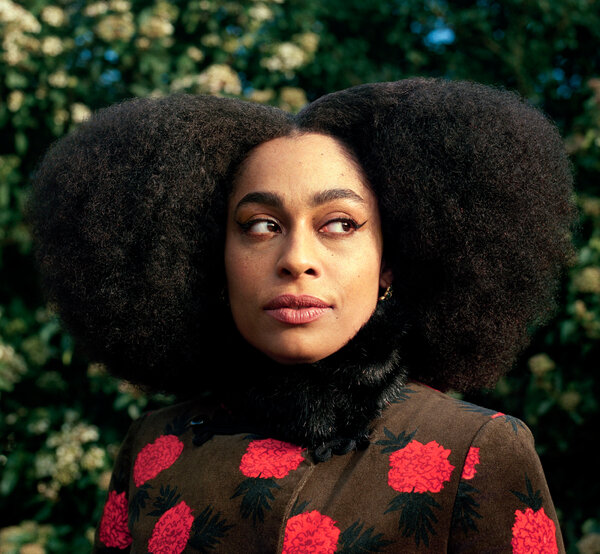 Celeste’s mother, a white Cockney British makeup artist, was working in Hollywood and “got caught up partying with her friends,” the singer said, when she met Celeste’s father, a Black Jamaican. Celeste’s mom became pregnant (“it wasn’t planned,” she said) but the relationship didn’t last. The couple broke up when Celeste was less than 2 years old, and she and her mom went back to England.

It was just the two of them for several years, until a boyfriend entered the picture, competing for her mother’s attention. “From the ages 10 to 13, I was really angry and had arguments every weekend with my mom and her boyfriend,” Celeste said.

As an only child, she was used to “living in my imagination and making my room my own world,” she added. Celeste’s mother and boyfriend had played disco and funk music in the house, but when her mom traveled for work, Celeste began spending more time with her grandparents and began listening only to soul and jazz. Her grandfather loved Etta James, so Celeste went to YouTube to hear more. Then she let the algorithm direct her into the past, especially the blues masters Howlin’ Wolf and Muddy Waters.

Older music, including records from the 1940s and 1950s, “just seemed really familiar with me,” she said. Celeste also loved her grandmother’s sense of style (“she likes a matching jacket and trousers”) and began borrowing those clothes and hunting for retro looks in local charity shops. “Even now, ’60s style is my favorite kind of style,” she said.

For her red carpet appearance at the BRIT Awards last February, Celeste wore a belted, collared, beaded, cream Gucci shirt dress, black lace gloves and black platform heels. With a kiss curl on her forehead, she looked like one of the Supremes, circa “Baby Love.” Celeste isn’t a showy singer — she relies more on slow pacing, a smoky, late-night timbre, and a rhythmic facility that often evades the downbeats — but that night, singing in a prime spot right after Billie Eilish performed, she added a few high notes to the last chorus. Eilish went maximal, with a full band and an orchestra; Celeste went minimalist, with just a pianist and her voice.

When asked about the “Not Your Muse” arrangement of “Strange,” Celeste provided a 13-and-a-half-minute answer that didn’t really address the question. Instead, it revealed how music, for her, isn’t about instrumentation, but about experiences, feelings and coincidences.

“There was a kind of potion that was coming together and brewing around the moments leading up to writing this song and the overall feeling of it,” Celeste began. She lives in London, but had been traveling to Los Angeles since late 2017 to collaborate with other songwriters. Her manager, Duncan Ellis, had picked her up from a recording studio on the west side of town and they were driving east toward Silver Lake. Looking out the window, she felt a sense of déjà vu.

“I saw this building emerge, and it was a hospital. My dad had lived in the U.S. and he passed away from cancer 10 years ago, when I was 16. That hospital was the last place I saw him,” she said, looking away from the camera at the desk in front of her.

When she saw the hospital, “it caught me very unexpected,” she continued. “My stomach dropped. I remember hiding from my manager and leaning out the car window, because I didn’t expect to feel that in just passing a building.” She felt, she added, that she was approaching “a sort of abyss.”

Other experiences went into the song, too. There were wildfires blazing across California that had destroyed the house of a friend’s mother, and she had attended the Camp Flog Gnaw music festival, where ash thickened the air. The next day, she said, “I could barely speak, because I’m sensitive to smoke. In my mind, I was like, ‘Oh my God, I’ve lost my voice. I’ve literally ruined my life.’ I was putting so much on singing that it just felt like the worst loss of all.”

The next day, she and Hartman were in the studio and he played her a few quiet chords that suggested unease. “I took a much quieter and softer approach,” she said. “That was informed by the chord progression, but also, I was trying to conceal the fact that my voice was weaker. I had such a clear and loud thought: ‘This is an important song. Take your time with it.’”

The finished arrangement was Hartman’s sparse piano chords played through a software plug-in that muted the trebly high end, Celeste’s voice and a string quartet arrangement, which she described as “quite off kilter and a bit sinister,” played by Sebastian Plano, an Argentine composer who lives in Berlin.

Other singers might have larded the song with synthesizers and punctuating drums, but Celeste knew to keep it simple. In pop music, most lead vocals are carefully tuned to eliminate any imperfections, but she wanted it to be “as untouched and virgin as it could possibly be,” so she left her voice scratchy and fragile.

Making music that sounds like it’s from another time has commercial risks. Radio likes new songs that sound like last month’s songs, but the biggest successes often come from artists who ignore the dominant trends and recreate them in their own image.

She accounts for the sound of “Strange” and “Not Your Muse,” by saying it “just comes from a bit of disdain toward the mainstream sound.” She explained, “I don’t want to abide by that, or feel like I have to go along with it to be heard.” In other words, don’t mistake her for somebody who cares.

‘30s star Elissa Landi left Hollywood for this reason, book reveals: ‘I wasted 7 good years of my life there’