Catherine Zeta-Jones celebrated her 22nd wedding anniversary to her husband Michael Douglas this year. That’s a lot of birthdays and holidays together, so Good Morning America‘s Robin Roberts decided that now was a good time to ask the Wednesday star which one in the A-list couple is a better gift-giver. Zeta-Jones had a very honest — and refreshing — answer.

“I think it has to be Michael,” she said under her breath. “I’ve been married 22 years. I peaked around year eight. If I’d known I would be married so long, I would’ve held back a bit. I wasn’t envisioning a 22-year-er. This is Hollywood, man! The 53-year-old actress had the TV anchors in stitches because she isn’t wrong — entertainment industry marriages don’t always have the longest life span.

So what did she buy Douglas in her peak year? A hot rod! “It looks like a little Bugsy Malone car,” she described the gift. “It was really great — and then I peaked.” She then quipped, “It’s been socks ever since.” LOL. We bet it’s a fancy pair of socks for the Oscar winner.

Douglas is an awesome gift-giver, according to his wife because “he’s good on the jewelry,” which is something she truly appreciates for its “sentimental value” (we also bet it’s pretty sparkly).  Maybe this on-camera confession will inspire Zeta-Jones to think of an epic present for her hubby this year. Perhaps that Bugsy Malone car needs a companion or two.

Before you go, click here to see the longest celebrity marriages. 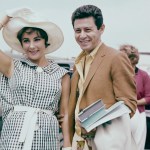 LOL! Harry Reacts to 2015 Video of Meghan Choosing Between Him and William
Recent Posts