Time was when just about every bouffant on Broadway could be traced back to Paul Huntley.

From “The Elephant Man” to “Chicago,” “Cats” to “Thoroughly Modern Millie,” Huntley was the designer behind the wigs and often-elaborate locks that helped define the lasting visual impression of some 300 projects, earning him a special Tony Award in 2003.

He also designed hair for about 60 films, styling the likes of Bette Davis, Jessica Lange and Vivien Leigh. He turned Glenn Close into Cruella de Vil for the 1996 live-action “101 Dalmatians” and Al Pacino into Phil Spector for the 2013 HBO biopic. He fashioned “Tootsie” twice, transforming Dustin Hoffman for the 1982 film and Santino Fontana for the 2019 Broadway musical adaptation.

The costume designer William Ivey Long has pronounced him “by far the premier hair designer on the planet hands down.”

Born in London to a working class family, Huntley grew up paging through his mother’s movie magazines. He attended acting school but ended up helping with the wigs instead.

Following two years of military service, he worked as an apprentice at Wig Creations, a large London theatrical company, where he helped construct Elizabeth Taylor’s bedazzling braids for “Cleopatra.”

The actress introduced him to the director Mike Nichols, who asked Huntley to do hair for his 1973 Broadway production of “Uncle Vanya.” He has been at it ever since. 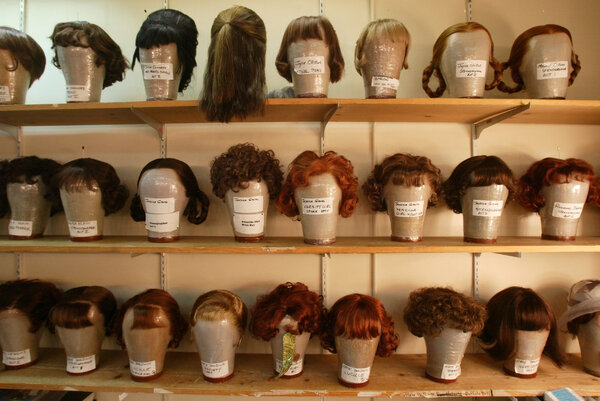 Much changed in the theater over the years. Rock musicals. Synthetic hair. Mic packs, which went inside wigs, forced them to be made more commodious.

Sporting a pinkie ring, wire-rimmed glasses and elegant black turtlenecks, Huntley remained a constant — known for his patience in dealing with divas and his ability to channel characters through his curls, waves and tresses.

He repeatedly rose to the challenge, creating 48 wigs for “Bullets Over Broadway” in 2014 and more than 60 human hair wigs and facial pieces the same year for the Shakespeare Theater Company’s two-part “Henry IV” in Washington.

But just as young Broadway ensemble players have been benched by Covid-19, so too has Huntley been out of work, which he said forced him to sell his Upper West Side home-studio townhouse.

Now, at 87, Huntley has decided to take a final bow. The Broadway musical “Diana,” which had begun previews before it was delayed by the pandemic, will be his last show. (It has been filmed for Netflix.)

In a telephone interview from his bed in New York — a condition in which he declined to be photographed — just before he was to board a flight to England, Huntley reflected on this bittersweet fork in the road.

You have threatened retirement before. After all these years, why leave Broadway now?

Looking back on your career, do you have favorites?

I preferred straight plays, like “Amadeus” — the white powdered wigs, which I always loved. I think you could be more subtle, which is what I tried to do in my career — make things as real as possible — whereas musicals, of course, it’s chorus girls and lots and lots of wigs.

Which of your musicals did you particularly enjoy?

One of my most favorite, of course, is “Cats,” which I adored because it was so very different from what I was used to doing. And I also loved “Evita” — I love that show very much. I just loved the look. And I love the music. It was Patti LuPone, who I work with a lot, who always requested me.

A lot of people requested me, you see, in their contracts. So that’s what happened.

“Diana” chronicles Lady Diana Spencer’s royal romance and marriage. How did you like working on a musical about a recent real-life figure?

It actually went very well. We had to make sure that we captured her in as short a time as possible, because it is, after all, a show. So she in fact has four wigs — when she started out, as a pudding face, she had a mousy look at the beginning and then gradually it got more flamboyant and windswept and windblown. And the color changed, of course, all the time. I was very fond of her and this was a tribute. I quite like the musical.

Why are you bedridden — what happened?

I was holding a “Diana” wig in my hand at home and slipped. I went backward, took a nasty fall down the stairs and fractured my pelvis, which meant I couldn’t walk. Now it’s just physiotherapy and exercise and wishing I was better.

Have you received your Covid-19 vaccinations yet?

I finished my shots yesterday. If you don’t guard against these things, as we can hear and see, the most terrible things have happened. There is no work for people and a lot of shows are not going to return.

When Broadway does resume, will you come back from London for the opening of “Diana”?

I will. The show had two preview performances. Then it all stopped.

Why did you have to sell your house?

I am struggling financially. It’s been very difficult. And the fact that I’m not well doesn’t please me.

You shared that house with your partner, Paul Plassan, who died in 1991?

Yes, we were together for 21 years. They called us the Two Pauls.

What is it like looking back on your long career?

I was always interested in new things, so one was very happy to do it. There were certain projects that, aesthetically. I may not have thought much of. But generally speaking, I enjoyed the rush.