Bob Fass, who for more than 50 years hosted an anarchic and influential radio show on New York’s countercultural FM station WBAI that mixed political conversation, avant-garde music, serendipitous encounters and outright agitation, died on Saturday in Monroe, N.C., where he lived in recent years. He was 87.

His close friends Sam and Walli Leff, who confirmed the death, said he had been hospitalized recently with Covid-19.

Mr. Fass called his long-running show “Radio Unnameable,” because its freewheeling format did not fit into conventional categories like Top 40 or serialized drama.

In a gravelly, avuncular baritone that was both soothingly intimate and insistently urgent, and that sometimes reflected the mellowing impact of the pot he smoked on the air, he might start out with a critique of segregation or the Vietnam War, then introduce a Greenwich Village friend named Abbie Hoffman to muse about a demonstration by the radical and theatrical Yippies that showered traders in the New York Stock Exchange with dollar bills.

Or he might bring on an ambitious Minnesotan named Bob Dylan, pretending to be an entrepreneur who manufactured clothing for folk singers. In various appearances, Mr. Dylan did comic monologues featuring characters with names like Elvis Bickel, Rumple Billy Burp and Frog Rugster, and asked cabbies to bring food to the station. In one appearance he tried out an unfinished composition, “Blowin’ in the Wind.”

“I’d put anyone on, because the idea was if you didn’t like what I was doing, three minutes later I’d be doing something else,” Mr. Fass once told an interviewer.

Mr. Fass was not the first freestyle disc jockey in the country, but he became the most prominent. He helped forge the identity of WBAI, a noncommercial, listener-sponsored station already known for his leftist stance, and paved the way for other popular WBAI hosts like Larry Josephson and Steve Post.

At times Mr. Fass, who helped found the Yippies, served as the instigator of what today might be called crowdsourcing. In February 1967, he urged listeners to flood the International Arrivals Building at John F. Kennedy International Airport for a “fly-in” to greet incoming travelers after midnight. About 3,000 people, many of them intoxicated both by marijuana and by the excitement of taking part in a seemingly pointless communal escapade, showed up.

Another time, he encouraged listeners to head to the East Village for a “sweep-in” to clean up several blocks of East Seventh Street that had been left filthy by a sanitation workers’ strike, pointing out that trash was being picked up on more affluent streets like Park Avenue. When the embarrassed Sanitation Department pre-empted the plan by cleaning up the street itself, Mr. Fass’s followers, armed with brooms and mops, moved down to an equally dirty East Third Street. 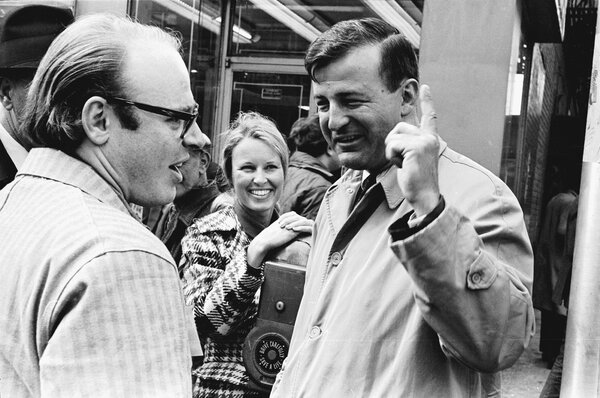 Such was the loyalty of his midnight-to-dawn listeners — overnight-shift workers, cabdrivers, insomniacs and hippies, among others — that he likened them to co-conspirators. His signature greeting was “Good morning, cabal.”

In 1971, in one of the most dramatic episodes of his career, a caller told Mr. Fass he was so despondent about having made a mess of his life that he had swallowed an overdose of pills. With thousands of listeners riveted by the live drama, Mr. Fass kept the caller talking while dispatching associates to contact the police. The telephone number was traced, and the caller was found unconscious but alive in an Upper East Side apartment.

Mr. Fass’s provocateur persona sometimes got him into trouble. In 1977 he was a leader of a unionizing effort at WBAI, exploiting his microphone to garner support against his employers, the Pacifica Foundation, and changes it had instituted in management and format. He even barricaded himself in the studio, which at the time was in a church at East 62nd Street, and continued broadcasting until executives called in the police. He was banned from the station for five years.

While other hosts got more mainstream jobs in public radio, Mr. Fass was determined to find another formless show, according to an account in the 2007 book “Something in the Air: Radio, Rock and the Revolution That Shaped a Generation,” by Marc Fisher. Having never earned more than $175 a week, he was forced to live off unemployment checks and the proceeds of fund-raising benefits. His obduracy alienated friends; Mr. Josephson, another WBAI host, said, “None of us were pure enough for him.”

He finally accepted an unpaid offer to do his show once a week on WFMU, a noncommercial New Jersey station. The station let him retain his “Radio Unnameable” format, but it did not have the New York City audience he craved. He was miserable until WBAI took him back in 1982, although the station no longer granted him five nights a week, and in 2006 his airtime was reduced to once a week.

In 2018, Mr. Fass suffered a fiasco not unlike those he used to hear about from distressed late-night callers. While he was moving his belongings from his home in Staten Island to a house in Danbury, Conn., he flicked on a malfunctioning gas fireplace and set off a two-alarm blaze. Mr. Fass, who was using a wheelchair, had to be carried out by the movers but inhaled a good deal of smoke. Scores of tapes of shows that he had held onto after the Columbia sale were damaged.

“I could have been roast D.J.,” he told a reporter.

The move to Connecticut ultimately fell through, and Mr. Fass and Lynnie Tofte, his second wife, and only immediate survivor, moved to North Carolina. (His first marriage, to Bridget Potter, a former vice president for programming at HBO, ended in divorce.), He continued to do a weekly three-hour midnight show from there until recently.

Unlike Jean Shepherd, another free-form pioneer, Mr. Fass rarely mined his childhood for on-air material, so listeners did not know much about his origins. He was born on June 29, 1933, to Jack and Nancy Fass, children of Jewish immigrants — his grandmother knew Emma Goldman — and was raised in Brooklyn. His father was an accountant.

A shy, socially uneasy boy, he was drawn to acting, and after graduating from Syracuse University he studied with Sanford Meisner and Sydney Pollack at the Neighborhood Playhouse and took workshops with Stella Adler. He had small roles in productions of Brendan Behan’s “The Hostage” and “The Execution of Private Slovik.” After an Army tour in the mid-1950s, he appeared in the original Off Broadway production of “The Threepenny Opera,” with a cast that included Lotte Lenya.

It was during the empty hours at an Army base in North Carolina that he became an obsessive radio listener, tuning in on a transistor radio while lying in his bunk. In 1963, a high school friend, the poet Richard Elman, helped him get a job as an announcer at a WBAI. He was given a midnight slot that had been largely unfilled until then.

Mr. Fass, according to Marc Fisher’s account, molded his program to the contours of a show on KPFA, the Pacifica Foundation’s flagship station in Berkeley, Calif., that was a mix of jazz, political commentary and comic sketches, but he put his own spin on it. In one of the highlights of his show’s long run, Abbie Hoffman, one of eight antiwar activists (known as the Chicago Eight and, after Bobby Seale of the Black Panthers was removed from the case, the Chicago Seven) who had been charged with inciting to riot during the 1968 Democratic National Convention in Chicago, called in updates of their trial.

Word spread of his openness to offbeat entertainment. The show attracted an eccentric falsetto-voiced singer named Tiny Tim and musicians like Richie Havens, Joni Mitchell, Muddy Waters, Frank Zappa and Ramblin’ Jack Elliott, some of whom were just starting out. Arlo Guthrie tried out several versions of “Alice’s Restaurant,” and Mr. Fass played Jerry Jeff Walker’s song “Mr. Bojangles,” about a street dancer in New Orleans, so frequently that it led Atco Records to sign Mr. Walker to a contract.

Mr. Fass gave airtime to poets like Allen Ginsberg and Gregory Corso and staged a recitation of “Waiting for Godot.” He once brought in people he identified as representatives of Stamp Out Smut, an organization opposed to the performances of Lenny Bruce, and then, underscoring his own political slant, followed up with a recording of a Bruce monologue.

One of Mr. Fass’s steady listeners was said to be a young Howard Stern, who would go on to create a free-form radio show of his own, expanding Mr. Fass’s legacy into future generations.

A documentary about Mr. Fass by Paul Lovelace and Jessica Wolfson, also called “Radio Unnameable,” was released in 2012.

“Radio Unnameable” was such a chronicle of the counterculture that Columbia University purchased 10,000 hours of deteriorating tape recordings of the program from Mr. Fass and began digitizing them. The recordings included his running account of the 1968 occupation of Columbia buildings by students protesting the construction of a university gymnasium.

“We have taken on a major audio archive of an outsider figure who was positioned uniquely at a critical moment in American history,” Sean M. Quimby, the director of Columbia’s Rare Book & Manuscript Library, said in 2016. “At the end of the day, this is a huge corpus of data that will used by historians.”

Weezer Team Up With IRobot For Custom-Skinned Roomba
Recent Posts