Bachelor in Paradise star John Paul Jones made himself the center of attention at Chris Randone and Krystal Nielson’s wedding, but now he is apologizing for stealing the spotlight from the newlyweds.

“After watching this past Tuesday’s [episode] of BiP and having had time to step away from it all and introspect on my actions, I do deeply regret that my behavior was disruptive and upsetting to the celebration of Chris and Krystal’s wedding reception,” the 24-year-old wrote on Instagram on Monday, September 2.

John Paul blamed his behavior on “the fatigue and anxiety I felt at the time” before acknowledging that he “should have used good judgment in my decisions and acted in a more mature and selfless way.”

In the comments section, the financial analyst’s castmate Derek Peth slammed him for issuing a public apology rather than privately contacting Chris and Krystal, both 31.

“Don’t insult our intelligence…you could reach out on your own instead of on Instagram,” the commercial banker, 31, wrote. “This is just an attempt to save face.” 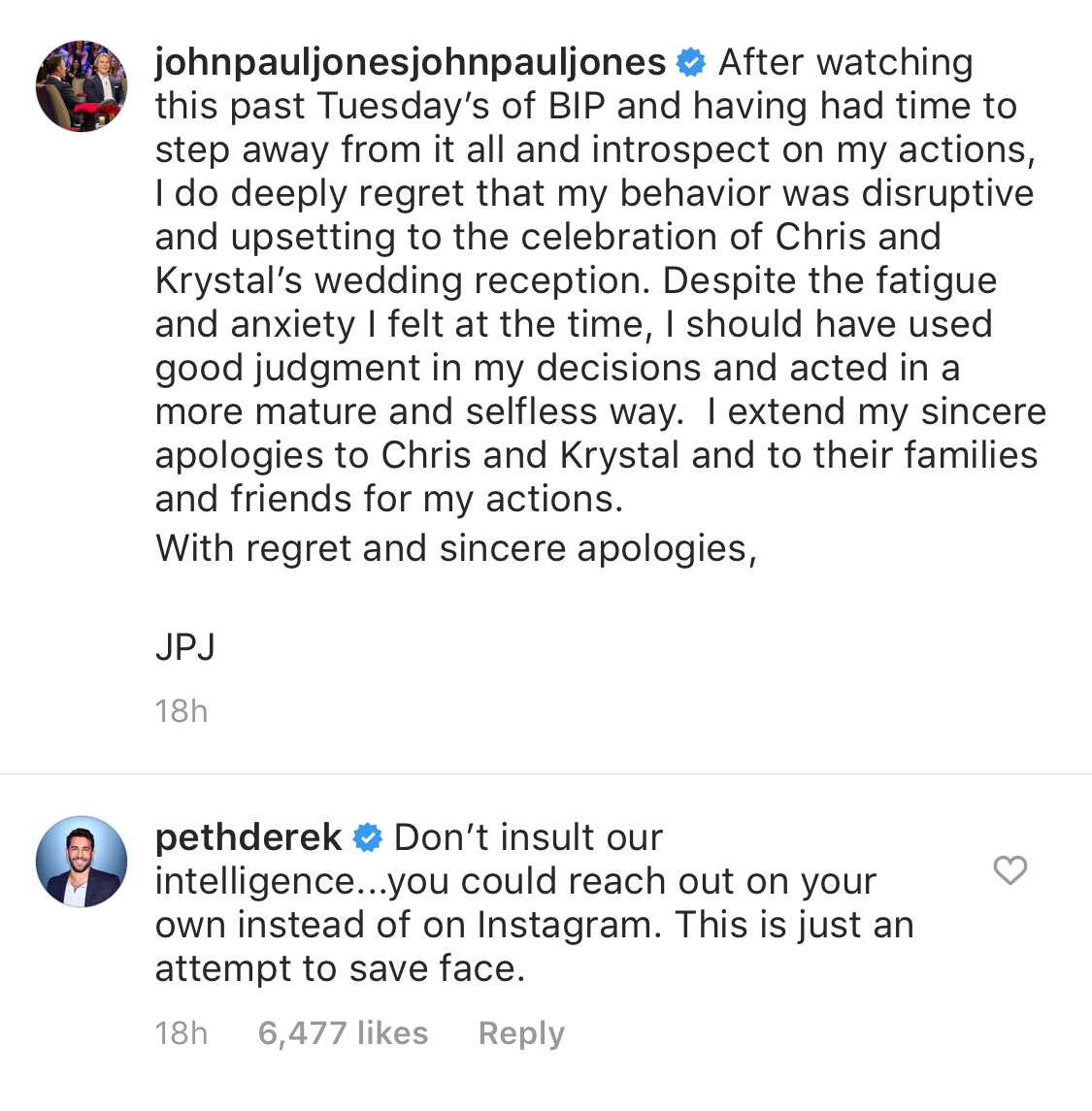 Other Paradise cast members, however, applauded John Paul’s post. Sydney Lotuaco commented, “Thatta boy,” Katie Morton wrote, “You’ve got a good heart my friend !” and Chris Bukowski called JPJ “a gentleman.” Dean Unglert, meanwhile, joked, “I wish you would yell at me like that. with the lights off.”

While attending Chris and Krystal’s wedding reception on the August 27 episode of the ABC reality dating series, John Paul confronted Derek as they fought for Tayshia Adams’ affection. JPJ accused Derek of taking “advantage of [his fans] sexually” and going on TV to promote his podcast, which the latter denied.

Things came to a head between John Paul and Derek on Monday’s episode, which included a screaming match and ended with Derek abruptly leaving the show.

Bachelor in Paradise airs on ABC Mondays and Tuesdays at 8 p.m. ET.

For the latest TV news and interviews, subscribe to our new podcast “Watch With Us” below!