Barbara Hunt McLanahan, who as the leader of a series of arts organizations championed diversity, out-of-the-mainstream work and alternative paths for artists to sell and display their efforts, died on Tuesday in Manhattan. She was 55.

Her husband, Michael McLanahan, said the cause was pancreatic cancer.

At her death Ms. Hunt McLanahan was executive director of the Children’s Museum of the Arts in Manhattan, where she oversaw programs that both introduced children to art and artists and encouraged them to try their own art-making.

But that was just the latest stop in a career that included leading Visual AIDS, an organization that uses art to encourage dialogue about AIDS and supports H.I.V.-positive artists, and the nonprofit Manhattan gallery and arts organization Artists Space. She also curated exhibitions and served on the boards of arts organizations, including the Camargo Foundation, a residential center in France devoted to the arts and humanities.

“Barbara was intuitive in seeing people’s potential and stood firmly behind those she trusted,” said Christopher Apgar, who served with her on the Camargo board.

Ms. Hunt McLanahan had been chairwoman of that board for the past two years, stepping aside only weeks ago because of her illness. Calogero Salvo, a filmmaker who succeeded her in that post, also served with her on the board of a sister organization, the Jerome Foundation.

“Both organizations and the artists they serve gained so much from Barbara’s intuition and the way she could convey ideas into action in a professional, eloquent and fresh approach,” Mr. Salvo said by email.

At the Children’s Museum, colleagues remembered Ms. Hunt McLanahan’s commitment to introducing all types of youngsters to art.

“Barbara consistently fought for equal access to arts education,” the museum’s board said in a statement, “particularly for children from underserved communities, such as those in foster care, on the autism spectrum, those living in transitional housing, and children with disabilities.”

A memorial fund established in her name will benefit Arts for All, an initiative for children with disabilities.

Barbara Lee Hunt was born on April 11, 1964, in Germany and grew up in England. Her father, Keith, was a technical writer, and her mother, Yoke Lin Hunt, worked at the British company Martin-Baker Aircraft.

“I’m actually half Chinese, and my husband’s Jewish,” Ms. Hunt McLanahan said in an interview with the guide New York Family for its 2015 series “Moms We Love,” which spotlighted her work with the Children’s Museum, “so diversity and making sure that we represent is really important to me.” 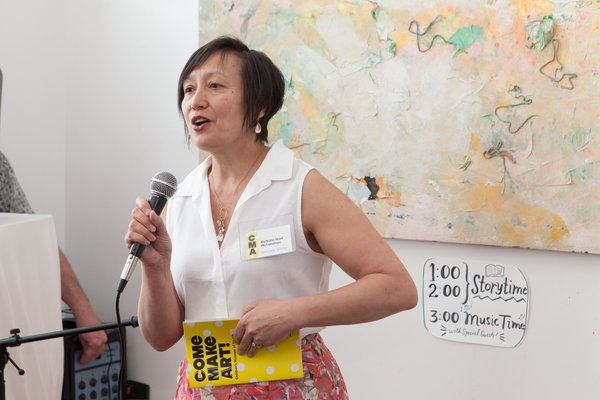 Ms. Hunt McLanahan grew up in eastern England and did not have much exposure to art until she was 15, when her class took a field trip to the Tate Britain museum in London and she encountered a roomful of Mark Rothko, the Abstract Expressionist.

“It was the equivalent of a spiritual experience,” she told New York Family. “We sat in this room and were looking at these paintings and just feeling so elated. I was like, ‘This is it — I’ve found it.’ ”

She earned a bachelor’s degree in visual and performed arts at the University of Kent and a postgraduate diploma in gallery and museum studies at the University of Manchester. She worked at the Camerawork Gallery & Darkroom in London from 1992 to 1996, and her interests began to take shape.

Kim Yasuda, an artist and professor at the University of California, Santa Barbara, said that at Camerawork, Ms. Hunt McLanahan gave her her first show outside the United States.

“In the early ’90s, Barbara was tackling complex issues around identity and representation in contemporary art,” she said by email. “She provided significant solo exhibition platforms for many underrepresented and emerging artists.”

In England Ms. Hunt McLanahan also served on various boards, including that of the African and Asian Visual Artists Archive. She moved to New York in 1996, and in 1997 was hired as executive director of Visual AIDS, a post she held until 2000. Among her legacies there is “Postcards From the Edge,” a fund-raiser she started in 1998 that features postcard-size works by established and emerging artists that are sold anonymously at a low cost.

“Postcards” continues today. Amy Sadao, who would later herself be executive director of Visual AIDS and is now director of the Institute of Contemporary Art in Philadelphia, said in a phone interview that the fund-raiser was just one example of the ways Ms. Hunt McLanahan “democratized the art world,” breaking down the barriers that tend to make art elitist.

In addition to being an administrator, Ms. Hunt McLanahan continued to curate. One notable example was “Bodies of Resistance,” a show she curated for Visual AIDS that, after its debut in Hartford in 1999, traveled to Durban, South Africa, the next year during an international conference there on AIDS.

In 2000 Ms. Hunt McLanahan became director of Artists Space in Manhattan, and in 2006 she moved to the Judd Foundation, devoted to the legacy of the artist Donald Judd, who died in 1994.

She continued to be a behind-the-scenes force in the art world in numerous ways beyond her day job.

“She was always keen to bring people together,” Antoine Vigne, an arts writer and longtime friend, said by email. “Be it in Venice or London or Paris, there were always contacts she would share, and ideas that would create links between institutions.”

Ms. Hunt McLanahan’s first marriage, to Gregory Greene, ended in divorce. In addition to her husband, whom she married in 2004, she is survived by a brother, Andy, and a daughter, Jade.

If Ms. Hunt McLanahan was adept at furthering the careers of emerging artists of all sorts, she found a different sort of reward as executive director of the Children’s Museum of the Arts, a job she had held since 2013.

“For me,” she told the website Artsy in 2016, “there are highlights every day when I see children aged 1 to 15 fully engaged in looking at and being inspired by contemporary art, then going to our three studios to make something for themselves with confidence and purpose.”