In a photograph taken by her father in 1986, a 9-year-old Leslie Hewitt stands with her little brother before a chain-link fence outside of their home in Queens. Snug in a red hat and a blue winter jacket, she leans with one outstretched hand on a giant snowball, the other arm akimbo. Hewitt recalls that she was not only a subject of the picture but also an active collaborator in its creation (she rolled the enormous snowball; she asked her father to take the photo) and there is a way to read the image as the beginning of the artist’s preoccupation with the intersection of sculpture and photography. Hewitt has been consistently exploring that boundary since 2002, when she began her ongoing photographic series “Riffs on Real Time,” in which she layers family photographs, both found and her own, on top of various surfaces, such as printed matter (books, magazines, papers, manila envelopes, letters), hardwood floors and blue shag carpet, creating arrangements that both evoke and unsettle traditions of 17th-century Dutch still-life paintings.

[Sign up here for the T List newsletter, a weekly roundup of what T Magazine editors are noticing and coveting now.] 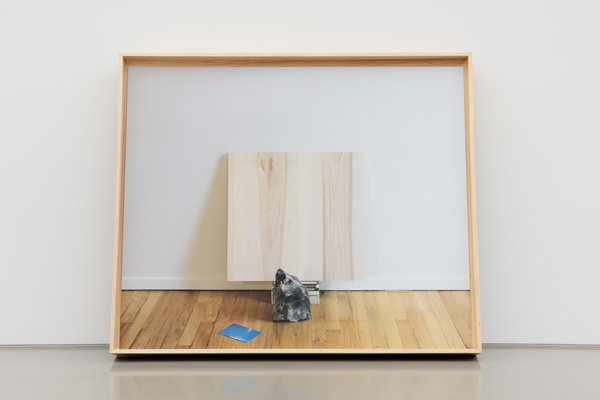 “Reading Room,” her latest solo exhibition, opens today at Perrotin gallery on the Lower East Side. There, she presents five new industrially produced steel sculptures — metal sheets cut to the dimensions of the gallery’s doors and windows and folded at various 90-degree angles — and several custom-framed digital prints that lean against the wall. The photographs — which depict thoughtful compositions of wood panels, pieces of onyx and obsidian, a conch shell, other photographs and strategically placed books — further engage with her abiding interests in history, memory and archives. In addition to her exhibition in the first-floor gallery, Hewitt has also repurposed Perrotin’s bookstore, where she brings together “Forty Two” (2019), a text-based computer-programmed work inspired by concrete poetry, and one photograph from “Riffs on Real Time (2 of 10)” (2012-2017), which shows Lewis Michaux, the owner of the midcentury Harlem landmark the National Memorial African Bookstore, surrounded by overflowing bookshelves and mountains of stacked literature. “I’m looking at the edge first, what didn’t make the frame and what signifies the limits of photography,” she says of her approach to attending to images. “I can’t enter into the bookstore; it closed before I was born. I can only look at it, and if I look slowly, I begin to read the image,” she adds, emphasizing how she asks her audience to do the same, “not to just look but to read.” Hewitt’s work is propelled by such complexities of interpretation. She offers photographs as reading material, computer programming as language, text as visual representation, and her photo-sculptures are always unstable — always exposing the frame, they suggest an antidote to our screen-heavy digital economy, in which images are so often consumed and shared without care.

On days when she’s not teaching at Cooper Union’s School of Art, Hewitt works from her two-room studio in Harlem, located on a serene street in Strivers’ Row a few blocks away from the Schomburg Center for Research in Black Culture. In the front room, she makes her work, shooting in natural light. In the back room, she reads and organizes her ideas, pinning papers on the wall. There, flanked by bookshelves and the building’s original early-20th-century fireplace, Hewitt answered T’s artist’s questionnaire.

What is your day like? How much do you sleep, and what’s your work schedule?

I have trouble sleeping. Not in a bad way — there’s just so much to read and absorb, especially when studio is primary for me. When I’m teaching, I’m a little bit more regimented, because it’s not just energy that you need for yourself, it’s energy that you need to share. But I love the open studio space where everything blurs, so there aren’t clear lines between what I’m reading for pleasure, what I’m reading to teach myself something, what films I’m watching. All of these lines blur and bend as if awakening from a dream. I enjoy this lack of clarity in time and space, but it’s not sustainable.

How many hours of creative work do you think you do in a day?

What’s the first piece of art you ever made?

I made it with my brother when I was maybe 9 and he was 5. I grew up in Saint Albans, Queens, and it had snowed, and we had a long side yard, and I had this idea that if we rolled snow, it would collect more snow and we could turn it into this big thing. And we did it. I then asked my dad to come take a picture of it and us.

What’s the worst studio you ever had?

I don’t think that’s possible. I feel like part of being an artist is problem-solving. You should be able to figure out what you need.

How do you know when you’re done a piece?

I am interested in multiplicity as a form, and I work with seriality, so in essence there’s always more. But in order to have perspective and not get stuck in a myopic scenario, that’s where you have artist friends who help you, who know you and see you from a distance when you need it.

What music do you play when you’re making art?

When did you first feel comfortable saying you’re a professional artist?

I don’t know what constitutes an artist versus a professional artist. The term “artist” is dialogical; it’s something that other people also have a way of calling you. It’s not just self-proclaimed. It’s like giving yourself a nickname: If no one uses it, it doesn’t quite work. It has to be a collective agreement. I always share with my students that if we think that art can only exist in capitalism (which is my association with the adjective “professional”), we have limited what that term means, because art has existed alongside human existence.

Is there a meal you eat on repeat when you’re working?

This sounds horrible, but I normally don’t eat until the end of the day while working. This is exposing my really poor eating habits with only having water and coffee most of the day, but then for dinner I am enriched by Senegalese thiebou djeun.

Are you bingeing on any shows right now?

What’s the last thing that made you cry?

That’s so easy. Toni Morrison’s death. Of course her work lives on in the most palpable, powerful way, but it was a reminder of her humanity, which means that it has a limit. Her passing is amplified by the fact that we’re in a really intense moment. The current president’s rhetorical style is so reductive, and it’s interesting that even in this wave of mass shootings, everyone all of a sudden is saying “white supremacy” like every fourth word in the press — you’re like, wait, what world am I in? — and then she dies and the scales are recalibrated because there’s such depth to her. Even though it was sad that we lost her, it was also a reminder of this wealth of words that she’s given us to confront something like this — and in the most epic, thoughtful, graceful, clarifying and precise way.

If you have windows, what do they look out on?

A tree on Strivers’ Row. One of the reasons I love this studio, and this region of Harlem, is that it’s so quiet. In the summer, this tree grows really big, providing some privacy, but I can still see people. It was touching the window and I was getting all these ants, so I had to call the city to come and prune it.

What do you bulk buy with most frequency?

It’s strange to take this on, but when other people embarrass themselves, that embarrasses me too. And that’s embarrassing.

What are you reading?

The haptic, embodiment and how we process memory are becoming more and more important to me. I like reading two different forms of asking the same thing, so right now it’s “Touch” by Adania Shibli and “Parables for the Virtual: Movement, Affect, Sensation” by Brian Massumi.

What’s your favorite artwork by someone else?

Joan Miró’s “Photo: This Is the Color of My Dreams” is the most beautiful. Also, Sherrie Levine’s “After Walker Evans,” “Untitled (A Portrait) 1991” by Felix Gonzalez-Torres and “Phat Free” by David Hammons. Finally, I guess you could call it an artwork, but it’s truly a study of the mind: “Playing in the Dark” by Toni Morrison.

This interview has been edited and condensed.

I was drugged and robbed by a real-life ‘Hustlers’ thief