In the mid-20th century, a steady stream of American jazz musicians flew the coop to Europe, ditching the restrictions and prejudices of their home country for a continent where earning a decent living as an artist seemed more possible.

For the renowned trumpeter and multi-instrumentalist Don Cherry — who settled in Sweden at the end of the 1960s after spending years in New York as one of the leading figures in avant-garde jazz — life in Europe offered more than that, too. It was where he began sharing an artistic practice with the fashion designer and textile artist Moki Karlsson (later Moki Cherry), whose career would become intertwined with his. It was a launchpad to other places, too: Turkey, Morocco and countries farther south, all with their own artistic traditions to uncover.

Europe was also a place from which Moki and Don — given just enough public support, and surrounded by a community of like-minded artists — could lead experiments into what they called “organic music.” For roughly 10 years starting in the late 1960s, living mostly in an abandoned schoolhouse they had bought in the southern Swedish town Tagarp, the couple taught classes, held concerts, hosted friends and collaborators from across the globe and made work. 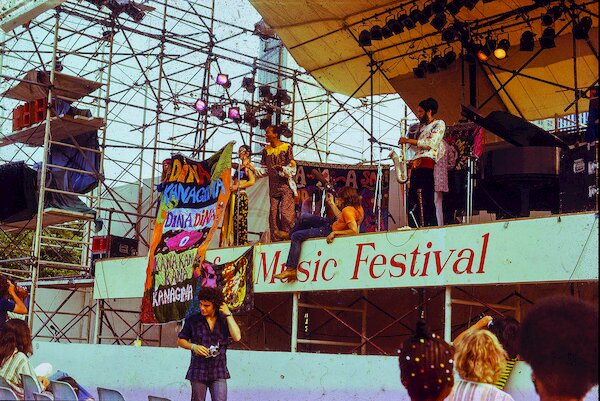 The Cherrys’ collaborative project during these years is the focus of an impressive, multipart celebration by Blank Forms, a Brooklyn arts organization, whose small staff spent years piecing together the hitherto-uncollected strands of Moki and Don Cherry’s lives together, as well as those of their now-famous musician children: Eagle-Eye Cherry and Neneh Cherry. (Don Cherry died in 1995, and Moki in 2009.)

What Blank Forms has generated — a gallery show dedicated mostly to Moki’s artwork, a 500-page book and two archival albums featuring Don’s performances from that era — shows how richly the musician had come alive during this period, which is often misunderstood as a footnote to his more well-documented time on the New York scene but was arguably when he made his most thoroughly developed work. And it elevates the long-overlooked art of Moki Cherry, who has never been fully seen for the distinctive creator that she was. (Her work will be the subject of a separate show in Chicago later this year, at the Corbett vs. Dempsey gallery.)

The centerpiece of Blank Forms’ project is the book, “Organic Music Societies,” available on Friday, which collects oral and visual history as well as critical writing and lustrous photographs of the couple’s milieu in Tagarp. A series of photos shows the interior of their home, with Moki’s plush, wavy tapestries filling nearly every corner, many of them emblazoned with religious mantras.

A few of those tapestries are on display, now through June, along with paintings and drawings by both Moki and Don, at Blank Forms’ small gallery in central Brooklyn. One of her tapestries hangs nearly from floor to ceiling, the words “Organic Music” stitched in an arc over two outstretched hands, a heart and a pair of wings.

By the time she made this piece, Don had started to turn his musical practice into pedagogy, with a series of master classes for adults that he began leading in 1968 at ABF House, an education center run by the Swedish labor movement, where he brought together folk musicians from around the world and asked them to teach their traditions. Experts of Turkish drumming, Scottish bagpipes and Indian vocal technique all gave lectures, and engaged in group performances.

In a 1968 interview with the writer Keith Knox, reprinted in the “Organic Music Societies” book, Don Cherry clarifies his intentions. “The first and most important thing is the sensitivity of sound,” he said, explaining that he told students to listen for “ghost sounds,” or the unexpected resonances and rhythms that might pop up in the process of making music.

“We find in these studies that we can really develop within ourselves by contradicting what we have been taught, to get to our inner expression, which the forms of the Western system do not do,” he added.

In his introduction to the book, Lawrence Kumpf, Blank Forms’ artistic director, writes that Moki and Don Cherry’s projects together “took Don’s music out of exploitative and commercially driven jazz circuits and integrated it into a total art and life project that broke away from convention.”

Though Don Cherry professed to abhor politics, there is an element of radicalism here — in what it is rejecting, as much as what it is doing. Naima Karlsson, the Cherrys’ granddaughter, who worked with Kumpf to assemble the book and exhibition, said that Moki and Don had approached activism through the lens of religion, much as John and Alice Coltrane had, and by gathering people together. “In Buddhism, you can make huge changes by helping other people — by making a change in other people lives,” she said in an interview. “They really thought that in their creative and artistic life, by creating, through their artistic collaborations, they could reach people on another level.”

This isn’t how Don Cherry is generally remembered. Born in Oklahoma to a Black father and a Choctaw mother, Cherry became famous as a member of the free-improvising Ornette Coleman Quartet that turned New York City upside-down in 1959 with the release of “The Shape of Jazz to Come” and its subsequent 10-week run at the Five Spot Café. For Coleman, Cherry was part foil and part fraternal twin: A harmonically minded improviser in a group that had left chord structures behind, the trumpeter alternated serenely between hurried-up phrases and long, patient tones. A tad less evasive than Coleman’s, his playing — on the tinny-sounding pocket trumpet, Cherry’s signature — was just as playful.

You can draw a line in one direction from that work to “Cherry Jam,” an EP from an unearthed 1965 radio broadcast in Denmark that was released earlier this year on Gearbox Records. It shows him swinging through a set of tunes with a local rhythm section, leading his bandmates constantly into crooked surprises, all within the context of mainstream jazz.

But he was also moving the other way. On his world travels in the mid-1960s — first to Europe as a member of Sonny Rollins’s group and then to Turkey and Morocco, where he spent time with the Master Musicians of Joujouka — Cherry began to understand how the liberated artistic language he had been working out alongside Coleman could be used to unlock affinities between all kinds of music. He started playing more percussion and piano, and singing more.

This phase was just starting to flower when he recorded the first of two albums that Blank Forms will release in June. “The Summer House Sessions” was made on an island outside Stockholm in 1968, when Cherry was leading classes at the ABF facility. The music here is an outgrowth of those sessions, blending musicians from Sweden, Turkey, France and the United States. With two saxophonists, two bassists and three drummers, the group is really a combination of separate bands Cherry had been leading in New York and Sweden.

The horn players all trade themes and motifs in a star burst of high-velocity improvising, sometimes coming together into cohesive, beboppish lines, like an ornate assemblage being thrown together on the roof of a fast-moving car.

The other album, “Organic Music Theater,” captures the first performance that Don and Moki led under that name, in 1972. Years earlier the couple had begun presenting interdisciplinary shows using the name Movement Incorporated, with Moki’s tapestries ensconcing a diverse cast of musicians, dancers and puppetry performers (Moki also played the tanpura, a droning Indian string instrument). Later in 1972, they would record “Organic Music Society,” an underappreciated gem of Don Cherry’s recorded career, turning global folk musics into a kind of unified popular language of its own.

On “Organic Music Theater,” leading a five-piece band that also includes the Brazilian percussionist Nana Vasconcelos, Don mixes time signatures and scales from Turkey, South Asia and parts of Africa. As he leads the group in singing a ballad (“Butterfly Friend”), then draws it into a chattering chorus of falsetto cries (“Elixir”), it’s impossible to tell which voices are coming from onstage and which are in the audience. Everyone, it seems, is singing — and everyone’s listening.

‘Rockfield: The Studio On The Farm’ To Feature Members Of Black Sabbath, Oasis & More
Recent Posts