Ensconced in the Museum of Modern Art’s big atrium, Amanda Williams’s “Embodied Sensations” is a richly reverberant installation piece. You can take it as sculpture, institutional critique and social commentary on public space and its inequitable accessibility — and that’s only the beginning. Like a stone tossed in still water, this piece sends ripples in all directions.

Williams, a visual artist from Chicago, took part in MoMA’s recent “Reconstructions: Architecture and Blackness in America,” contributing a meditation on freedom and freedom of movement inspired by Kinloch, Missouri’s first all-Black town (founded in 1890). Her strategy in the atrium was simple. Because of social distancing rules, the museum had cleared its lobby of nearly all of its black modernist furniture — by MoMA-approved designers like Jean Prouvé, Charlotte Perriand and Harry Bertoia. Williams had these chairs, sofas and benches stacked on view in the museum’s atrium in two oblong piles. The hoard of furniture mirror the masses of art that the museum owns, of which only a small portion is used. Like MoMA’s stored art, the piles render the seating useless. Its social purpose — for comfort, comity, study, eating — is constricted. 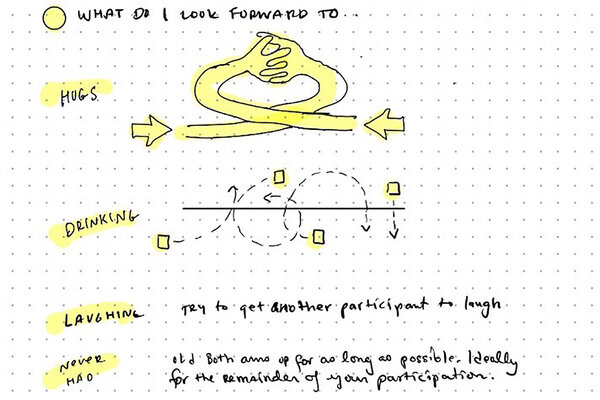 The second part of the atrium presentation is a series of slides projected on the wall that takes constriction into the social sphere. We see pages from executive orders regarding Covid-19, Georgia’s recent voting rights bill, a Louisiana state literacy test and a court case about illegal voting. Also projected are sketches of show figures, a floor plan of the lobby, and instructions for mini-performances for visitors devised by Williams and the choreographer Anna Martine Whitehead. For example, try humming your favorite song while walking backward around the piece or applauding something or someone for 60 seconds. In other words, make freer use of MoMA’s space, make it more a part of life, which is what Williams’s ambitious work is doing too.

Other pages query visitors, asking in one case what they do when their “presence in a public space is questioned.” That one illuminated the kinds of blackness that have always been acceptable at MoMA — in modern design and art. The Blackness of artists and visitors? Until recently, at least, not so much.

Matthew Wong began making colorful, compulsive paintings around 2016, and they got attention quickly — they were gorgeous. By 2019, when he killed himself at the age of 35, he was already planning his second New York solo show. (He had struggled with depression, and other conditions, since childhood.) For years before taking up color, Wong had been making a large ink drawing most mornings before breakfast. And apart from one piece, briefly exhibited in Hong Kong, the drawings now hanging at Cheim & Read are the first that have ever been shown.

Raised between Toronto and Hong Kong, Wong was as interested in classical Chinese painting as in the modern Western kind. He even mounted some of his drawings on silk. But while the ink in a classical Chinese landscape is always flirting with translucency, Wong’s is more like oil paint — dense, reflective, resistant. The drawings are like the later paintings in other ways, too. The same marble-like little sun appears frequently, gleaming over strange landscapes in which solitary figures may be hidden. In many drawings you will also see Wong’s need to fill every available space, although working in ink did force him to leave at least a little room around his brush marks.

But sometimes black and white achieve a breathtaking balance. Half a dozen narrow birch trunks lean against a wall of black leaves in one piece. Above them a sun peers down from a narrow strip of sky; below lies a curving path under heavy snow. A few pointed black leaves, scattered across the snow like footprints, are the only evidence of life. (This piece and the show are both called “Footprints in the Wind.”) Throughout the show, Wong shows you how many tones can be wrung from black ink, but here he pulls off a similar trick with white paper. As the sky, it’s bleak and wispy; as snow, lustrous and rich.

Cameron Rowland is the rare artist who’s received much attention for making conceptually difficult work. In his 2016 breakout show at Artists Space, he presented seemingly innocuous objects made by people incarcerated in New York state prisons and purchased by the nonprofit gallery; his accompanying pamphlet traced a line from slavery to contemporary prison labor. This is Rowland’s model: a spare aesthetic focused on everyday items, accompanied by research into their roots in racial capitalism and sometimes, interventions into the system that upholds whiteness.

His new show, “Deputies,” continues in the same vein, explaining in a 16-page booklet how the protection of white people’s property served as the foundation of American policing. The objects that occupy the gallery, all arranged on its perimeter, tell a story that’s evident even without the booklet: A custom-made emergency-call tower is an echo of the mounted and stacked scanners and recording device that Rowland has programmed to capture police radio communications, many of which relate to vague suspects. The descriptions reverberate across the space, and centuries, to a framed page from an 1803 newspaper that contains an ad offering $10 for the return of a “Negro man,” while two refigured cotton scales hang on an adjacent wall, eerily reminiscent of shotguns.

The artist has also covertly placed five benches in nearby Seward Park to honor unmarked Black burial grounds throughout the city.

Rowland’s work can be intimidating because it’s simultaneously enigmatic, didactic and demanding. If you spend time with it, though, his argument unfolds clearly: The infrastructure that many people take for granted was built out of slavery and racism. That won’t be news to everyone, but there’s still something meaningful about sitting on an unauthorized park bench and considering how it shapes the world around you.