26 Actresses Over 50 Who Are More Successful Now Than Ever

Hollywood is sexist. There, I said it. Male actors have long been held to a different standard than actresses; furthermore, stories about men of all ages have long been told, while stories about women that go beyond their (adolescent, if possible) romantic entanglements have long been placed on the back burner. The result? Absurd casting decisions like having Nicole Kidman play the mom of 12-years-her-junior Jason Momoa in Aquaman, and an ever-growing group of actresses over 50 who are bursting with talent and don’t have the opportunities they deserve available to them. In the past few years, though, we’ve seen some of these women taking back the reins, launching production companies or transitioning into directing and teaming up with other women in the industry. Now, there are more actresses than ever who are over 50 and at the absolute top of their game, from Jennifer Lopez to Robin Wright, Laura Dern, Kelly Ripa, and so many more. 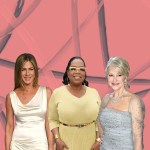 
These Celebrities Have All Opened Up About Not Having Kids

In fact, when we think about the biggest leading lady stars today, it feels like most of our heavy hitters are in the 50-and-over club — which, by the way, makes perfect sense. After decades honing their craft in the industry, why wouldn’t they be more talented than ever before, more confident and more attuned to the camera? Why on earth have we been sidelining these women who not only have the lived experience to tell more complex stories, but the wherewithal to handle the pressures of such media attention?

The truth is, those in power in film and TV are only now beginning to recognize the immense star power these actresses hold — and that’s important news for every viewer, actor, or producer out there. These actresses are living proof that age ain’t nothing but a number and talent rises to the top, so read on for our favorite stars over 50 who are taking back the industry.

Here’s How You Can Watch The 2021 Grammy Awards