There isn’t much that Gal Gadot’s Wonder Woman can’t do with her golden Lasso of Truth, that shimmering, computer-generated rope that sends villains to their doom and rescues children from precipice edges.

But her greatest challenge awaits. Can she and her lasso haul the multitudes back into cinemas, those that remain open as the pandemic continues to bite?

At the latest count, almost 50 major feature films have been pushed back to next year, or even to 2022, but Warner Brothers boldly decided to let Wonder Woman fly with a theatrical release.

Alas, assailed by the kind of cosmically unfortunate coincidence more suited to a movie script, that release comes on the very day that London goes into Tier Three and the capital’s 200 or so cinemas temporarily close their doors again.

But if you do live in an area where a pre-Christmas trip to the pictures is still an option, I recommend Wonder Woman 1984 wholeheartedly. It’s a blast. 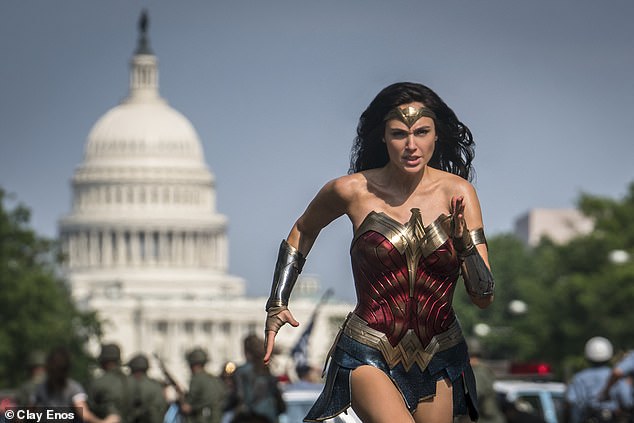 Pictured: Gal Gadot, starring in Wonder Woman 1984, that has been released to cinemas despite the on-going pandemic and almost 50 major feature films being pushed back

Notionally a sequel to the 2017 hit Wonder Woman, it really offers a stand-alone story, beginning with a kind of ancient-world version of It’s A Knockout, as the freckly young demi-goddess, Princess Diana of Themyscira (13-year-old Scottish actress Lilly Aspell), bests her elders in front of an amphitheatre full of toga-wearing Amazons. You might call her an Amazon prime.

The action then shifts to Washington DC, 1984. All grown-up and now played by Gadot, Diana Prince (Wonder Woman’s civilian name) works as an anthropologist at the Smithsonian Institution.

There she bonds with the diffident, hapless Barbara Minerva (Kristen Wiig), just hired as a gemologist, who yearns with all her heart to be as ‘strong, sexy, cool and special’ as her new pal, Diana.

Fortuitously, an ancient stone with strange mystical properties duly grants Barbara’s wish, but she casts off the shackles of her former personality way too enthusiastically, becoming the villainous Cheetah.

In the meantime, a failing corporate con-artist called Maxwell Lord (Pedro Pascal) has also got his hands on the stone, transforming his business fortunes and making him the world’s most powerful person.

Incidentally, director Patty Jenkins has actually felt compelled to deny that outgoing US President Donald Trump was in any way the influence for Lord’s character.

Whatever the case, Lord cannot contain his greed and, in league with Cheetah, propels the planet, still in the icy grip of the Cold War, to the very brink of nuclear catastrophe.

That’s OK, though, because averting global cataclysms has been Wonder Woman’s stock-in-trade pretty much since she first appeared in comic book form in 1941. 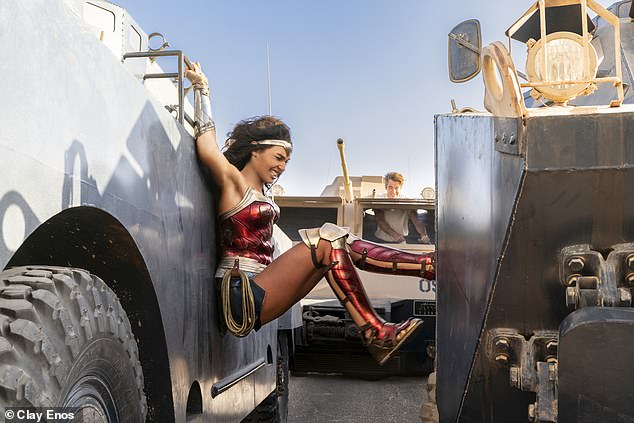 Wonder Woman’s greatest challenge still awaits – Can she and her lasso haul the multitudes back into cinemas, those that remain open as the pandemic continues to bite?

On the other hand, she is distracted this time by some wish-fulfilment of her own: Her lover from the first film, First World War pilot Steve Trevor (Chris Pine), has been conveniently reincarnated.

All this bowls along with crackling energy. It’s terrific fun, and for those who actually remember 1984, there are plenty of mischievous period details, such as the Miami Vice predilection for hoiking up jacket sleeves, evoking a year that was less Orwellian nightmare, more fashion horror story.

At first the essence of the plot seems almost childlike – after all, wishes coming true power all the best fairy tales and pantomimes.

But it gradually becomes clear that Jenkins and her co-writers are subverting the idea.

In keeping with Wonder Woman’s mythical origins, this is a King Midas tale neatly repackaged for Reagan-era America. Its not-so-subtle message is: Be careful what you wish for.

The film’s other, even less subtle, message is that the male of the species is really not all he is cracked up to be. With the shining exception of wholesome, handsome Steve, men are predatory, corrupt and lustful for power.

Wonder Woman 1984 is the MeToo movement distilled into two-and-a-half hours of popcorn entertainment, even if true feminists might question why both Diana and Barbara go quite so weak-kneed in succumbing to the charms of the opposite sex.

As so often, it’s those cast as baddies – especially the excellent Wiig, but also the similarly terrific Pascal – who really seize the opportunity to let loose.

But Gadot again shows her mettle in the title role, while the battalion of names listed as stunt performers in the film’s final credits testify to the number of exhilarating action sequences.

Wonder Woman 1984 is only the second movie of this magnitude, along with Christopher Nolan’s Tenet, to be released into cinemas since Covid-19 struck.

Over the next few weeks we will learn whether the pandemic has put the ‘bust’ into blockbuster.