What 21 celebrities eat for breakfast to start the day right 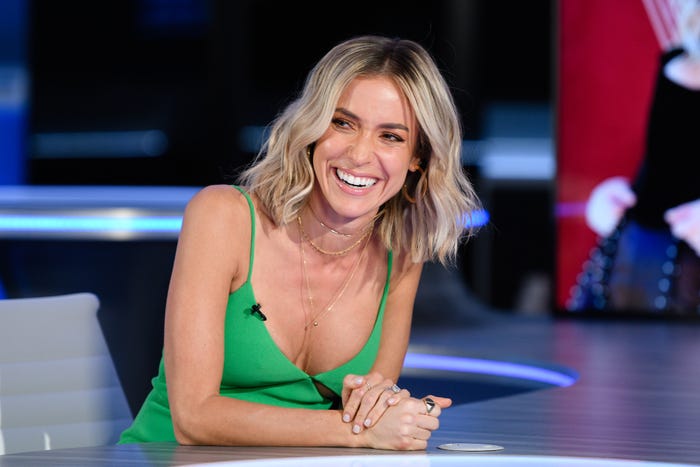 From mega-fit celebrities like Dwayne Johnson to celebrity chefs like Bobby Flay, we've found out what 20 celebrities eat for breakfast.

Many of them stick to your classics: eggs, green juice, smoothies, and toast. Avocados are a staple. But not everyone sticks to your typical meals, like Justin Timberlake, who eats two breakfasts.

Keep scrolling to see how 21 celebrities start their mornings.

Breakfast is Kristin Cavallari's favorite meal of the day. On weekdays, she goes for "smoothie, eggs, or espresso overnight oats." 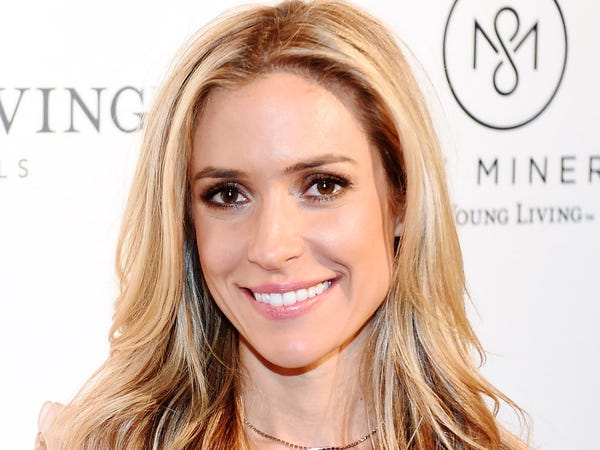 The "Very Cavallari" star shared her entire food routine with Insider's Rachel Askinasi in 2020, including her favorite meal of the day: breakfast.

During the week, Cavallari chooses between a few things: either "smoothie, eggs, or espresso overnight oats," or "Sometimes I'll make a little egg bowl and I'll use scrambled eggs, avocado, soft goat cheese, and spinach, and maybe a little hot sauce."

On weekends, when she has a bit more time, she'll make something more elaborate. "On the weekends, I love the lox breakfast bowl," she said. "It's like the next best thing to a lox bagel. I actually think it's better, to be honest."

For the last nine years, Reese Witherspoon has had the same green breakfast smoothie every day. 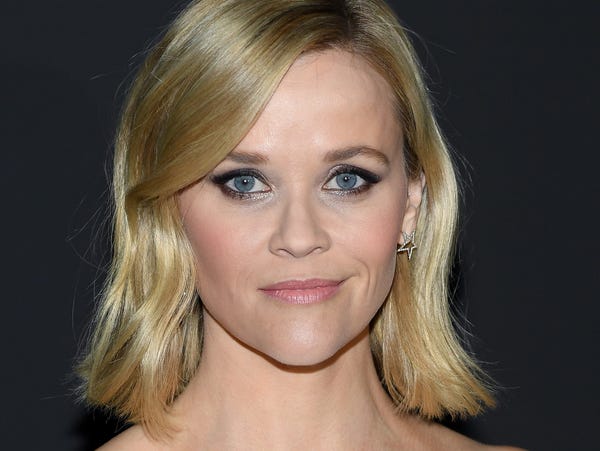 Witherspoon posted about the smoothie recipe on Instagram in May 2020, and the ingredients are: 2 heads of romaine lettuce, ½ cup spinach, ½ cup coconut water, 1 whole banana, 1 whole apple, 1 whole pear, and 1 whole lemon.

"I have this instead of breakfast," she told her Instagram followers. "Around 10 or 11 in the morning, and then I'm not hungry at all until around 1 o'clock!"

Ariana Grande, who is vegan, starts the day with fruit and oatmeal. 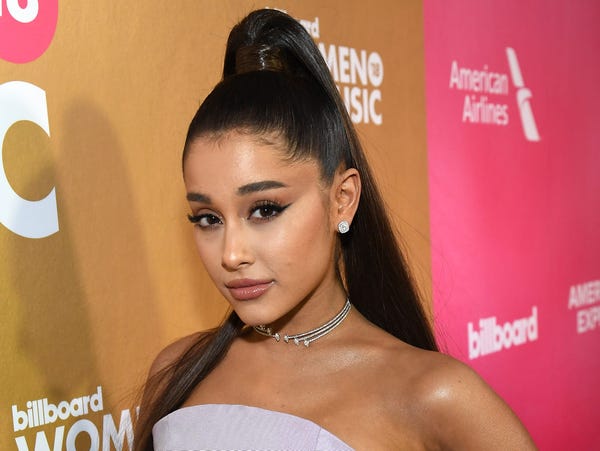 Grande has been vegan since at least 2013, and she reportedly follows a "Japanese macrobiotic" diet. A vlogger followed her diet in 2018 and found out the "NASA" singer is a huge fan of oatmeal, blueberries, strawberries, and other fruits.

An Insider contributor, Marilyn La Jeunesse, also tried to follow the star's diet, and was "baffled" by how Grande eats like this regularly. For her part, La Jeunesse also stuck with fruit and oatmeal for breakfast, and she also made her own acai bowls. 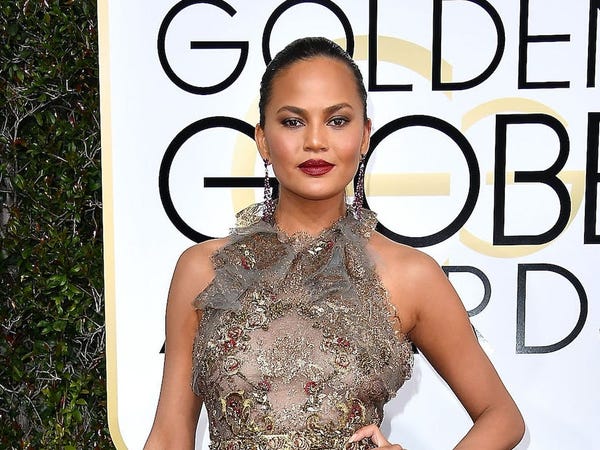 In 2017, Teigen told Delish that she starts every morning with eggs.

"I have to have eggs every day. I like a farmer's breakfast: two over-easy eggs, turkey bacon or pork sausage, sliced avocado, and grilled tomatoes," she said.

Antoni Porowski has coffee, supplements, and a smoothie. 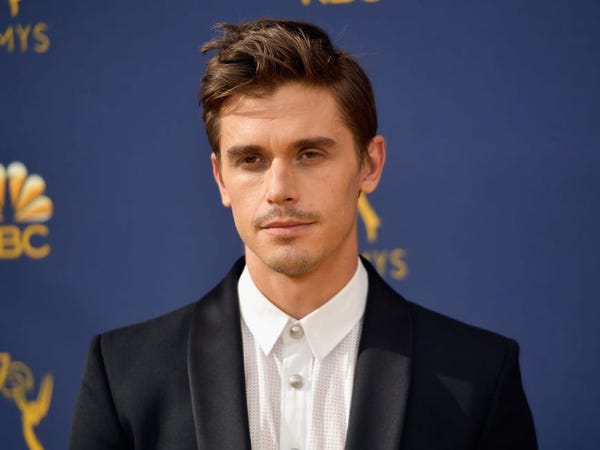 Last year, the "Queer Eye" chef gave Insider an in-depth rundown of what he eats in a typical day, and though breakfast may be the most important meal of the day, he doesn't actually eat anything until noon.

In the morning, Porowski typically wakes up at 7 a.m., makes a cup of coffee with oat milk, followed by some supplements and vitamins. His first real meal is a noon-time smoothie that he packs with "a frozen banana, a scoop of Olly Vanilla Velvet protein powder, about a teaspoon of cinnamon, two tablespoons of almond butter, a healthy serving of almond milk, and a few ice cubes," he told Insider.

Kaley Cuoco goes for the classic peanut butter on toast for her first meal of the day. 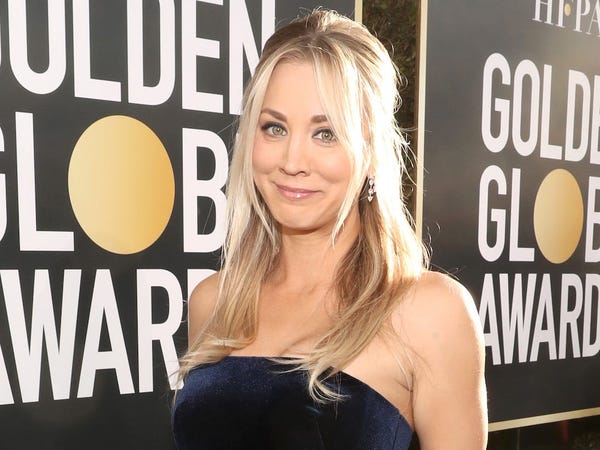 Cuoco, who considers herself a pescatarian, keeps it basic for breakfast every morning.

"When I wake up, I have the same little bit of peanut butter on toast every morning," she told Women's Health in 2016. Simple, yet satisfying. 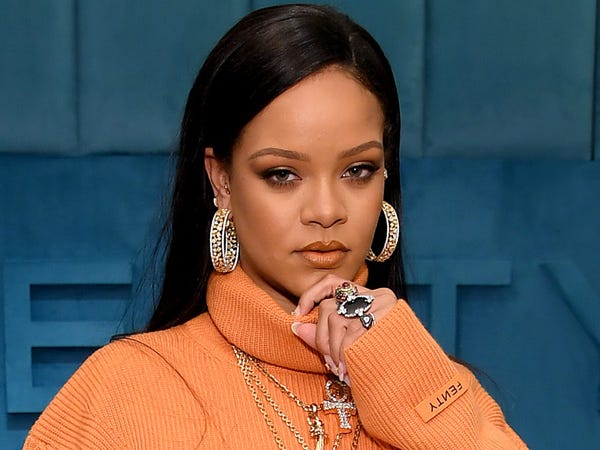 Rihanna has worked with a Jamaican-born personal chef Debbie Solomon for over five years. Solomon has spoken publicly about the mogul's diet, including on an episode of "The Doctors" in 2017. She shared that RiRi is all about eggs in the morning, probably for their source of protein.

As Insider's Nasha Smith writes, "Her typical breakfasts consists of four hard-boiled eggs, one slice of toast without the crust, and a mix of berries," according to Solomon. 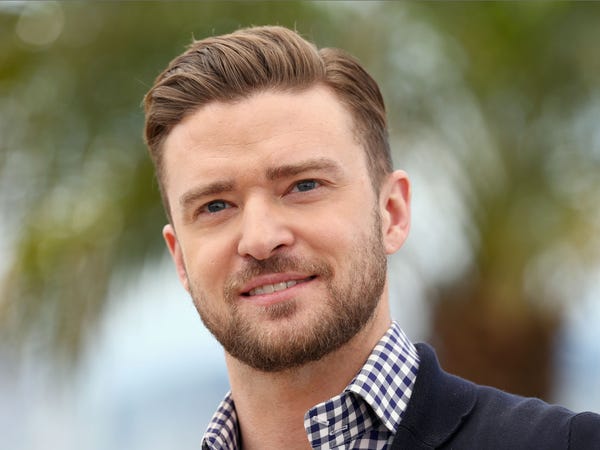 Timberlake explained that, as a fan of the morning workout, he eats before and after his gym sessions. He told Bon Appetit in 2012 that the pre-gym meal is "waffles with flax and almond butter and a scrambled egg," and his after-gym meal is either "a hard-boiled egg or protein shake." 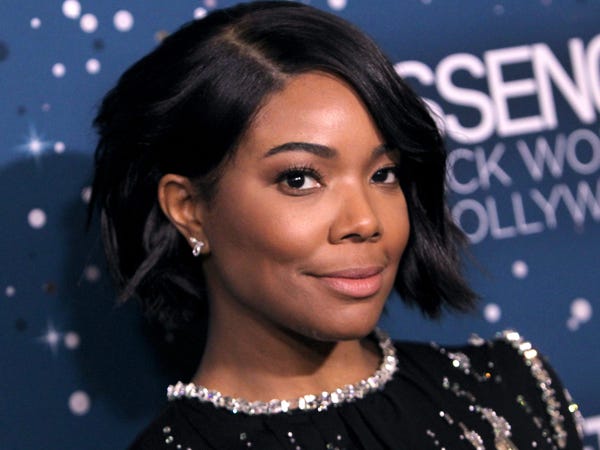 Union's personal chef Richard Ingraham has worked with the actress for awhile. One of his meals is "whole-wheat oatmeal hotcakes with banana toasted almonds, blueberries, and chocolate hemp seeds," which Insider's Sara Greenfest made when she emulated the star's diet.

"I was a little nervous at how they'd come out because they're made with flaxseed, whole wheat flour, and rolled oats, I kind of pictured something chalky tasting, hard pancake but I was so wrong. These are delicious," Greenfest wrote.

Jenna Dewan is another longtime vegetarian who swears by the green smoothie. 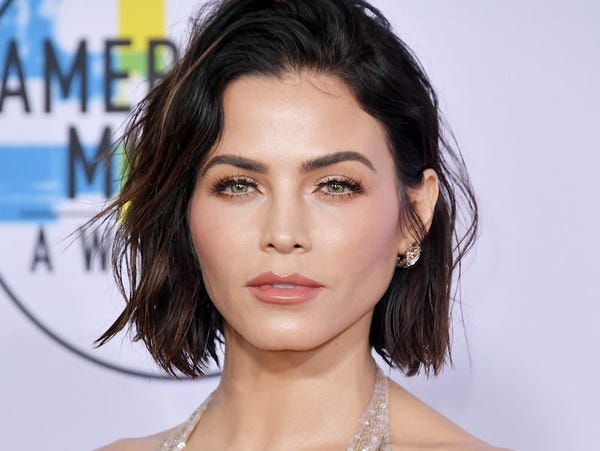 The dancer/actress has switched between veganism and vegetarianism for over a decade. On her YouTube channel in 2018, Dewan explained her typical breakfast varies between a pre-made smoothie, or one of her own making.

She either goes for Kimberly Snyder's Glowing Green Smoothie (which is also what Witherspoon drinks), or a smoothie that contains "cod liver oil, black sesame seeds, coriander, parsley, or spirulina."

"I do green smoothies. I drink them every morning," she explained. "It's great fiber, you get your veggies right off the bat. It's great for picky eaters."

Ashley Graham also opts for a green juice in the morning. 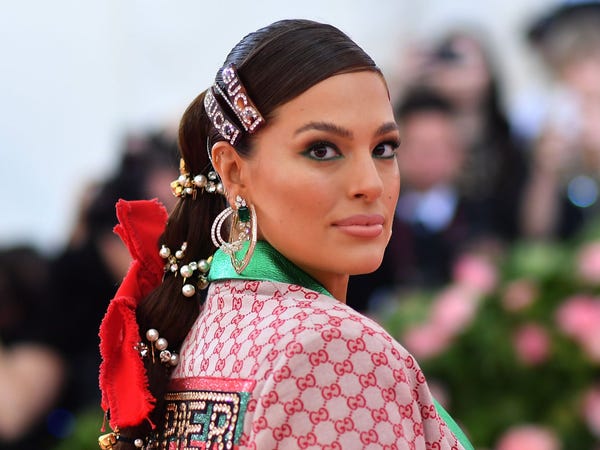 Graham told Stylecaster in 2015, "A green juice a day keeps the doctor away! My favorite blend is kale, lemon, ginger, beets, apple and parsley."

What does famed chef Bobby Flay eat for breakfast? That'd be a yogurt with berries. 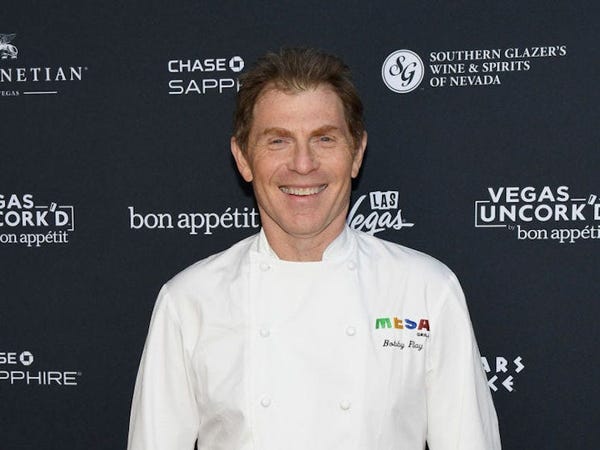 Flay told Bon Appetit in 2013 about his simple breakfast preferences. His first meal of the day "usually consists of something like Greek yogurt with some fresh berries and honey or pomegranate molasses. Or I'll make a smoothie with Greek yogurt and blueberries. My favorite smoothie is really simple: Greek yogurt, lots of fresh blueberries."

Megan Fox sticks the "five-factor diet," which means she eats five small meals a day. Breakfast is either egg whites or a smoothie. 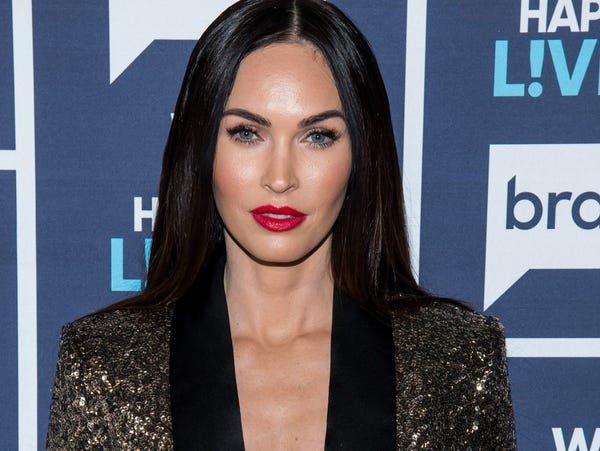 Fox follows a diet given to her by her trainer Harley Pasternak, who recommends the "five-factor diet," which allows for five small meals a day, with a few snacks in between. According to a 2017 interview with Pasternak, Fox's day starts with egg whites, or a "red smoothie" that contains "seasonal berries, along with chai tea, a scoop of protein powder and a little bit of almond milk."

Jennifer Aniston likes her eggs over easy, without too much "yolkage." 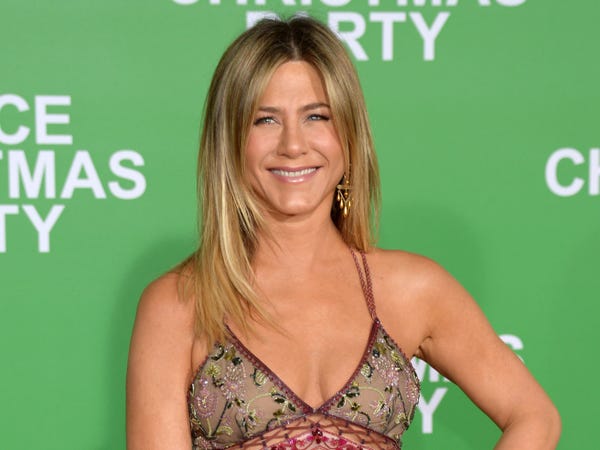 Aniston has spoken about how she's tried fad diets like the grapefruit diet in the past, but now she sticks to a more healthy, sustainable diet. In 2016, she told Elle, "When I wake up, I have warm lemon water and then I have a shake or avocado and eggs, which is one of my favorites."

Specifically, she enjoys her eggs over easy, she also told Bon Appetit in 2016. "I crack them into a bowl and I'll add a white or two into that and pour it all into the pan to get more protein sans too much yolkage."

Much like other celebs, Aniston also sometimes opts for a smoothie. She adds "bananas, cherries, a protein powder of some sort, almonds, cacao powder, and all sorts of other weird antioxidant stuff I can't remember — with almond milk," Aniston told Bon Appetit.

Idris Elba has said that the best thing he cooks is toast. 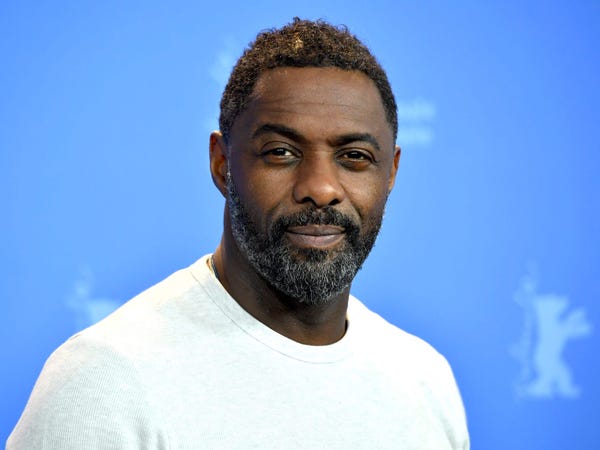 The former Sexiest Man Alive keeps it simple for his breakfast. One of his health rules is to always eat a good breakfast, which for him, is "usually a healthy cereal and eggs," but he boasted to Men's Health in 2018 that the "best thing that I cook is toast. I'm really good at making some toast. Believe that!" 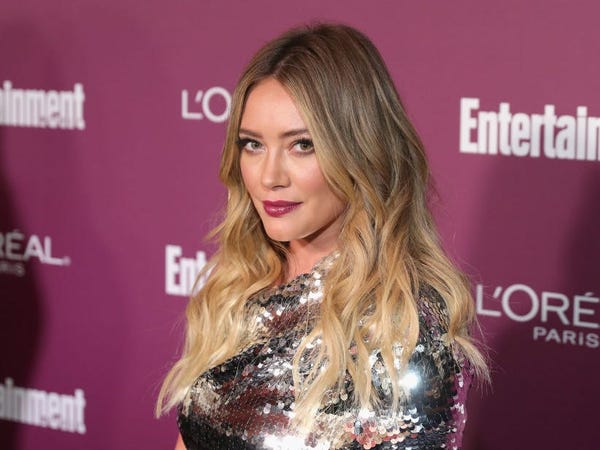 Duff explained to Delish in 2016 that she needs options, or else she'll get bored. Her go-tos are "oatmeal with raisins, maple syrup, and almond butter or toast with avocado or egg whites," or a protein shake.

Her protein shakes normally include "yogurt or milk, berries, almond butter, and a vanilla egg-white protein powder," while her green smoothies have "spinach, celery, parsley, apple, pear, banana, and lemon." 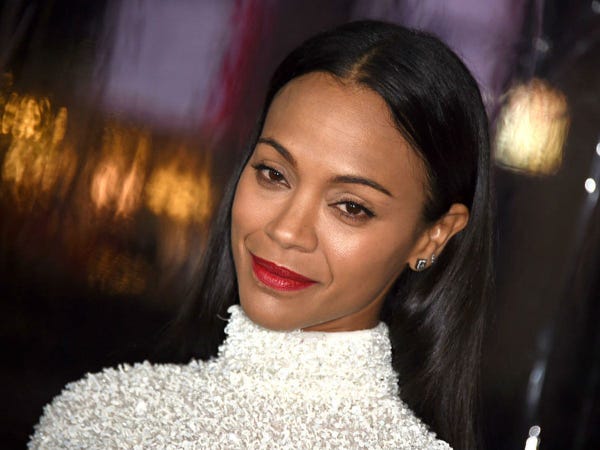 Saldana told Bon Appetit in 2016 that she gets "creative" with eggs, but also enjoys "mashed avocados and sliced tomatoes on toast." She even posted about her "Guacamole a la Bruschetta" on Instagram in 2015.

When preparing for roles, Dwayne Johnson eats over 5,000 calories in a day, and that starts with breakfast. 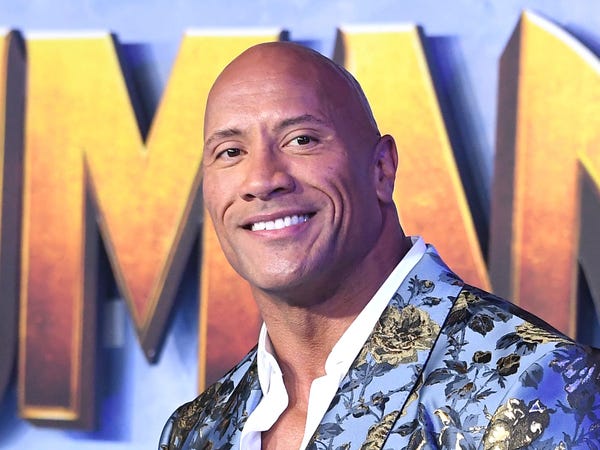 Selena Gomez is partial to a breakfast burrito. 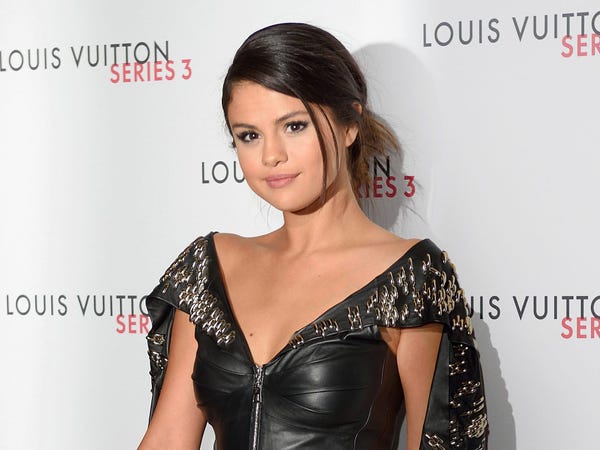 Gomez's trainer Amy Rosoff Davies gave Cosmopolitan all the details about Gomez's diet in 2016. According to her, the "Rare" singer starts each morning with "half of a healthy breakfast burrito of scrambled eggs, chorizo, avocado, rice, and beans; or, full-fat Greek yogurt and granola." 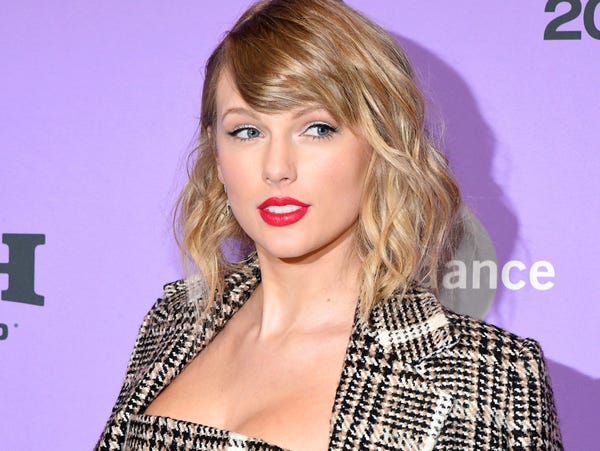 Swift's breakfast seems a bit heartier than other celebs. "I love making buckwheat crepes with ham, parmesan cheese, and a fried egg on top. It's my go-to breakfast," Swift told Bon Appetit back in 2012. She added that she prefers orange juice to any other morning beverage. 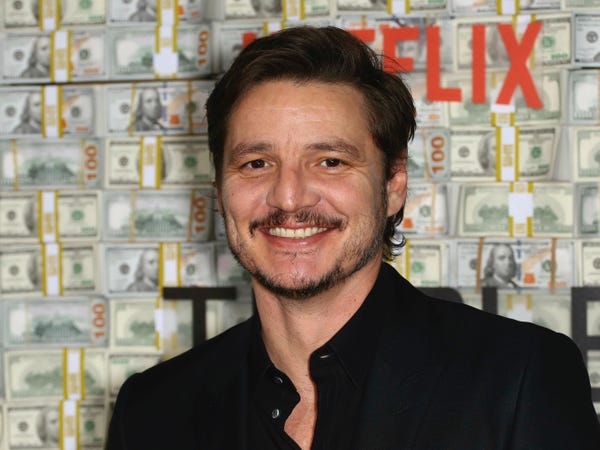 In a 2014 interview with the New Potato, Pascal shared what his ideal food day would start with: "I'd start with very strong, very tasty espresso, runny eggs and buttery toast, someone to share blueberry pancakes with, and then more coffee."

Jill Duggar Opens Up About Wearing Pants, Going Therapy & Why She’s Not Opposed to Tattoos