Triathlons Fight Decline and Seek Ways to Attract the Young

Rachael Freedland had plenty of doubts when she joined New York City’s Empire Triathlon Club three years ago at age 35. She had long wanted to compete in the multisport races, but at that point, she could not run a mile, had barely swum since childhood and did not feel ready to invest in a fancy, lightweight racing bicycle like the ones many of her fellow competitors would be using.

To Alison Kreideweis, the Empire club’s founder, Freedland looked like an ideal recruit.

After years of explosive growth in the United States, triathlon participation had entered a steep decline, its appeal diminished among younger people — in part, industry observers say, because the increasing sophistication of equipment had driven up costs.

So Kreideweis, in line with the sport’s increasing emphasis on promoting the races as doable, told Freedland not to worry: Just go ahead and use the bike you have, no matter how clunky. In her first triathlon, 10 weeks after she joined the club, Freedland rode 40 kilometers on a 10th birthday present from her grandmother.

She has a new bike now and has finished four triathlons, becoming a committed member of the sport’s 35-39 age group, once its largest demographic.

“I changed my life around,” Freedland said. “I changed over my happy hours to going for runs and catching up with friends that way.”

Today, the largest age group of triathletes is 45-49, and by 2018 membership in U.S.A. Triathlon, the national governing body in the sport, had dropped about 25 percent over five years.

As the industry grapples with how to generate new interest, an emphasis on making races less intensely competitive and generally more fun has become a priority for many in the triathlon business. To attract younger participants, they are also aiming to make the experience more affordable.

“It’s quite the financial challenge,” said Thom Richmond, 49, who operates a series of triathlons in California and has been offering free training sessions since 2010. “It’s why a lot of older people or more wealthy people can afford it.”

According to a survey that U.S.A. Triathlon conducted among its members in 2016, the average income of a triathlete was over $100,000 a year, about $40,000 more than the current median in the United States.

Although a U.S.A. Triathlon membership is only $50 a year, the price tag associated with racing is far higher. The average entry fee, $90, has held fairly steady for several years, according to people in the business and a recent annual report of race trends, but some registration fees can exceed $300. The Escape From Alcatraz, one of the most expensive triathlons in the country, is $750, a $300 increase from 2015.

A road bike, the type used by most racers, generally costs at least $500, with many priced at over $1,000. Pool time can also be expensive.

Kreideweis, who founded the Empire Triathlon Club in 2010, said the sport needs to do a better job of telling potential triathletes that they don’t need top-of-the-line equipment.

“Once people get hooked, you can always upgrade things as you go,” Kreideweis said. “It’s just showing people that you can do this with what you have and you don’t have to spend a fortune in order to participate in the sport.”

Triathlons also have more competition for participants, including relatively new events that are more like parties than races, such as color runs (entrants are doused with bright powder along the way) and mud runs (obstacle courses with a lot of dirt involved).

“I think race directors need to be better at taking the temperature of the audience that they want to attract and building a race that scratches that itch,” said Dan Empfield, a 40-year veteran of the sport and a U.S.A. Triathlon Hall of Famer.

He recently participated in the Ugly Dog Triathlon in Grass Lake, Mich., which offers four race options, including a run-bike-run for those who don’t feel like swimming.

Empfield said race directors should look at the way triathlons were set up in the early 1980s. Back then, he said, everyone focused on having fun.

“There was no template, no formula, no governing body, no manual,” he said. “We were all making it up.” 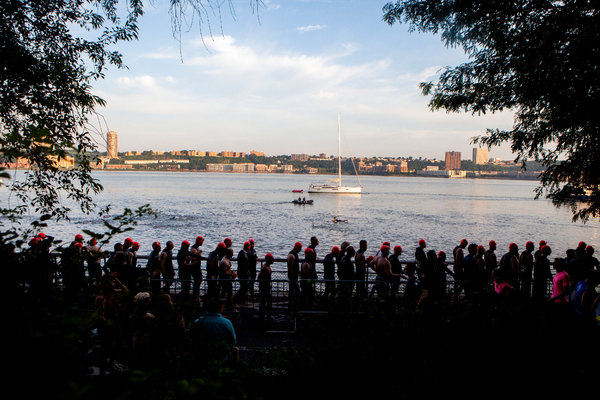 Scott Hutmacher, the brand manager for Life Time Tri, which runs one of the largest triathlon series in the United States, said it had recently changed the way it organizes events so that athletes can start alongside family and friends, rather than being strictly grouped by age.

“We wanted to bring back the excitement factor to triathlon,” Hutmacher said.

Last year, 3,479 people took part in the New York City Triathlon, a decline from its peak of 3,857 in 2010 but an increase from the 2017 race, which drew only 3,158. This year’s race was canceled last week because of extreme heat, but there will be a short triathlon this weekend in Central Park, its registration capped at 300 people.

Despite the decline in participation, there does not appear to have been a significant reduction in the number of races. U.S.A. Triathlon said it had sanctioned 4,275 in 2018 versus 4,327 in 2013, but the organizers of some events, such as the Life Time series, have opted to work apart from the national governing body.

U.S.A. Triathlon is working on programs to help attract young adults and women, who have lagged in participation. Athletes 18 to 24 made up only 4 percent of U.S.A. Triathlon members in 2015, the organization said, and women made up less than 40 percent of the overall membership.

Some progress could come in the college ranks. The N.C.A.A. made the triathlon a so-called emerging sport for women in 2014, and there are now 30 varsity teams — 10 short of the number needed for the sport to be fully sanctioned at the end of the test period in five years.

Tim Yount, the chief sport development officer for U.S.A. Triathlon, said that there is no set plan for introducing a men’s varsity program, but indicated that one could follow.

“We know that an N.C.A.A. program in isolation is not going to do that,” Yount said. “When you build programs like this, you reach people in these communities. You help expand the sport to people who would never hear of it.”