Tom Brady and Donald Trump’s friendship dates back to the early 2000s when the quarterback first started winning Super Bowls with the New England Patriots. The two became friendly after Brady judged a beauty contest for Trump. “I got to know him when he was a judge at a jitterbug contest I entered after the Patriots won the Super Bowl,” Trump said in a 2004 interview with Playboy (via Newsweek). Over the years, the two kept in touch. “He would call me after games, ‘I watched your game Tom, let’s play golf together.’ So 2003, 2004, that’s kind of the way it was,” Brady said on “The Howard Stern Show” in 2020 (via Sporting News).

A lot was made of their friendship during Trump’s campaign for the 2016 presidential election, and Brady drew a lot of attention when a red “Make America Great Again” hat was spotted in his locker, per CNN. Brady wound up skipping the White House visit in 2017 after the Patriots won the Super Bowl. The quarterback made it clear on multiple occasions that he supported Trump as a friend, but was not interested in backing him politically. “But the whole political aspect came … It was uncomfortable for me,” Brady told Stern (via Sporting News). “The political support is totally different than the support of a friend,” he added.

Months after winning the Super Bowl with the Tampa Bay Buccaneers in February, Brady visited the White House, where he made jokes about President Joe Biden (and former President Trump) that had people buzzing. 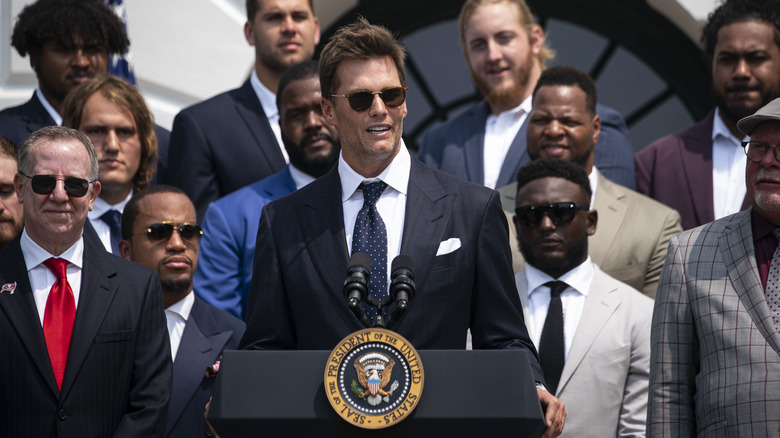 The Tampa Bay Buccaneers visited the White House after winning Super Bowl LV, and Tom Brady reportedly made jokes that gently ribbed President Joe Biden while seemingly taking shots at Donald Trump. Speaking on the White House lawn in July 2021, Brady mentioned the early struggles his team had and the doubts they faced.

“Not a lot of people think that we could have won. In fact, I think about 40% of people still don’t think we won. You understand that, Mr. President?” Brady said while looking at Biden (via CNN). “I understand that,” Biden replied. This was a reference to the contingent of Trump supporters who believe the former president won the 2020 election. Brady also joked about people calling him “Sleepy Tom” because of an on-field gaffe he made (via the New York Post). This was a playful allusion to the “Sleepy Joe” nickname Trump supporters gave Biden.

Many believed Brady’s jokes were at Trump’s expense. “Gotta confess. Didn’t have Tom Brady trolling Donald Trump at the White House on my July bingo card,” veteran news anchor Dan Rather tweeted out after Brady’s speech. “Not only did Tom Brady accept an invitation from President Biden to come to the White House, he even poked fun at the former guy,” one Twitter user wrote. “If you know anything about Donald Trump, having Super Bowl champion Tom Brady visit the White House and mock him is probably one of the most painful experiences of his life,” another tweeted.