Today Show host Hoda Kotb opened up about her private divorce which was shared on-air without her permission.

The TV star, 58, split from her fiancé Joel Schiffman earlier this year following an eight-year relationship, during which they welcomed daughters, Haley and Hope. She was previously married to Burzis Kanga from 2005 to 2008, but her co-host Kathie Lee Gifford was the reason their split became public knowledge.

WATCH: Inside Hoda Kotb’s family life – all the details

During an appearance on Watch What Happens Live with Andy Cohen alongside Jenna Bush Hager, Hoda said she admitted to Kathie that she hated Valentine’s Day while getting ready in the makeup room before the holiday special. She explained the reason was due to the links to her ex-husband and their subsequent divorce, but she didn’t expect Kathie to share the “huge grenade” during the show!

When asked if any of her co-hosts have shared a story about her on-air that she wishes they hadn’t she replied: “Kath did it to me, she threw one huge grenade once.

“We go out to the set. It’s all decorated with flowers and hearts, and I go, ‘Good morning! Happy Valentine’s Day!’ And she looks at me and she goes, ‘Not for you!'” 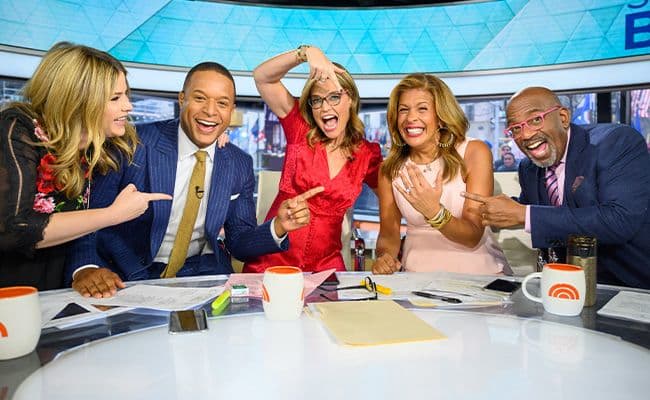 The TV star was previously engaged to Joel Schiffman

“Anyway, it happens,” Hoda concluded. She has since come to terms with sharing her personal life with her fans, as she announced she had split from her long-term partner financier Joel on-air in January 2022.

Hoda and Joel dated for six years before he popped the question with a white diamond and sapphire engagement ring thought to be worth $250k in November 2019. They delayed their wedding for several years amid the coronavirus pandemic before announcing their decision to separate.

In an emotional statement, Hoda said to Jenna: “Joel and I have had a lot of prayerful and really meaningful conversations over the holidays, and we decided that we’re better as friends and parents than we are as an engaged couple.

“We decided that we are going to start this new year and begin it kind of on our new path as loving parents to our adorable, delightful children, and as friends,” she said.