Tiger Woods has broken his silence about his ‘painful’ experience in rehab following a near-fatal car crash back in February.

Tiger Woods, 45, has opened up about his recovery process following a near death experience in a February car crash. The golf pro has been in rehab after suffering a devastating leg injury, and undergoing surgery. “This has been an entirely different animal,” Tiger told Golf Digest on May 27. “I understand more of the rehab processes because of my past injuries, but this was more painful than anything I have ever experienced.”

One doctor who treated the A-list athlete said he suffered extensive injuries in his leg and foot, which required serious surgery. A crash report later revealed that Tiger was also “knocked unconscious, laceration to the lower front jaw, bruised right and left rib cage, fractured right tibia and fibula, possible right ankle injury.” He spent time in two different hospitals before returning to Florida to recuperate.

“My physical therapy has been keeping me busy. I do my routines every day and am focused on my No. 1 goal right now: walking on my own. Taking it one step at a time,” he explained, noting that the support from both friends and fans has been “incredible … I have had so much support from people both inside and outside of golf, which means so much to me and has helped tremendously.” 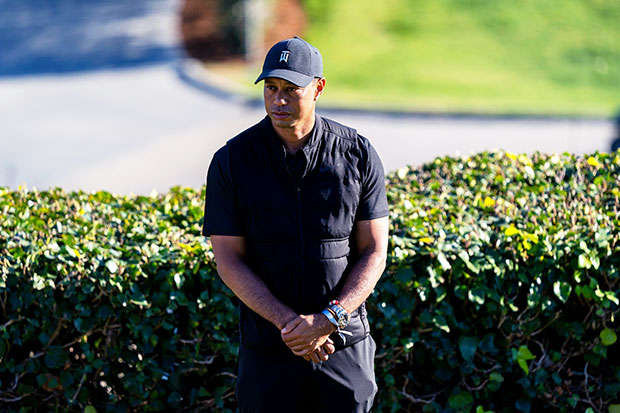 Tiger was spotted for the first time since the near-fatal crash, rocking a leg brace and crutches as he returned to the golf course on Friday, April 23. He flashed a big smile as he posed next to his “rehab partner,” his dog Bugs. “My course is coming along faster than I am,” he wrote with a smiling emoji. “But it’s nice to have a faithful rehab partner, man’s best friend.”

Fans were relieved to see Tiger recovering well after the “single-vehicle roll-over traffic collision on” near Rancho Palos Verdes just months prior. The golfer’s 2021 Genesis SUV rolled down an embankment, severely damaging the vehicle as evident in post-accident photos. In other videos, his car could be seen traveling uphill behind a grey minivan on Hawthorne Blvd. at 7:05am, which was about five miles from the location of the accident.