Michael Strahan was seemingly on vacation when his ex-wife and the mother of two of his kids, Jean Strahan, got arrested in Manhattan. The NFL legend turned “Good Morning America” host had been taking a break from the daytime news show for the past two weeks, but his latest family news may see him switch off vacay mode for the time being, per Hello! magazine. Michael’s second wife, Jean, was arrested and taken into custody on June 25 for allegedly breaking an order of protection, according to Page Six.

Jean was married to the former New York Giant for seven years, with the pair welcoming twin daughters Sophia and Isabella before divorcing in 2006. Jean was reportedly awarded $15.3 million and $18,000 a month in child support following their split, per The Sun. But the relationship has since continued to decline after Michael accused her of orchestrating a “pattern of abusive conduct” toward their 16-year-old children and thereby sought full custody.

Jean, on the other hand, alleged that Michael hadn’t assisted financially, particularly when it came to the girls’ horseback-riding costs. Jean splits time between North Carolina and New York City. While the pair eventually settled in court by way of joint custody, it seems that Jean has bad blood with yet another former partner. 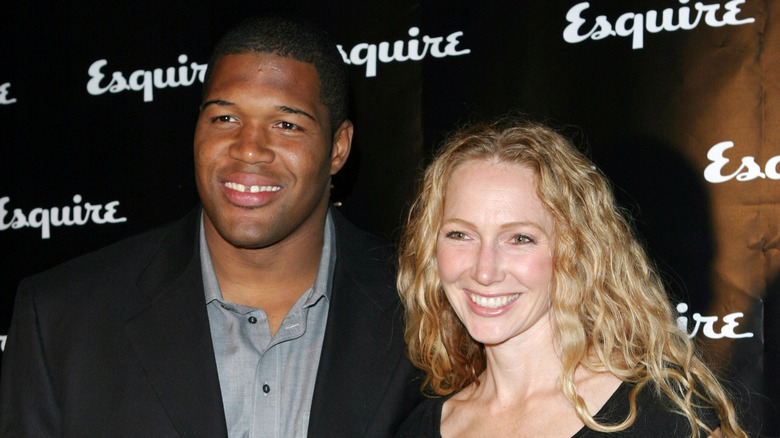 North Carolina native Jean Strahan allegedly appeared at her former girlfriend’s home on the Upper West Side, despite a restraining order against her. Police told Page Six that Jean showed up at Marianne Ayer’s property at around 7 p.m. on June 25 and was charged with criminal contempt for allegedly violating an order of protection.

According to court documents obtained by TMZ, Ayer has accused Jean of grand larceny, disorderly conduct, harassment, and forcible touching. Ayer even alleged the 54-year-old threatened her with a plastic gun and kicked her German shepherd. Jean’s arrest also ironically comes after she accused Michael Strahan of stalking her, claiming he had followed her with private investigators at her home in North Carolina, per The Sun. His lawyers, however, denied her accusations and said, “The notion that she is under surveillance is absurd and could never be proven.”

While the former NFL star has yet to comment on his ex-wife’s arrest, we certainly hope their 16-year-old daughters are also okay amid this latest family crisis.