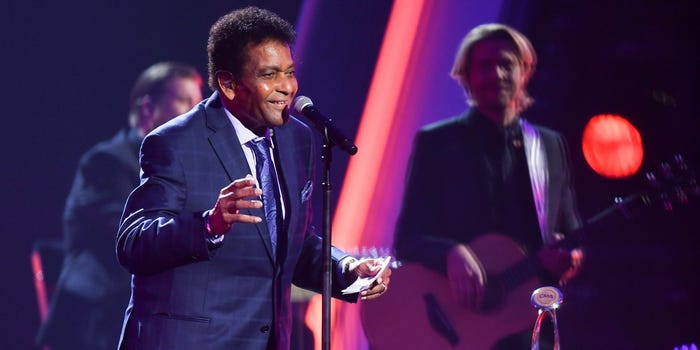 Country music legend Charley Pride died Saturday in Dallas at the age of 86 from coronavirus-related complications, the Associated Press reported.

A post on Pride's official Facebook page said he was admitted to the hospital in late November with "COVID-19-type symptoms."

Pride's last performance was at the Country Music Association Awards (CMAs) on November 11 at Nashville's Music City Center. The awards show was televised and included only cast and crew members and performers as attendees.

On December 13, representatives for Pride and the CMA released a joint statement that denied connections between the late musician's COVID-19-related complications and the November awards show and outlined precautions the event organizers followed in order to hold the live event.

"Everyone affiliated with the CMA Awards followed strict testing protocols outlined by the city health department and unions," the statement says. "Charley was tested prior to traveling to Nashville. He was tested upon landing in Nashville, and again on show day, with all tests coming back negative. After returning to Texas following the CMA Awards, Charley again tested negative multiple times."

"All of us in the Country Music community are heartbroken by Charley's passing. Out of respect for his family during their grieving period, we will not be commenting on this further," representatives for Pride and the CMAs wrote.

The statement seemed to address speculative connections about Pride's death from coronavirus-related complications and the November event.

On Saturday, country singer Maren Morris remembered Pride in a tweet praising his "voice" and "humility."

Morris, who also performed at the CMAs, mentioned the awards ceremony in an earlier tweet about Pride's death.

"I don't want to jump to conclusions because no family statement has been made, but if this was a result of the CMAs being indoors, we should all be outraged," Morris wrote in the tweet viewed by Insider but was later deleted. "Rest in power, Charley."

Singer Brandi Carlile echoed Morris and criticized the awards ceremony that she said "endangered him" and "easily could have been" the source of his infection.

"Honestly you're right to acknowledge what everyone is wondering & as usual YOU have a lot to lose for asking the question," Carlile wrote. "Thank you for being human. Whether that was the place he got it or not- they endangered him & it easily could have been. It's quietly bothered me for weeks."

Pride attended the 2020 CMAs to receive the Willie Nelson Lifetime Achievement Award, which recognizes "an iconic artist who has attained the highest degree of recognition in Country Music" and was established to recognize both "national and international prominence and stature through concert performances, humanitarian efforts, philanthropy, record sales and public representation at the highest level."

Pride was the first Black musician to be inducted into the Country Music Hall of Fame. He won three Grammy Awards and had more than 30 No. 1 hits between 1969 and 1984.