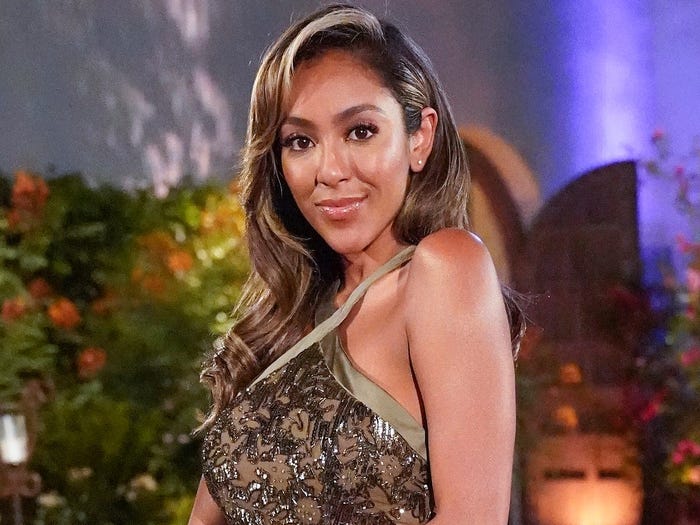 The "Bachelor" franchise has faced criticism almost from the beginning for its lack of diversity, causing stars and contestants alike to worry about whether they'd be accepted while trying to find their true love.

Catherine Lowe, who is half Filipino, recently told Insider that she had worried Sean Lowe wouldn't be attracted to her on the show back in January 2013 because she was a biracial woman.

It's been seven years since Lowe's season, but Tayshia Adams had similar fears before she stepped in to take Clare Crawley's place as the star of "The Bachelorette." Crawley abruptly left the hit ABC reality dating competition after falling in love and later becoming engaged to contestant Dale Moss.

"In the back of my head, wondering if I was going to be someone's type was definitely a concern I had," Adams — who is African-American and Mexican — told Insider. "Just because Clare was the original Bachelorette and Clare and I are very different women. So yeah, it was definitely something of concern."

While Crawley became the first Latina "Bachelorette" in the show's history, Adams was the second Black woman and second Latina woman to star in "The Bachelorette."

But Adams said those thoughts disappeared once she began having conversations with the contestants.

"Once I talked to the guys, I don't think that was even a thing anymore," she said. "I think just being confident on my own was always like, a thing I've had to do."

Adams is from Orange County, California, where 71% percent of the population is white and only 3.6% identify as being multiracial or biracial.

In a rare moment in the "Bachelor" franchise, she spoke about her biracial upbringing with Ivan Hall, who is half Black and half Filipino.

"Being in Orange County, surrounded by a lot of people that don't look like me, being the only person who looks like me, I'm realizing that I've been trying so hard my whole life to blend in because I knew I was different, you know?" Adams told Hall.

Hall revealed that he could "100% relate" to her experience, as he had gone to college in Lubbock, Texas, where 80% of the population is white.

"There weren't many Black people there," he said. "[I] remember those things like randomly walking down, next to my campus and being called the n-word. It happened to me all the time in college. And that's just not right."

The reality star admitted that it was a necessary conversation to have with cameras rolling, especially in terms of their courtship.

"That's a real conversation that two people generally would, and should, have if they're looking to find a relationship," she said of the onscreen moment with Hall. "Regardless if the show has talked about it in the past or not, if it's something that you feel and it's something that's important to you, it should be talked about."

Biracial contestants in Bachelor Nation have also spoken up about how hard it is to appear on the show, including Sydney Hightower

Along with Adams, "Bachelor" contestants also told Insider that it's not easy being biracial in Bachelor Nation.

Sydney Hightower, who competed on the 24th season of "The Bachelor," starring Peter Weber, told Insider that hearing comments from viewers about her appearance was particularly painful.

"It was absolutely awful and the brunt of it was about my outward appearance," the retail marketing manager, whose father is African-American and Dominican, recalled. "Oh, your lips are too big, your nose is too wide, and also just calling me the n-word. They go for the lowest they can."

But Hightower said she thought it was important to discuss her biracial identity with Weber, who is half-Cuban, during her time on the show.

"Peter would not have been able to understand me and why I am the way I am," she said of why she opened up about her identity on the show. "The steps that it took me to get where I am, and the things that had to happen to me to build myself up to the strong woman that I am now, I had to share those things with him."

Despite the challenges that come with casting diverse stars and contests on "The Bachelorette" and "The Bachelor," producers behind-the-scenes continue to make efforts to diversify who we see fall in love on TV weekly.

Host Chris Harrison, who is also an executive producer for the show, detailed the changes the two ABC series are making.

"There's obviously a lot of things you won't see behind the camera — hiring practices in crew, producers, [and] people being promoted," Harrison told Insider back in October, "a lot of steps that won't get as much limelight, but are as equally important."

But Harrison admitted that the series still has a lot of work to do.

"At the end of the day, 'The Bachelor' and 'Bachelorette' have always been above love and relationships," he added. "You want to see your love represented on screen, and to not do that is a failure. And that's something we aim to be better at and do better at."

Lowe said she believes the producers are "definitely more aware of the demands for a more diverse cast every season."

"There's so many people out there and being exposed to other kinds of love stories is really important for our society," she added. "I think it's going in that direction and I'm excited."