The Princess of Wales has made a few appearances in the Duke and Duchess of Sussex’s Netflix docuseries, Harry & Meghan.

One of the most memorable photos was taken behind the scenes at the royal wedding in May 2018, which Kate attended alongside her husband Prince William and their two young children Prince George and Princess Charlotte. The Princess was all smiles as she chatted with guests at the wedding reception at St George’s Hall at Windsor Castle, hosted by the late Queen Elizabeth II, with one placing their hand on her shoulder as they greeted one another.

Kate looked elegant in a tailored Alexander McQueen coat dress in a very subtle primrose yellow, which some mistook as cream. It was a recycled look that she had previously worn at Princess Charlotte’s christening in 2015 and the Trooping the Colour in 2016 – perhaps a deliberate choice in order to prevent upstaging the bride.

She teamed it with a floral hat, nude heels and drop earrings in a matching yellow hue, while her children – who played special roles in the wedding – looked adorable in their smart outfits.

IN CASE YOU MISSED:

Meghan Markle’s father’s family: who are they and who features in the documentary? 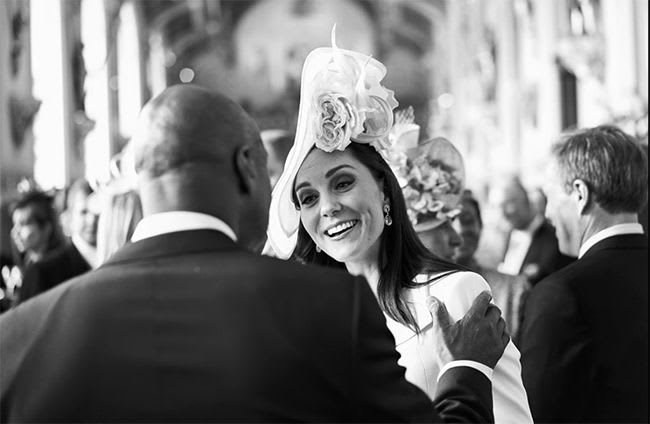 Alongside his fellow page boys, George wore a mini version of Prince Harry’s Blues and Royals uniform while bridesmaid Charlotte wore a white dress, a floral headband and Mary Janes with the wedding date embroidered on the soles.

The photo of Kate wasn’t the only rare peek inside the couple’s wedding album in their Netflix docuseries. The royals also shared a look at King Charles tenderly kissing the bride on the cheek as he walked Meghan down the aisle, a black-and-white photograph of Prince Harry raising a toast during his emotional wedding speech, and the moment the couple cut their wedding cake with a ceremonial sword.

TRENDING: 9 biggest revelations from the final episodes of Harry & Meghan