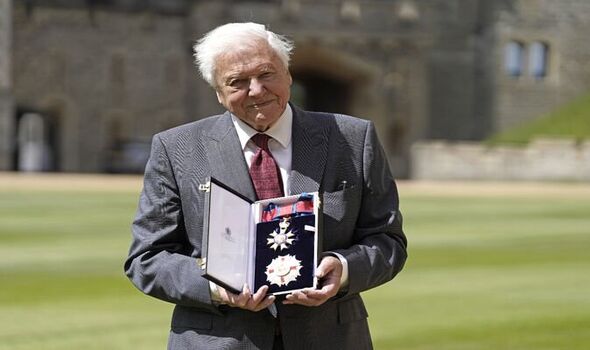 The title is higher up the honours hierarchy than the Knight Bachelor the Queen gave him back in 1985. It was awarded in recognition of his recent natural world documentaries and climate change campaigning.

The accolade comes after the beloved broadcaster featured in a segment of the Platinum Jubilee Party at the Palace on Sunday.

A clip of Sir David was projected on to the Palace, while Prince William highlighted the efforts of “visionary environmentalists.”

Toby, 55, was awarded an OBE for services to drama.

He is famous for roles as diverse as Dobby the house elf in the Harry Potter movies and Arthur in The Play What I Wrote, which earned him a Laurence Olivier Award.

Eve, who won her second Olympic medal in Beijing earlier this year – a gold to add to 2014’s Sochi bronze – did the double again yesterday. The GB curling captain, 32, picked up her MBE from 2020 and a 2022 OBE for services to the sport.

She said: “The chance to receive them together was really special. [Prince Charles] spoke a little bit about curling in Balmoral.”