The American flag is “tattered, dated, divisive, and incorrect” and needs to be updated, singer Macy Gray argued this week in an op-ed written for Juneteenth.

But the piece, published Thursday by MarketWatch, received a quick rebuke from a few prominent conservatives.

She argued that Old Glory has “replaced” the Confederate flag, implying it is a symbol of racism.

“It no longer represents ALL of us,” Gray wrote. “It’s not fair to be forced to honor it. It’s time for a new flag.”

“It no longer represents ALL of us. It’s not fair to be forced to honor it. It’s time for a new flag.”

She went on to say a new flag should have 52 stars, with the new pair representing Puerto Rico and Washington, D.C.

She claimed both the U.S. territory in the Caribbean and the nation’s capital city deserve statehood and that the supposed purity and innocence represented by the flag’s white stripes is a fallacy.

“America is great,” she wrote. “It is beautiful. Pure, it ain’t. It is broken and in pieces.”

She suggested the stripes could be off-white and the stars the “colors of ALL of us — your skin tone and mine.”

The 53-year-old Ohio native, born Natalie Renee McIntyre, added that she believes America embodies the blue “vigilance and perseverance” and the red “valor,” which she would keep.

The “I Try” singer noted the current 50-star flag was designed by a high school student in the late 1950s, soon before Hawaii and Alaska became states. 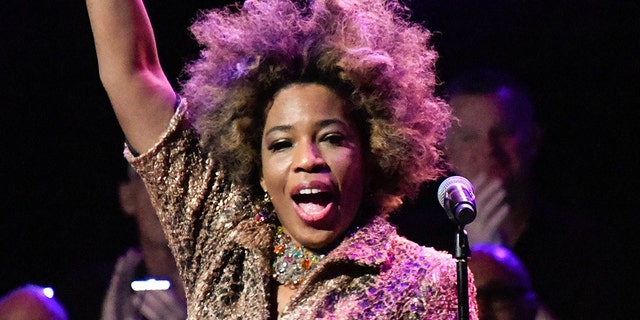 “Sixty-two years later, in 2021, we have changed and it’s time for a reset, a transformation,” she concluded. “One that represents all states and all of us.”

“It’s time for a reset, a transformation. One that represents all states and all of us.”

It didn’t take long for conservatives to fire back.

Jenna Ellis, who served as an attorney for former President Trump, tweeted, “I don’t like to brag, but we’re kinda proud of that ragged old flag.”

“@MacyGraysLife had one hit song about 20 years ago and hasn’t done anything since,” Republican Lavern Spicer, who ran for Congress in Florida last year, wrote. “Now she wants to come out from the dark and say that she hates our flag. Your world would crumble if you weren’t in America.”

“@MacyGraysLife had one hit song about 20 years ago and hasn’t done anything since.”

Gray has been an active supporter of progressive causes for years. Before the 2020 election, she performed in an “I Will Vote” concert to raise money for Biden.