For a few weeks last year (or was it the year before? I really can’t remember, it’s all a Covid blur), Netflix’s Call My Agent! was the show to drop into conversation as shorthand for, ‘Aren’t I cool and hip and generally happening?’

It wasn’t just that it was French and set in Paris, it also satirised the world of showbusiness in the most deliciously wicked and witty way, all while looking stylish in a pair of metaphorical cigarette pants.

Ten Percent is the British remake. Same characters, same plotlines – only set in London, ‘à la rosbif’. Appropriately, the wardrobe is less sharp, as are the cheekbones. 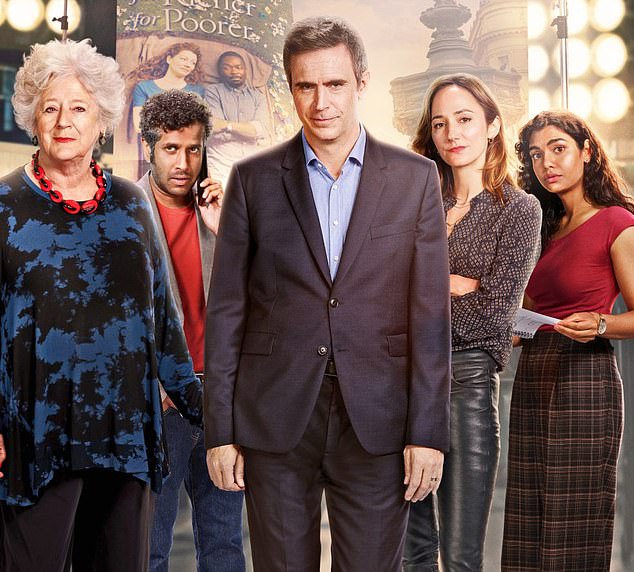 Jack Davenport (centre) as Jonathan with Maggie Steed (far left) as Stella. Sarah Vine says while the storylines and characters in Ten Percent may be familiar to fans of Call My Agent!, the tone and execution are very different

Prasanna Puwanarajah is the unfortunate Dan, who spends most of the first episode hiding from his client, Kelly Macdonald. Yes, the Kelly Macdonald, playing an actress whose blockbuster role is scuppered when she refuses to have ‘work’ done on her face.

There are other cameos too, including David Oyelowo and Dominic West, and Helena Bonham Carter and Olivia Williams as two stars pitched against each other for a role.

But while the storylines and characters may be familiar to fans of Call My Agent!, the tone and execution are very different.

There’s a wonderful character called Simon Gould, a washed-up alcoholic actor played with agonising authenticity by Tim McInnerny, and Maggie Steed’s wise veteran Stella Hart – the other half of Nightingale Hart, usually shadowed by hound Mathias – is 100 per cent old-school Bloomsbury, the sort of grande dame who couldn’t exist anywhere but the drinking dens of old Soho and Mayfair. 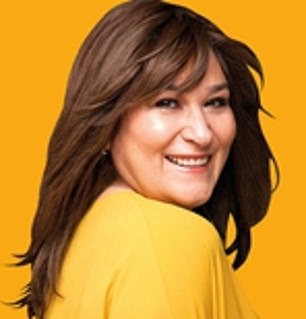 But what gives it that unmistakable Britishness is the writing: it springs from the pen of John Morton, who created the brilliant BBC satire W1A which, like Fawlty Towers, seems to bear endless rewatching (at least it does in my house).

And there are plenty of echoes here, from the opening scene in which Dan gets the bad news about his client while cycling through London, to the ‘Yes, no, yes’ of Jonathan’s terrified assistant and the coolness of her more confident colleagues.

But if that were all it would not be enough. What make this remake a success are the performances – the cast are without exception impressive (especially Davenport, who by the end of episode one succeeds in making the viewer sympathetic towards a deeply flawed character) – and the human stories beneath the satire.

The emptiness, the ambition, the loneliness, the fear of failure: these are universal human themes which stand alone in any drama. Here they are that bit more interesting thanks to the combination of stellar casting and sharp writing.

As with the American version of The Office (which was such a huge hit), the framework is the same as Call My Agent!, but the execution is uniquely British.

This troubled cop swept me along 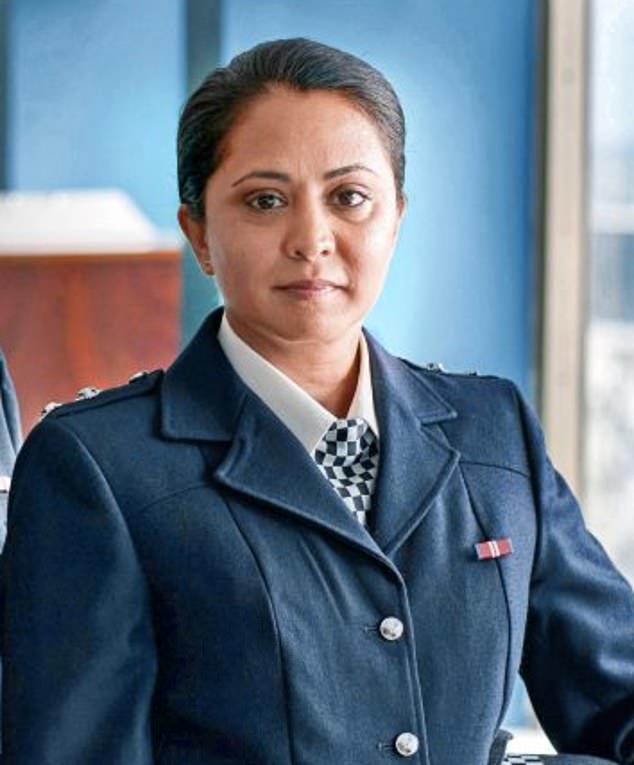 Sarah says that Parminder Nagra (pictured) carries ITV’s DI Ray. which is littered with cliches and is heavy-handed in parts

As a general fan of cop shows, I found myself swept along by this one even though it’s littered with clichés and rather heavy-handed in parts. It stars Parminder Nagra, whom we haven’t seen very much of since Bend It Like Beckham, which is a shame because she really carries this.

The writer is Maya Sondhi, who played PC Maneet Bindra in Line Of Duty, and there is a clear agenda here to do with raising awareness around issues of race and, in particular, the idea of unconscious bias.

The show makes this abundantly clear from the start, when Nagra’s character, picking up groceries in a local store, is approached by an elderly white man wanting to know where the eggs are. The assumption is, of course, that she works there.

She then goes on to stop a young Asian man wielding a knife, who everyone initially assumes is a terrorist but who in fact is just mentally ill. Again, more lazy assumptions.

This lends Nagra’s character an air of permanent discomfort, which at first grates a bit; but as the story moves on it begins to make dramatic sense in a way that adds an interesting psychological dimension to the age-old trope of the troubled cop.

If only this level of nuance was extended to the other characters in the show who – from the pushy supervising officer to the chippy subordinates – are, I’m afraid, almost insultingly clichéd. 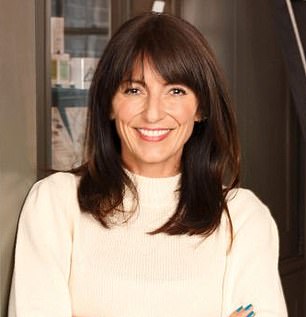 Davina McCall’s (pictured) Davina McCall: Sex, Mind And The Menopause feels timely in a week when shortages of HRT drugs hit the headlines

A topic close to my heart

In a week when shortages of HRT drugs hit the headlines, Davina McCall: Sex, Mind And The Menopause (Mon, Ch4) felt timely. McCall is a great champion of sensitive causes as she has a capacity for empathy combined with a steely professionalism.

A variety of talking heads unpacking misconceptions about this time in women’s lives didn’t make for the most thrilling TV, but as a piece of public broadcasting on a topic close to my heart I can’t fault it.