Home » Celebrities » Rod Stewart’s Kids: Everything To Know About His 8 Children & Their Mothers Rod Stewart’s Kids: Everything To Know About His 8 Children & Their Mothers

Rod Stewart has eight children with various partners. Here is everything to know about the British rocker’s kids.

Rod Stewart, 76, is a legendary British rocker known for hit tracks like “Maggie May,” “Sailing,” and “Da Ya Think I’m Sexy?” Off the stage, the Grammy winner is a father to eight children, who he’s welcomed with five different partners. While Rod seems to have a close bond with his youngest children, he didn’t get to spend as much time with his older kids due to his hectic career. “I was in debt to the IRS in the late 70s. I had to go and do a lot of touring, so I didn’t see them,” Rod said on Ireland’s The Late Late Show in March 2019.

Below is everything you need to know about Rod Stewart’s eight kids. 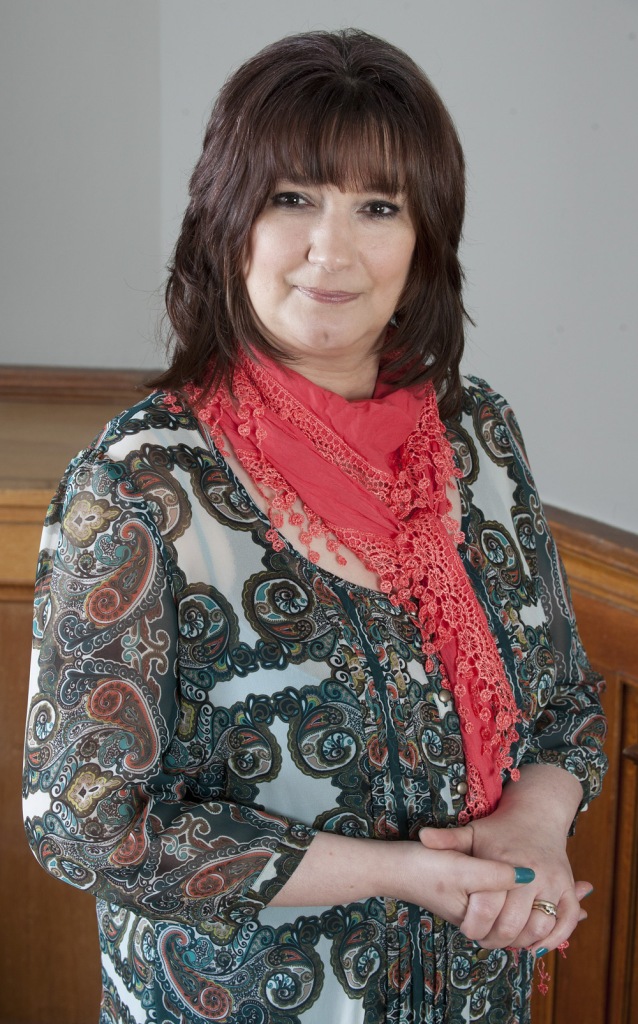 Rod welcomed his eldest child, Sarah Streeter, 57, with girlfriend Susannah Boffey on November 6, 1963. Rod was only 17 years old at the time of Sarah’s birthday, and he and Susannah decided to place Sarah up for adoption. Sarah was raised by her adoptive parents, Gerald and Evelyn Thubron.

Sarah had no relationship with her father until 2007, after her adoptive parents passed away. A few years after they reconnected, Rod opened up in an interview with Piers Morgan about his regret in giving up his first child. “I feel guilty about everything. I carry lots of guilt,” he said in 2011. But Sarah eventually learned to forgive her father, and told The Daily Mail in 2018 that their relationship strengthened. “It has become much more relax and now he’s just ‘Dad’ to me,” she told the publication. “I feel like I am a genuine part of his extended family, which is wonderful.” 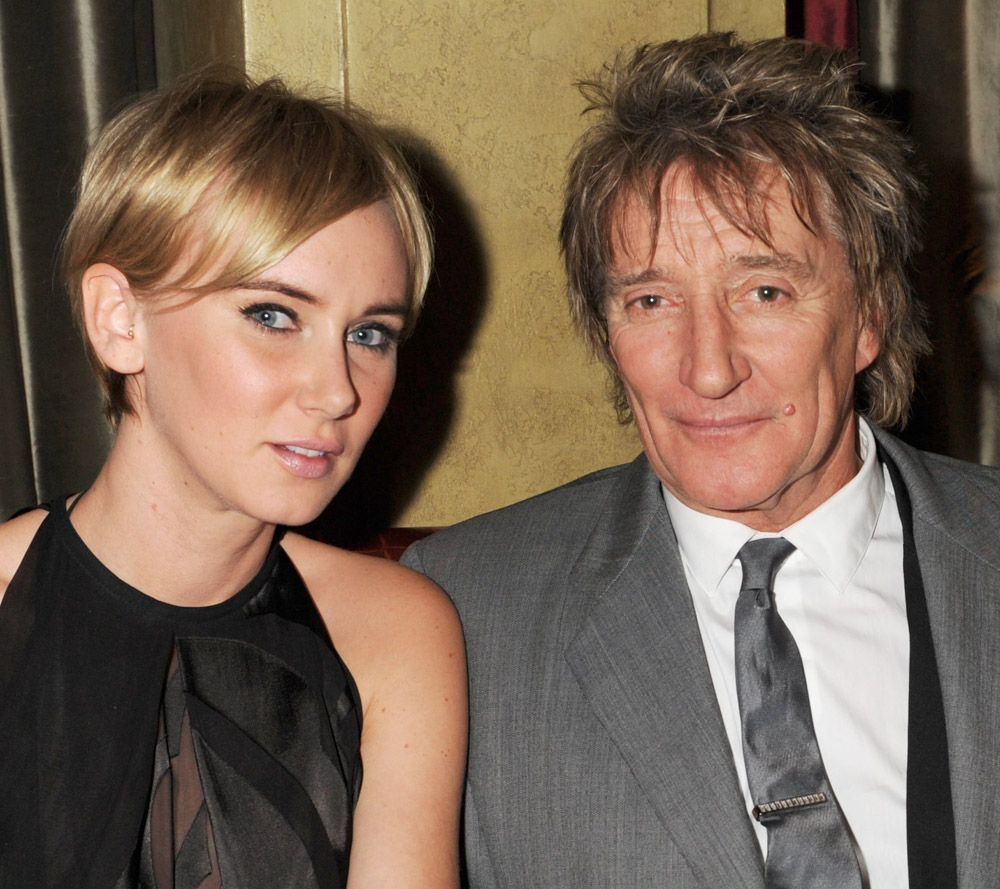 Kimberly Stewart, 42, is Rod’s second child overall and his first child with his first wife, model and actress Alana Stewart, 76. Kimberly was born on August 21, 1979, and she was raised jointly by her parents until they split in 1984. Kimberly is mostly known for her ventures in fashion, having appeared on the covers and in photo spreads for outlets like Tatler, German Vanity Fair, American Vogue, Italian Vogue, Elle, and InStyle, among many others. In January 2021, she started a luxury organization company called The Realm By Kimberly Stewart. She’s also acted on a few occasions.

Kimberly has one child, daughter Delilah Genoveva, whom she welcomed on August 21, 2011 with actor Benicio del Toro. Delilah was Rod’s first grandchild. 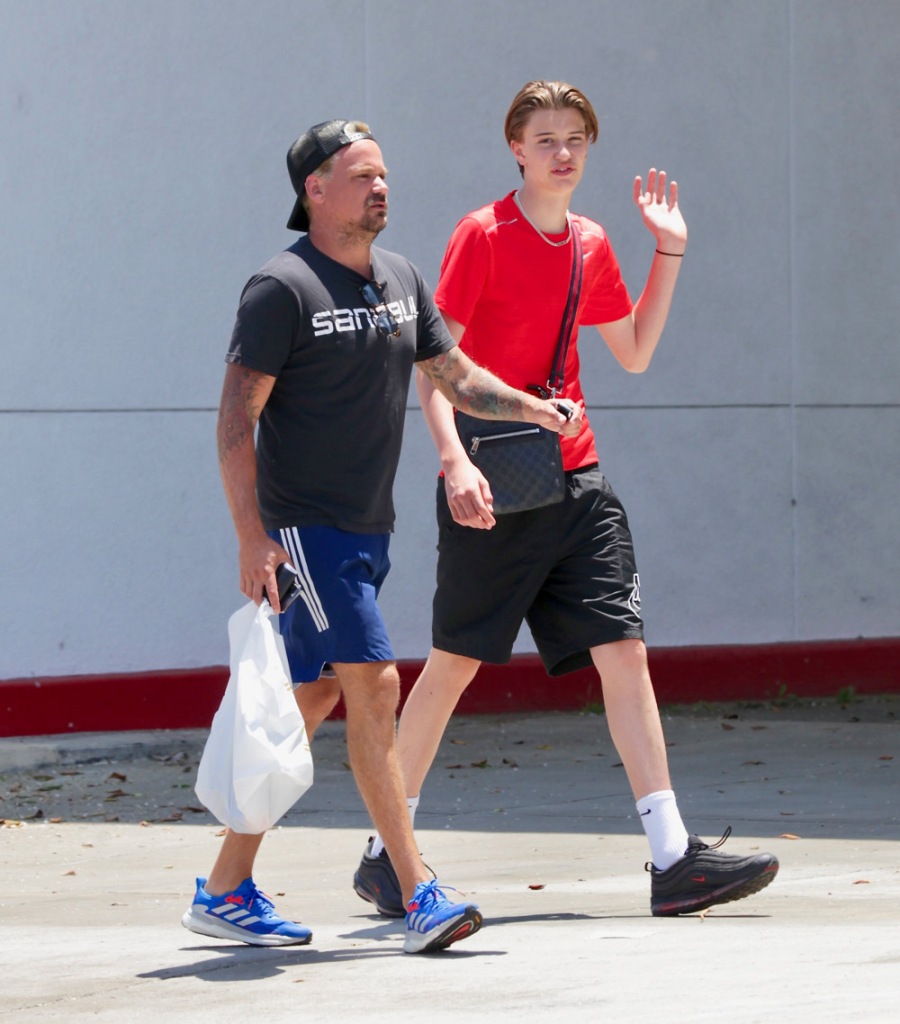 Rod’s eldest son, Sean Stewart, 41, was born to the rocker and Alana on September 1, 1980. Sean is a musician just like his father, and is most well-known for appearing on the A&E Network reality TV series Sons of Hollywood in 2007. The series followed Sean, Randy Spelling, son of Aaron Spelling, and agent David Weintraub as they navigated life in Hollywood. Sean previously dated RHOBH alum Adrienne Maloof in 2013, and most recently was romantically linked to The Hills star Audriana Patridge. 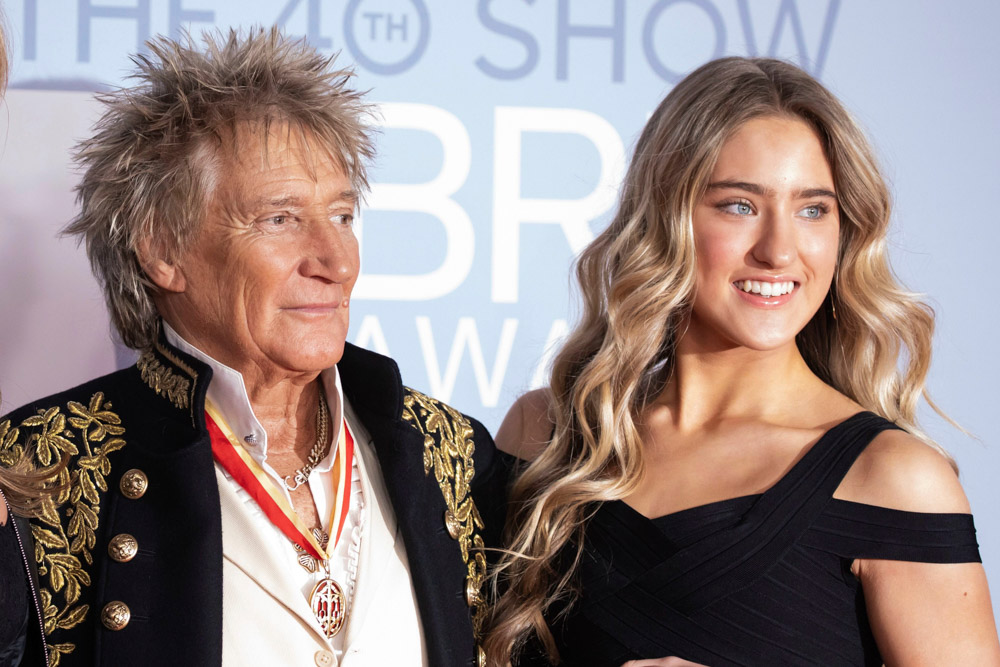 Rod welcomed his fourth child, daughter Ruby Stewart, 34, on June 17, 1987. Ruby is the daughter of Rod and model Kelly Emberg, who dated from 1983 to 1990. Ruby initially followed in her mother’s footsteps and became a fashion model, but then, like her father, she pursued music and started her own band, Revoltaire. The group disbanded in 2012, and Ruby then formed a country duo called The Sisterhood with singer Alyssa Bonagura. 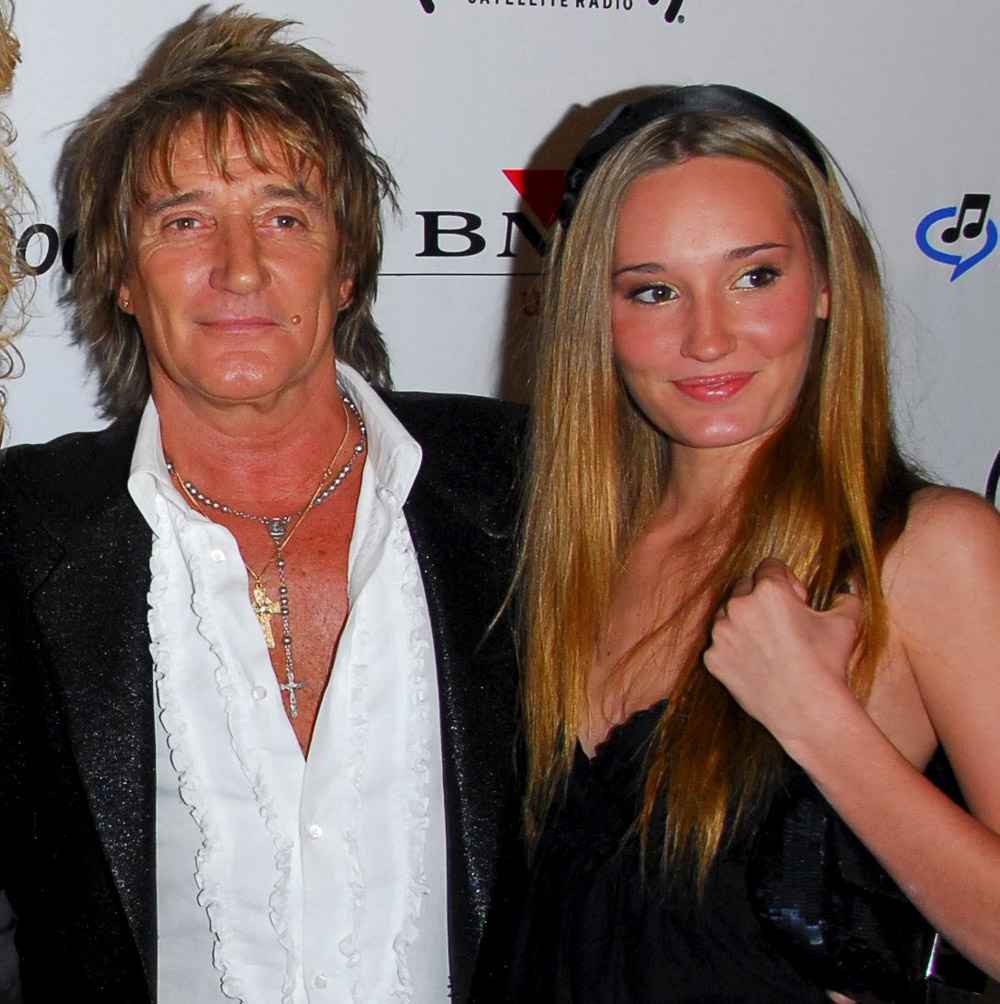 Renee Cecili Stewart, 29, is the eldest child from Rod’s marriage to New Zealand model Rachel Hunter, and was born on June 1, 1992. Renee is currently a dancer and a yoga and meditation teacher, according to her Instagram page. Her website says that she studied at the London Contemporary Dance School for three years, and then began working as a freelance Dance artist. 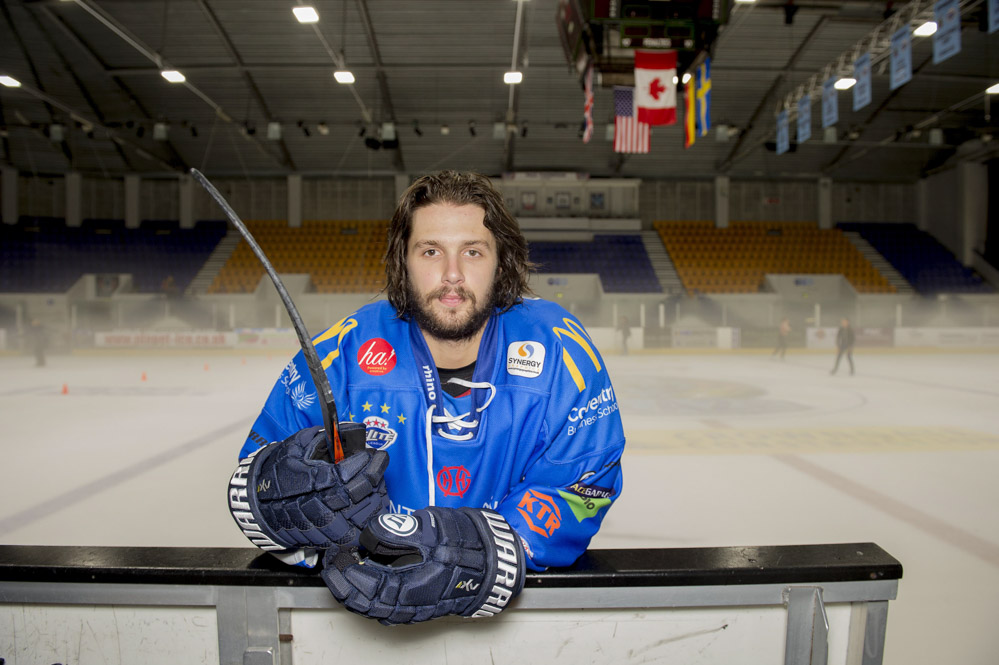 Rod welcomed his sixth child on September 5, 1994 when Rachel gave birth to their second kid together, son Liam McAlister Stewart, 26. Liam grew up in California and played hockey in high school. After graduating, he played for the Spokane Chiefs of the Western Hockey League for four years, and then played in the Elite Ice Hockey League with the Coventry Blaze and Guildford Flames. Liam most recently played for a professional team in New Zealand.

Rod’s seventh child, Alastair Wallace Stewart, 15, was born in November 2005. Alastair’s mother is English model Penny Lancaster-Stewart, 50, whom Rod has been married to since 2007. Alastair is mostly out of the spotlight, though it’s been reported that he’s super into swimming and has even won a bunch of swim races. In 2017, The Sun reported that Rod planned to build a large swimming pool at his U.K. mansion to help Alastair train for the Olympics. 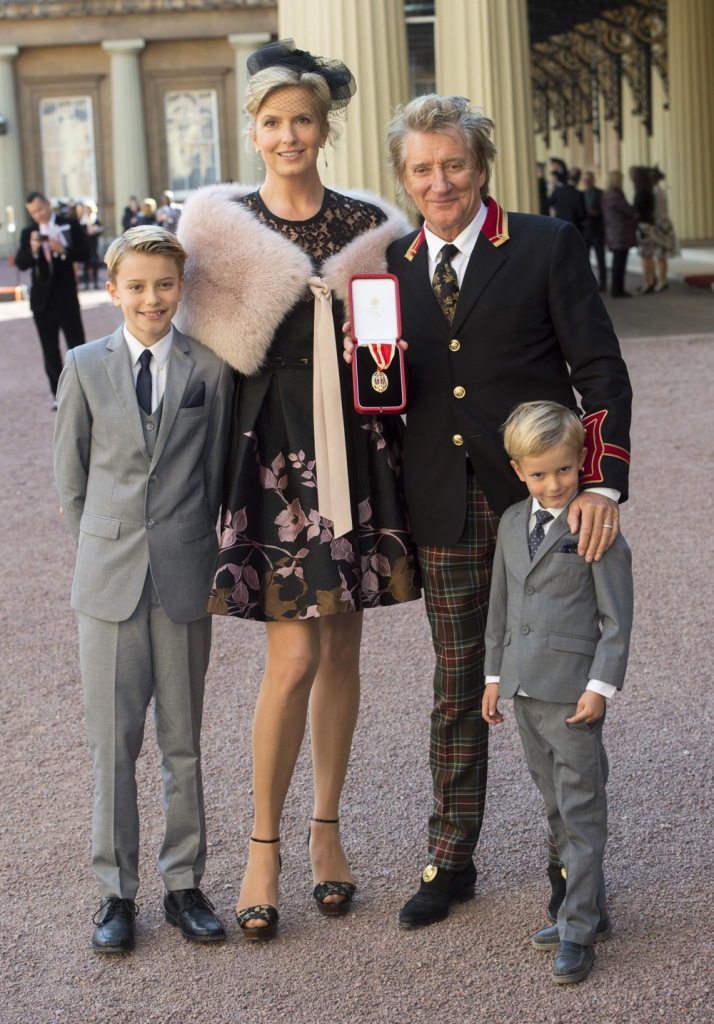 Aiden Patrick Stewart, 10, is Rod’s youngest kid. Penny gave birth to Aiden in February 2011. Penny had gone through several rounds of IVF before she eventually got pregnant, and so when Aiden arrived, Rod called him the couple’s “miracle baby,” according to reports. Since he’s only a decade old, Aiden hasn’t yet taken up any particularly talents or interests. But if he’s anything like his father and siblings, he’ll surely be a star in his own right.