‘The heaviest pain in the world’: Rob Delaney says ‘grief drove a bus through part of my brain’ after the death of his son Henry in a heartbreakingly poignant book extract

Catastrophe star Rob Delaney has said hearing that his son had a brain tumour was the ‘heaviest pain in the world’.

In his new book A Heart That Works, the American comedian, 45, shared the heartbreaking detail behind his late son Henry’s death, who died aged just two-and-a-half on Rob’s 41st birthday in January 2018.

An extract published in the Sunday Times provided harrowing recounts of the difficult period for him and his wife Leah who struggled to come to terms with their loss. 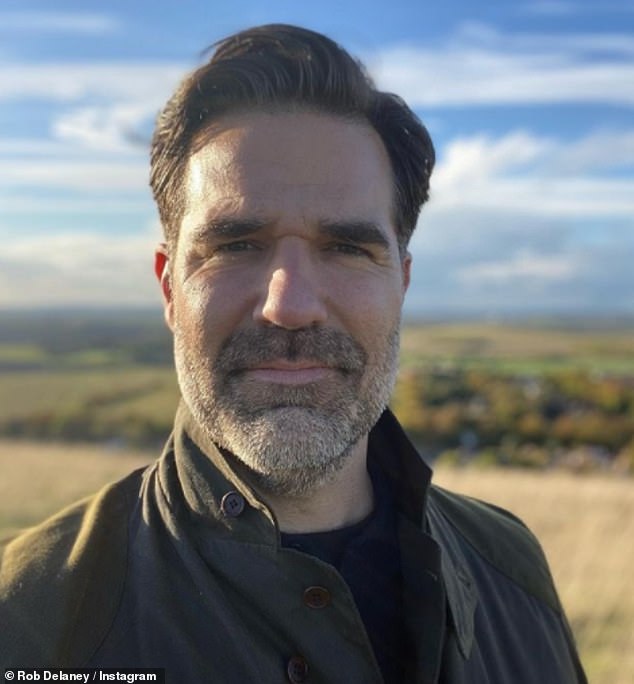 Opening up: Catastrophe star Rob Delaney has said hearing that his son had a brain tumour was the ‘heaviest pain in the world’

It was only the day after he Sharon Horgan won a BAFTA for comedy writing on Catastrophe in April 2016 that he and Leah were told that little Henry might have a brain tumour.

He described that period of time – despite it being the height of his success so far – and the months that followed, to be ‘obscured by fog’.

‘Grief drove a bus through the part of my brain where memories are stored,’ he said. ‘After the MRI, Dr Anson confirmed that Henry had a large tumour in the back of his head, near his brain stem.

‘He delivered the news calmly, and ended by saying a paediatric brain surgeon would come to see us within a few hours. We sank inside ourselves. 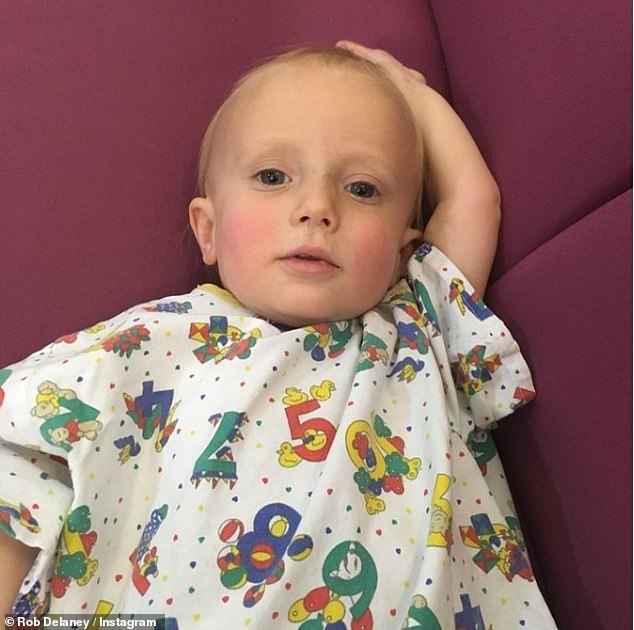 Heartbreaking: In his new book A Heart That Works, the American comedian shared the detail behind his late son Henry’s (pictured) death, who died aged just two-and-a-half

‘The heaviest pain in the world. I felt like I had suddenly quadrupled in weight, and an oily, black whirlpool began to swirl where my heart had been.’

The 45-year-old went on to explain how they were introduced to a brain surgeon at Great Ormond Street Hospital who were going to try and surgically remove the tumour.

Little Henry had only turned one less than two weeks before.

When they arrived at the hospital days before the surgery, parents Rob and Leah shared a shower room with one-year-old Henry, who dad Rob describes as having a fatigued appearance that ‘you would normally associate with an old man’. 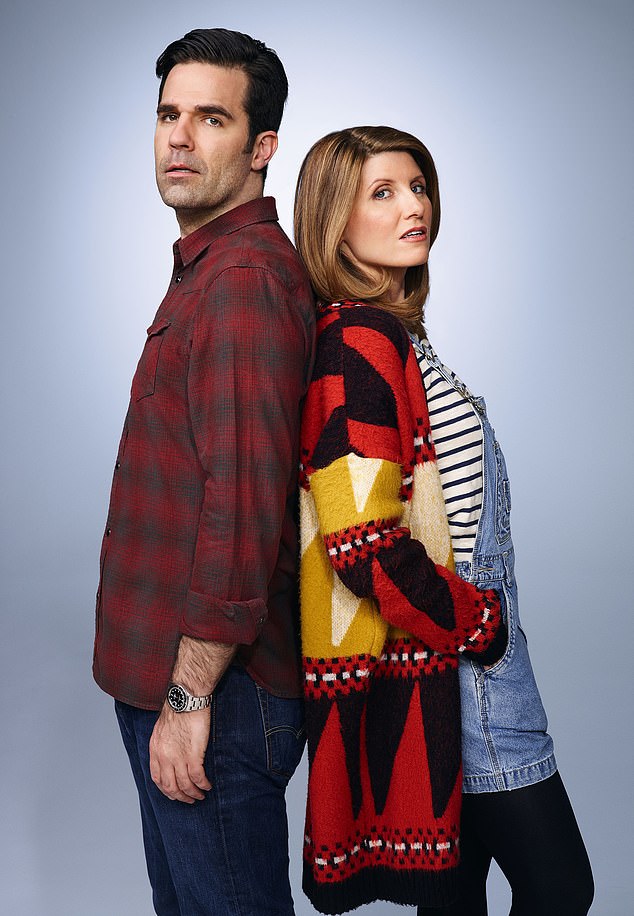 To stay close to their little one as doctors prepared him for his operation, the couple of 18 years got a hotel room nearby – and he divulged that the pair had sex twice within a few hours during the ‘scary’ period.

He said he wanted to share that detail in his book because parents experiencing the same thing might feel guilty and ‘hyperventilating with anxiety’.

Their fear and horror of what was happening just over the road ‘manifested in sex’ – ‘even at the worst of times’, he said, adding that they just wanted to be so close.

After two months in the intensive care unit, Henry was moved to the cancer ward where he received chemotherapy for several months.

And while this was going on, the couple made an ‘active decision’ to protect their marriage by going on a date once a week even if Henry was in intensive care. 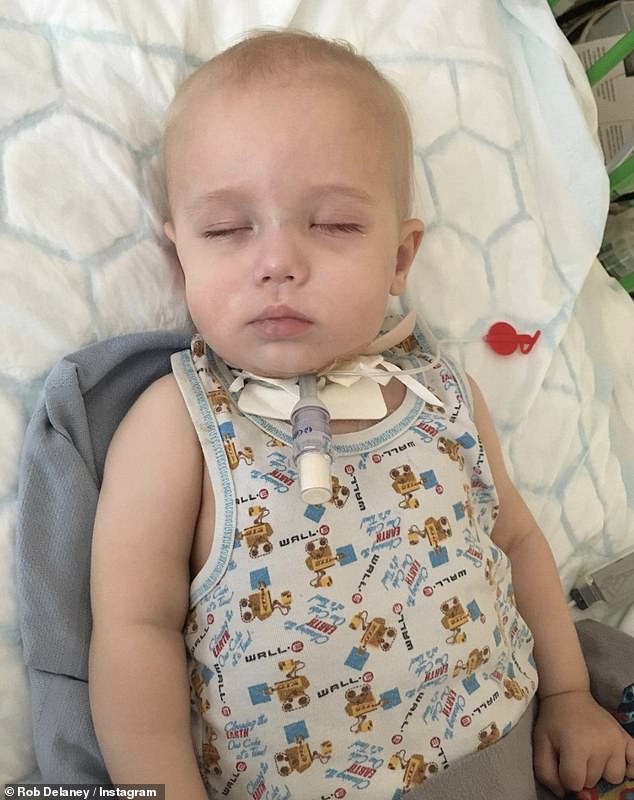 Heartbreaking: On Friday, Rob Delaney, 44, took to Instagram to share a photograph of his late son Henry sleeping, taken when he was only 15 months old and had just started chemotherapy 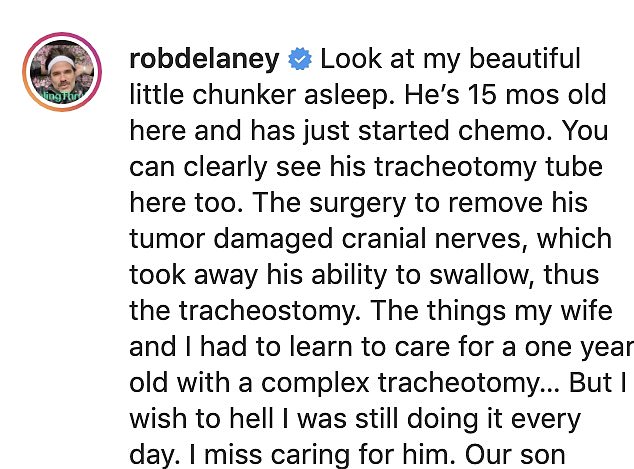 Devastating: In a heartbreaking caption, the Catastrophe star explained how cancer surgery had damaged cranial nerves and left their son unable to swallow – Henry died three years ago

Months spent at home were great for the family, Rob explained, but it all came to a horrible halt once again when at a check-up following an MRI scan revealed that the cancer started to return.

He said his ‘stomach filled with stones’ as he and Leah understood there could be no more treatment after this point.

Henry was then expected to live for another three to six months.

In April last year, the actor paid tribute to his late son Henry shortly after acknowledging what would have been his sixth birthday.

And Rob, a parent to three other sons with wife Leah, admitted he still doesn’t know how he continues to function after being forced to endure the heartbreaking loss of a child.

Sharing an image of Henry as a baby with Instagram followers, he wrote: This little boy would’ve turned 6 the other day. He died of cancer a little bit before his third birthday.

‘If you asked me how I carry on without him I would tell you I don’t know.’

The American star has previously admitted to cherishing the time he spends with his three other sons more than ever following Henry’s death, and that he is no longer afraid of dying.

Speaking to BBC Radio 4, Rob shared his feelings on his grief and own mortality when asked about his ‘Moment of Light’ – which he revealed was thinking about his own death which gave him peace.

He said: ‘When I heard people were sharing so called moments of light on Radio 4, I got angry. 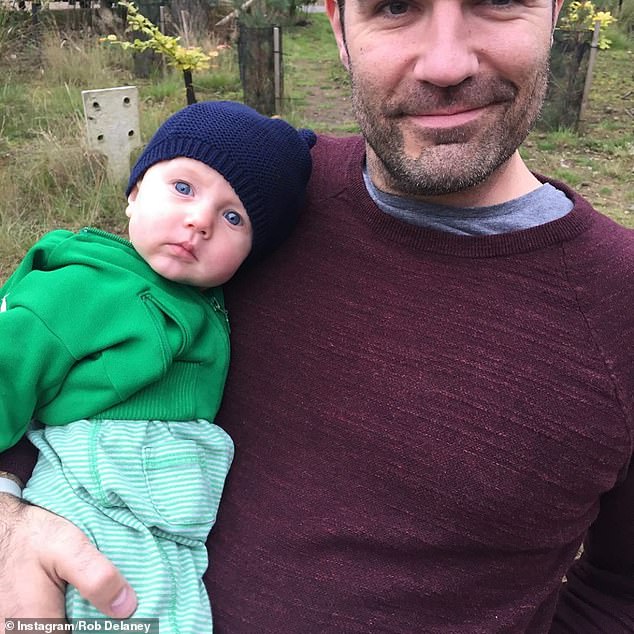 Devastating:  Rob revealed Henry was diagnosed with his brain tumour in 2016 after suffering persistent vomiting and weight loss, shortly after he turned one

‘How dare they. A historic pandemic and its mismanagement by the government is killing people by the thousands…

‘I got so angry, I needed a moment of light myself, so I began to think about my own death. I think about dying a lot and it always makes me feel good. Like many people I used to be afraid of dying.

‘But a little less than three years ago, our then-youngest son Henry died of a brain tumour. It so happens he died on the morning of my 41st birthday.

‘Thus, that date’s significance has been exchanged for something far larger and more powerful.

‘I don’t know where Henry went or what happened to him when he died, do you? But I know I’ll get to find out when I die.

‘At the very least I’ll get to experience something Henry experienced and that’s wonderful. That knowledge brings me peace. I won’t say I can’t wait because I can.’ 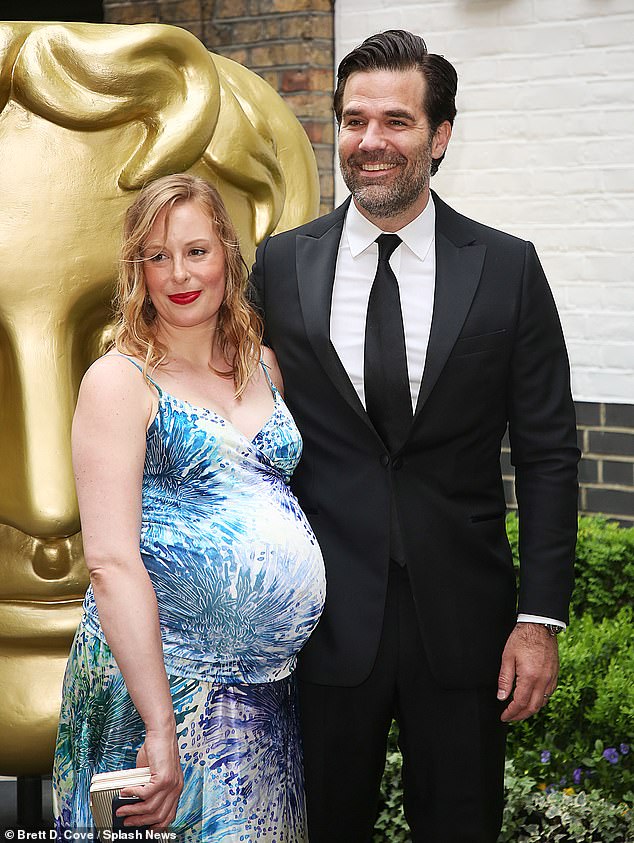 Happy news: In December 2018 Rob revealed his wife Leah had given birth to their ‘magical’ fourth son that August, seven months after Henry passed away (pictured in 2018)