All eyes were on the Cambridge children as they made their carriage debut at the Trooping the Colour for the Queen‘s Platinum Jubilee celebrations.

Following their appearance at the grand parade, Prince George, Princess Charlotte and little Prince Louis travelled to the Major General’s Office to watch the rest of the spectacle, along with their mother, the Duchess of Cambridge.

WATCH: The Cambridge children bow their heads during Trooping the Colour

The young Cambridge children were seen peering out of the large windows as they enjoyed the military parade.

And there was one very sweet moment that went largely unseen. Prince Louis, four, was seen leaning slightly out of the window and saluting the Irish Guards as they continued to parade.

Moments earlier, the Cambridges had been greeted with huge cheers from the crowds as they made their carriage debut with mum Kate and the Duchess of Cornwall.

Prince George, Princess Charlotte and Prince Louis, all dressed in a light blue, navy and white colour scheme, have taken part in the annual event before – just not in this capacity. 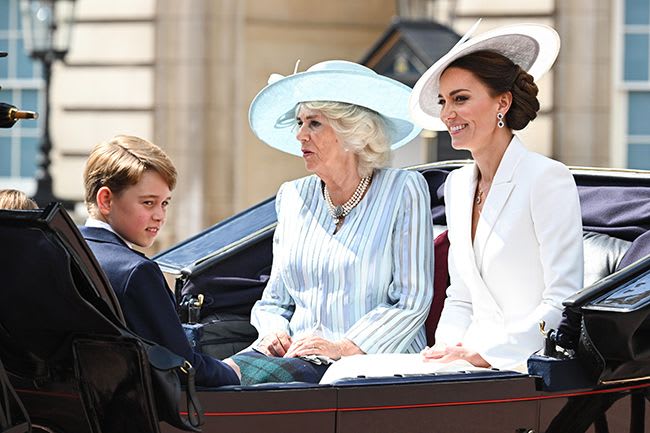 In previous years they have only appeared with their parents on the Buckingham Palace balcony to wave at crowds and watch the RAF flypast.

The young Cambridges and the Duchesses’ carriage, known as a barouche, was followed by another carrying the Earl and Countess of Wessex and their children, Lady Louise Mountbatten Windsor and Viscount Severn.

The Duke and Duchess of Gloucester and the Princess Royal’s husband Vice Admiral Sir Tim Laurence processed in the final carriage.

On horseback at the rear in their uniforms were the Prince of Wales, the Duke of Cambridge and the Princess Royal, resplendent in their military regalia – including their new Platinum Jubilee medals.

Following the parade, the Cambridges will appear all together on the balcony on Buckingham Palace with the Queen and other senior members of the royal family, including Prince Charles, the Duchess of Cornwall and the Earl and Countess of Wessex.