A show about gangsters with razors in their caps, Peaky Blinders has never been one for the faint of heart.

But even star Helen McCrory admits she had to watch the ‘disgustingly violent’ new series through her fingers.

Actress Miss McCrory, who plays aunt Polly, warned viewers to expect ‘disturbing’ scenes when the show returns to BBC One at the end of the month. 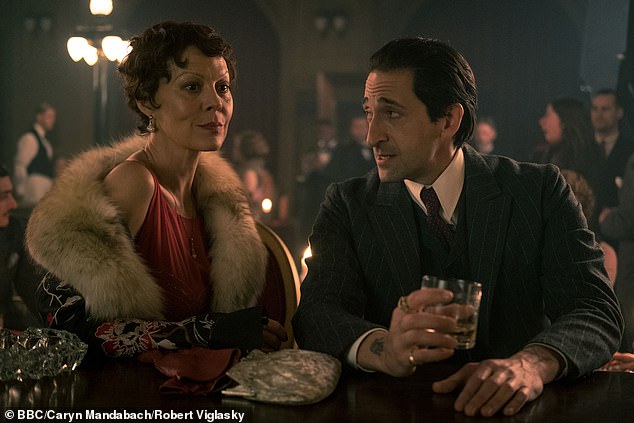 Aunt Polly Gray played by Helen McCrory (left) and Luca Changretta played by Adrien Brody. McCrory admited she had to watch the ‘disgustingly violent’ new series through her fingers

But the 50-year-old said she is not worried the gangster drama, set in Birmingham after the First World War, risks glamorising violence.

Asked if the show could normalise brutality among young viewers, she said: ‘No. It is very violent and really horrible.

I look away from the screen. I, as Helen, can’t watch it. I think it’s disgustingly violent. But it is. And it should be.’

She explained the programme at least shows violent criminals, such as Cillian Murphy’s ringleader Tommy Shelby, cannot escape the consequences of their actions, adding: ‘Anybody who looks at the violence of Peaky Blinders and thinks “that is exactly what I want to do”… I mean, that’s sick.