PARIS — A crystal ball prediction: The real money in the future of fashion will be spectacles and theme parks.

Tyra Banks had it right. Like “America’s Next Top Model,” Ms. Banks’s widely syndicated and entirely unrealistic game show, her proposed new attraction Modelland appears to be a logical next step in an evolution that Mark McCormack, a lawyer and sports agent, foresaw when he acquired a stake in the global fashion week franchise and brought it into the fold of his mega-agency, IMG.

Mr. McCormack understood early that the image language of fashion, like that of sport, comprises a largely wordless narrative running in a never-ending loop. He died before the advent of Instagram, but his intuition about fashion anticipated by some decades the amplifying effect social media would have on a simple evolutionary precept. Humans are hard-wired to seek beauty in others of our species.

How else to account for the fact that models are compelling to watch even when doing little more than walking around in circles? As much as anything else, fashion shows are about that fact.

Sure, people outside the industry care about clothes. Yet, at a guess, it was not on the basis of Olivier Rousteing’s glittering glad rags that thousands clamored for tickets to last week’s Balmain men’s wear show, held on the long night of the summer solstice in the Jardin des Plantes. 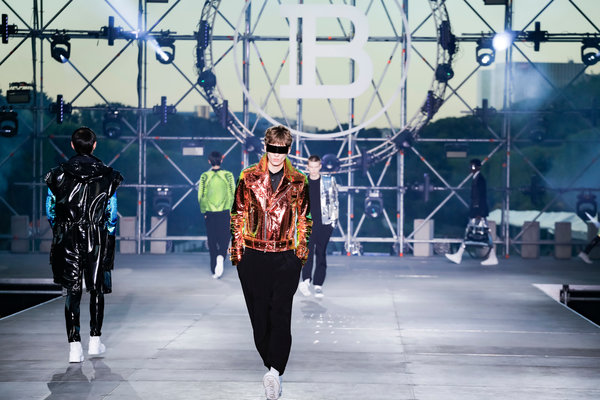 The free show, concert and D.J. set was a benefit with proceeds — generated by food and drinks concessions — directed to (RED), the Bono charity dedicated to eliminating H.I.V. and AIDS.

It was also a raucous demonstration of the entertainment value of fashion shows, a reality Karl Lagerfeld cottoned to early and pursued aggressively with the increasingly over-the-top spectacles he staged for Chanel.

The use of those Chanel shows, with their cruise ships, supermarkets, beaches and icebergs installed inside the Grand Palais in central Paris, was broad-based brand promotion, but the events themselves remained invitation only. Increasingly, though, the big fashion houses have mounted shows that read as extravaganzas.

The Dior haute couture show in January was a circus, literally, with a troupe of female acrobats. Mr. Rousteing’s alfresco men’s (and women’s) show was a kind of glam rock Woodstock.

The Celine show that closed Paris Fashion Week with a fantastic display of duds for scrawny rockers designed by Hedi Slimane (and shown on models that looked like the love children of Buster Poindexter and Dee Dee Ramone) was held in a dark pavilion constructed at great cost for the occasion on the grounds of Les Invalides.

It seemed a pity having to file out into the Parisian night after a mere 10 minutes. Where was the rave?

Given a steady and progressive shift away from fashion shows pitched toward industry insiders, it seems only logical that eventually their vaunted exclusivity will disappear. The velvet ropes will come down. The houses will charge admission. Drinks tickets will be sold alongside the T-shirts and key chains that (fashion’s dirty little secret) are where the real profits lie.

Why not? “At least if it all becomes a theme park, we can ride trams between shows,” Josh Peskowitz, the men’s fashion director of Moda Operandi, a luxury e-commerce platform, said at a show Sunday morning on the outskirts of Paris. “And not worry about this horrible traffic.”

If fashion shows sometimes fail to cohere, they almost always produce some moment of unexpected delight. Take Hermès. For a second time a characteristically subtle and refined Hermès show was held in the courtyard of the Mobilier National, France’s national furniture warehouse.

In January, the presentation was indoors, but this time the 18th-century bergères, stiff Regency side chairs, plastic office seating from the 1960s had been moved into a courtyard, a ragtag assembly of furniture arrayed like guests at an unlikely cocktail party.

The variety of the chairs served as a reminder of what Vogue.com called “the scale and depth of human design ingenuity,” and the unsung genius of great craftsmanship applied to objects of simple function. Similarly, they underscored something applicable to the Hermès designer Véronique Nichanian, who consistently turns out some of the handsomest utilitarian clothing no ordinary mortal can possibly afford.

But never mind that. What stayed with this observer was not the easy reversible Windbreakers Ms. Nichanian designed for junior oligarchs to wear aboard their Embraer Phenom 100s, but a scrap of found poetry discovered in the show notes. The colors of Hermès spring 2020, it explained, are as follows:

Without doubt, the finest shows of the Paris season were those at GmbH and Sacai. True, Kim Jones at Dior demonstrated once again his cool mastery of the tailoring that has always been at the core of this most traditional of labels. Yes, Jun Takahashi at Undercover created sinisterly beautiful black suits with spider webs creased into their surfaces, as though making uniforms for a sect of stealth assassins.

Without doubt, what the designer Bruno Sialelli did by breathing life back into Lanvin with a nautically themed show held inside a public pool designed in 1933 was a welcome reprieve for a storied but wobbling label.

And, naturally, Rick Owens continued an always fascinating exploration of hybridity — of gender; of nationality (his show was titled “Tecuatl,” in reference to his maternal grandmother’s Mixtec heritage); of politics (some clothes were emblazoned with the Aztec Eagle logo of the United Farm Workers union, for which Mr. Owens’s father worked as a translator in the California courts (proceeds from the clothes, and from some related jewelry, will benefit the UFW); and of anatomical morphology in a transformative age of machines.

But those presentations were in a sense too considered and chilly. They happened and un-happened just as quickly, leaving little residue in memory. It turns out that to be successful fashion requires soul, of all things.

That, anyway, was an unmistakable takeaway from a show mounted by Benjamin Huseby and Serhat Isik of the Berlin label GmbH and built around the concept of superstitious and protective gestures.

The diversity fashion trumpets so loudly now (and that it took so long to get around to) has yet to include much representation from the Arab world. Accompanying the North African music playing at the GmbH show was a casting that ran heavily to models whose form of beauty is seldom seen on runways.

And if it is true that, in the hands of less sensitive designers, the hiring of Algerian, Moroccan and Tunisian models for a show with an evil-eye theme could be read as gimmicky and even racist, here that was not the case.

The slightly thickset bodies of certain male models — so unlike those of the usual Anglo starvelings — brought a dimension of solidity and sexy, cis-gendered masculinity to suits with hammered silk strapping, billowing full trousers and shirts patterned with a subtle allover pattern derived from the amulet known as a nazar.

At Sacai, Chitose Abe riffed on the remixes that are her stock in trade, clothes whose unalike elements she fuses masterfully. An MA-1 vest was worn over an inside-out jacket. A tuxedo shirt and pants were made over into a dress. (Like many designers, Ms. Abe showed clothes for people of both conventional genders.) A sweater with a knitted Aran Island pattern on the front became a tennis cardigan on the back.

Of all the nutty pairings, perhaps the tastiest was the idea of putting these sophisticated garments over T-shirts adorned with quotations from the cult Coen brothers film “The Big Lebowski.” Like those nazars at GmbH, the quotes Ms. Abe selected from Jeff Bridges’s classic SoCal stoner, the Dude, appeared to have been selected for their ability to deflect bad vibes.

You didn’t like the collection? So what? As the Dude would say: “Yeah, well that’s your opinion, then.”

‘The Chambermaid’ Review: Amid Luxury, an Entrancing Drudgery