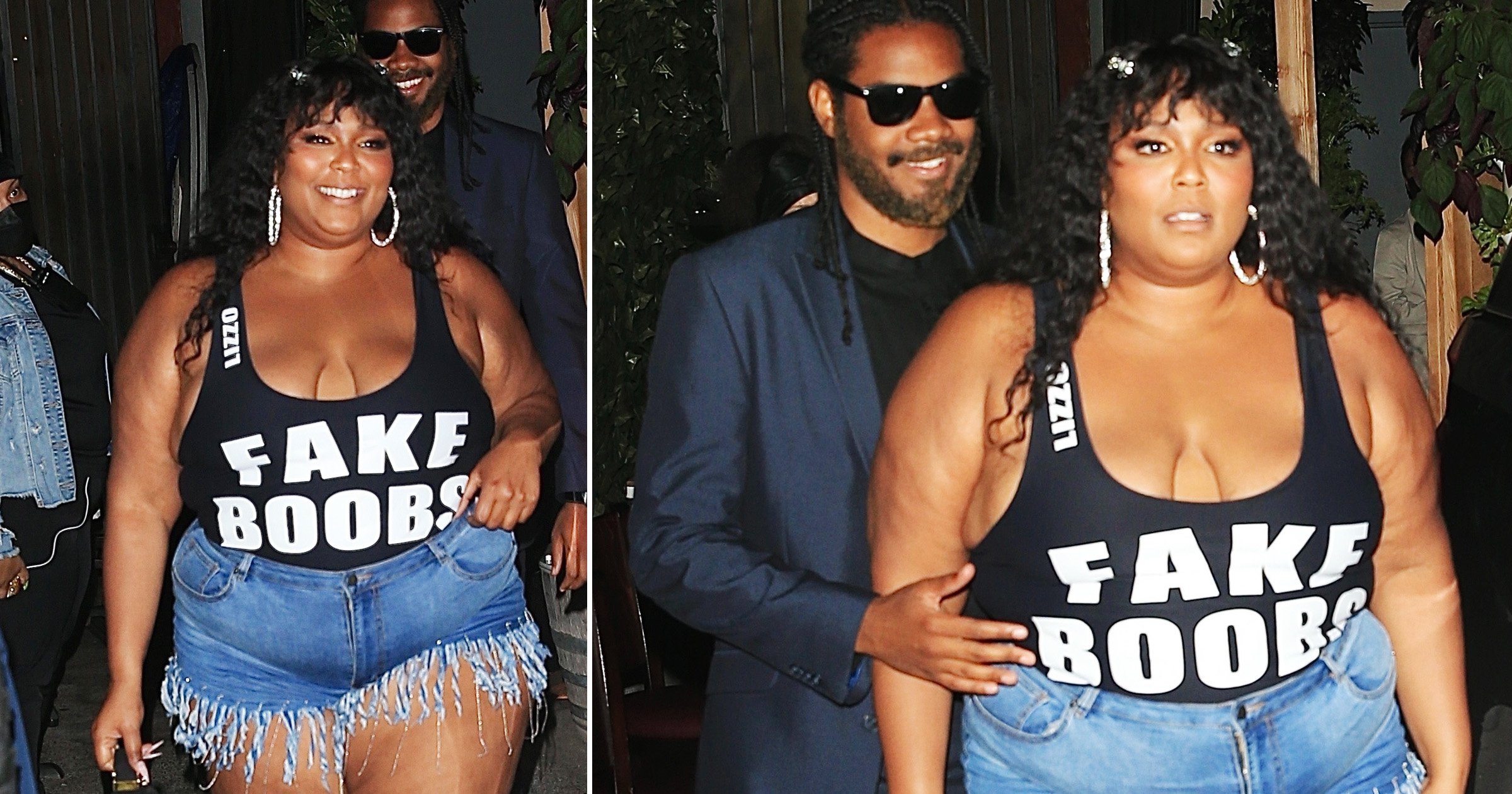 Lizzo was looking her usual fierce self out in Hollywood on Monday as she celebrated her highest US chart debut to date with Rumors.

In a black strappy bodysuit emblazoned with the words ‘fake boobs’, fringed denim hotpants and blingy hoop earrings, the 33-year-old looked (yes I’m going to say it) good as hell as she stepped out on a dinner date with a mystery man at celebrity hotspot Craig’s in West Hollywood.

Beaming broadly as she was spotted at the entrance, the star’s personalised touches to her outfit could be seen, with the Truth Hurts singer displaying her name both on the strap of her bodysuit and the black diamante-engraved bag she was carrying.

Her equally smiley date, who stayed behind her before putting his arm protectively around her at one point, was dressed smartly in a blue suit, black shirt and shades.

The same day, Lizzo had taken to TikTok to celebrate her new track with Cardi B, Rumors, debuting at number four on the Billboard Hot 100.

Dancing around to the song in that very same ‘fake boobs’ bodysuit, Lizzo’s moves revealed a cheeky cutaway design at the back, as well as the words ‘fake a**’, confirming the item as a celebration of her new song with its reference to lyrics, ‘All the rumors are true, yeah / Fake a**, fake boobs, yeah’.

The return of the star’s characteristic upbeat attitude comes after she recently took to Instagram to reveal she had been subjected to ‘fatphobic and racist’ abuse from people over the single.

Lizzo, real name Melissa Jefferson, broke down in tears on her livestream and explained that her ‘tolerance was lower’ and she was ‘more sensitive’ when ‘working this hard’.

MY HIGHEST DEBUT EVER ON THE CHARTS!!!! THANK U @Cardi B AND EVERYONE WHO STREAMED RUMORS!!!!

She continued: ‘My patience is lower, I’m more sensitive and it gets to me.

‘I’m seeing negativity directed towards me in the weirdest way. People say s**t about me that just doesn’t even make sense.

‘It’s fatphobic, it’s racist and it’s hurtful. If you don’t like my music, cool, if you don’t like Rumors it’s all cool, but a lot of people don’t like because of the way I look and I’m like… Anyway I’m just having one of those days where I don’t have no time. I think I’m just overwhelmed.’

A number of celebrities rushed to Lizzo’s defence, including collaborator Cardi B, as well as Jameela Jamil, Chloe Bailey and Missy Elliott.

Facebook has since confirmed it has removed several comments on Lizzo’s account and on posts she shared on Instagram, which it also owns, that break the rules against hate speech and harassment, and will continue to review reports and take action.

Crushing on a Scorpio Woman? Read This Before You Ask Her Out