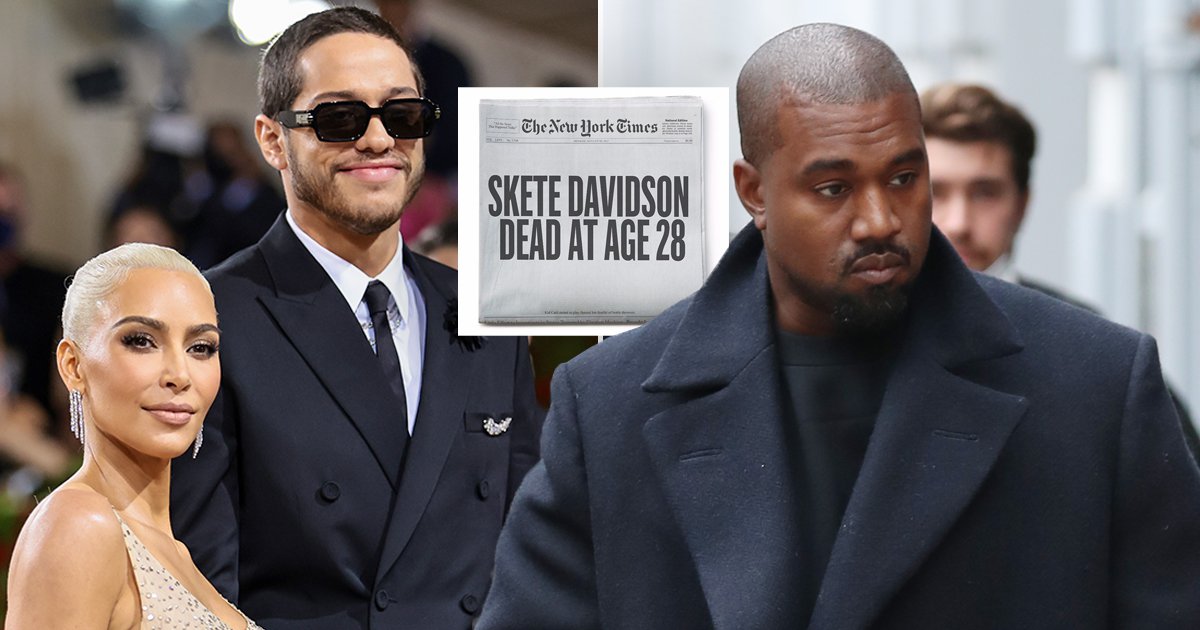 Kim Kardashian asked Kanye West to remove a bizarre post celebrating the end of her relationship with Pete Davidson, Metro.co.uk has learned.

The former couple called time on their romance last week after dating for nine months, but have yet to speak out over the reason behind their split.

The Gold Digger rapper left many shocked when he shared a new Instagram post following their split, declaring that the SNL comedian, who he refers to as Skete, was ‘dead’.

The dad-of-four, 45, posted a screenshot of a fake New York Times page with his 16.2million followers, with a headline reading: ‘Skete Davidson dead at age 28.’

‘Kid Cudi meant to play funeral but fearful of bottle throwers,’ a message at the bottom added.

While Kim has remained silent on social media, this is not said to be the case behind the scenes, as sources have said that she has vigorously defended Pete.

She has tried to get Kanye to delete the post in question as she still very much cares for the Set It Up actor.

Despite their split, it is thought that she will continue to defend him against her former partner.

Kim, 41, filed for divorce from Kanye, who she shares North, Saint, Chicago and Penelope with, last February, after six years of marriage.

She later went public with her romance with Pete Davidson, following their now infamous kiss on Saturday Night Live in October.

However, Ye was not happy with the pairing and made his disapproval known on Instagram, sharing explicit rants about the Set It Up actor and begging for the Skims businesswoman back.

He then mentioned beating Pete – who he referred to as Skete – in a song and attacked a cartoon likeness of him in a controversial music video.

After a public back-and-forth between the pair, the Grammy-winner deleted all the posts from his social media page and stepped out of the limelight, while Kete grew from strength to strength.

‘At this time, Ye is committed to a healthy co-parenting relationship with Kim and is focused on raising their beautiful children,’ his rep said at the time.

Things appeared to be friendly between the pair just last week as the mom-of-four joined their daughters, North and Chicago, to model a new Yeezy accessory in a photoshoot.

‘Kim and Kanye have been co-parenting very well as of late,’ a source told Us Weekly.

‘They are very civil with each other right now, there are no issues. They are both treating each other with mutual respect.’

Kim has yet to speak out over her ex-husband’s latest post, regarding her split from Pete.

The pair originally hit it off following her guest host stint on SNL, and she later revealed that she made the first move when the comedian skipped her after-party.

Despite being totally loved up, an insider has since claimed that their 13-year age difference and busy schedules eventually led to their whirlwind relationship coming to an end.

‘Pete is 28 and Kim is 41 – they are just in very different places at the moment,’ the source told Page Six.

‘Pete is totally spontaneous and impulsive and wants her to fly to New York, or wherever he is on a moment’s notice.

‘But Kim has four kids and it isn’t that easy. She needs to focus on the kids.’

Metro.co.uk has contacted Kim Kardashian’s reps for a comment.