Jim Carter: Me a national treasure? Nay, Im more of a trinket! 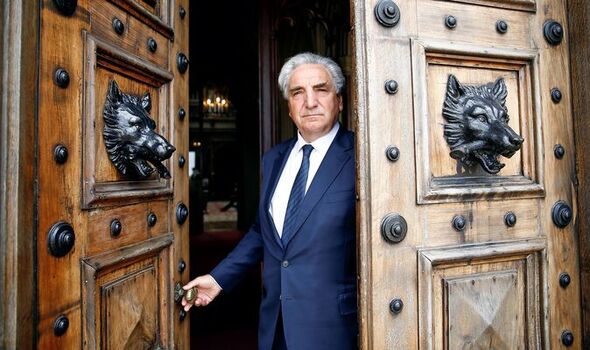 Jim Carter has been playing Downton Abbey’s crusty butler Carson for so long – six TV series and two films, to be precise – it feels like we know him personally. But whereas Carson is a stick-in-the-mud, old-fashioned, pompous type, Jim is a different kind of chap altogether

With a full head of lustrous grey locks, a mischievous twinkle in his eye and a ripe sense of humour, he’s just one helluva nice bloke who looks at least a decade younger than his 73 years. He is, dare we say it, a national treasure.

“Oooh nay, now shush,” he says bashfully, revealing his Yorkshire roots. “I don’t think so. A treasure? No, no, no. If anything, I’m really more of a trinket!”

Trinket or treasure, Jim’s a gem whose performance as the man who keeps up appearances for the aristocratic Crawley family has won him four Emmy nominations. And a very recognisable gem at that.

“It is true to say that I do get recognised everywhere as Mr Carson,” he concedes. “It’s funny, with the exception of maybe Lesley Nicol who plays cook Mrs Patmore, if I were to go out with any other ‘below stairs’ female Downton characters dressed in our ‘civvies’, odds are that I would get recognised but they wouldn’t. It must be the double whammy of the eyebrows and the voice.”

The “voice” – deep and lusciously lugubrious – is instantly recognisable and, it has to be said, very easy on the ear. I’m talking to Jim at the digital launch of Downton Abbey: A New Era, the second feature-length film in the series which is released on platforms early this month.

It sees Carson – along with other characters – travelling to the south of France because Lady Violet, the Dowager Countess of Grantham (Dame Maggie Smith), has inherited a Mediterranean villa. Meanwhile, Downton Abbey itself has been invaded by a film crew who are paying top dollar to shoot a movie there.

“Carson is so grumpy about the crew it’s thought the best thing to do is whisk him out of the way,” explains Jim. “But once there, he shows fairly typical xenophobia. He’s very suspicious of the French and their ability to do anything properly.”

While Carson clearly wasn’t partial to the Cote d’Azur, the same couldn’t be said for Jim. “I mean, shoot me if I could say I was miserable filming in the south of France overlooking the Mediterranean,” he smiles. “Sure, it was a little bit warm but so what? I didn’t mind that at all. It was bliss after all those months of lockdown.

“The south of France was a complete treat for us. It was touch and go till the last minute as to whether we’d be able to go due to the pandemic. Plan B was substituting the Riviera with Scotland. Now Scotland’s stunning but it’s not the south of France.

“We were quite giddy when we finally arrived. We had to quarantine for a week but we were staying at a hotel with a swimming pool. I had to make sure I didn’t get a suntan as obviously Carson wouldn’t have had one.

“For those people who stayed behind filming in the UK, it was pouring rain in England. But for us it was a joy.”

Doubly so for Jim as his real-life wife, Imelda Staunton, was there, too. She reappeared as Lady Maud Bagshaw, a relation of Lord Grantham who popped up in the first Downton film.

Jim and Imelda didn’t appear in the same scene in Downton Mark 1 but they have a cheeky little scene together – just the two of them – in the latest. Sweating buckets in his customary bowler, Carson reluctantly enters a hat shop to purchase a straw boater.

Who should also be there but Lady Maud, who advises him against buying a helmet-like number which makes him look like “King Zog of Albania” and suggests a nifty Panama-type titfer instead. She also insists on paying for it. 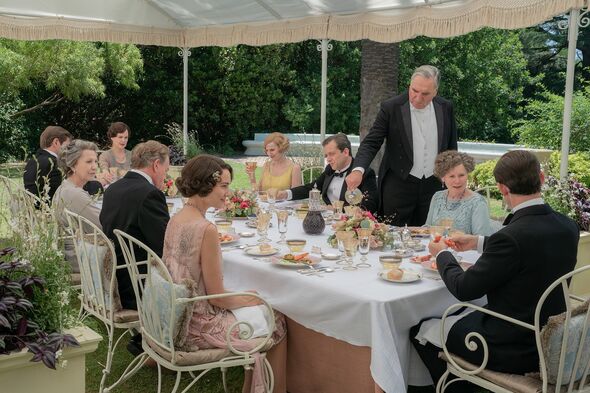 “That was great fun for us to do,” Jim reveals. “Especially as the shopkeeper thinks we’re man and wife! We’ve acted together a few times over the years. In fact, it was through work that we met – in a production of Guys And Dolls at the national Theatre in 1982. They also appeared together in the Royal Shakespeare Company’s production of The Wizard of Oz?. Imelda was Dorothy and he was the Cowardly Lion.

“We haven’t worked together hugely, though. It’s nice to bring different projects home plus we had our daughter, Bessie, to raise. I have to say, though, that it came as a when bit of a shock when, three years ago, Imelda revealed she was going to be involved in the first Downton film.

“I remember her telling me that she’d just been sent a very interesting film script. ‘Ooh anything nice?’ I enquired. ‘Yes,’ she replied. ‘Downton Abbey’. I said, ‘What! You’re playing a servant, surely.’ When she told me she was playing an aristocrat, well, I was furious!”

The eyes are twinkling and he’s joshing, of course. He clearly adores Imelda.

I can’t help wondering if, as Lady Maud did for Carson, she has a say in what Jim wears in real life. In a dark linen shirt, matching trousers and cream jacket, he’s certainly looking very dashing today.

“Let’s just say I’m not a shopper,” he grimaces. “Imelda gives me hints, nudges me and says things like, ‘Jim, it’s time to upgrade.’ She has never likened me to King Zog of Albania, however. One of the few benefits of lockdown for me was not having to go clothes shopping. I didn’t have to buy an item of clothing for two years and it was heaven.”

Downton Abbey: A New Era was a smash hit at the cinema and looks to be just as successful on streaming platforms and DVD. The obvious question is… Will there be a third film? And would Jim be up for it?

“We would all be, I think,” he replies. “People seem to like the films so there would probably be a demand for it. It’s not up to me, though.”

But what about – spoiler alert – the death of the Dowager Duchess, LadyViolet, played by Maggie Smith? How would that play out? “What about it?” Jim teases. “Nobody sees her in a coffin, do they? Who knows what may happen.”

Jim recently finished filming Wonka, the prequel to Charlie And The Chocolate Factory starring Timothée Chalamet, earlier this year.What’s next for him?

“We’re having a summer of fun,” he declares. “Imelda recently finished filming her first season of The Crown [she has taken over from Olivia Colman as the Queen], and doesn’t start the second until September, so we’re enjoying our garden.

“It was an overgrown mess when we bought our house in the 1990s. We learnt on the job – from friends, books, visiting gardens, stealing ideas, trial and error. It’s evolved as our lives have changed. We’ll often sit and have a cup of tea in quiet contemplation. We’ve experienced the benefits of slowing down, listening to the plants grow and absorbing the goodness of the garden.”

Downton Abbey: A New Era was released on digital platforms this week. It is out on DVD/Blu-ray on August 15.