Home » Celebrities » It Starts On The Page: Read The Pilot Script For Amazon & Legendarys Night Sky

It Starts On The Page: Read The Pilot Script For Amazon & Legendarys Night Sky

Co-produced by Amazon Studios and Legendary Television, the eight-episode first season of Night Sky debuted May 20. Led by Oscar winners Sissy Spacek and J.K. Simmons, the sci-fi adventure ended with a shocking finale, leaving room for the possibility of another season.

The Night Sky pilot, “To the Stars,” is the latest installment of It Starts on the Page, Deadline’s annual series that highlights the scripts that serve as the creative backbones of the buzzy shows that will define the TV awards season. The scripts in our series are all being submitted for Emmy Awards consideration this year and have been selected by Deadline using criteria that includes critical acclaim, selecting from a wide range of networks and platforms and a mix of established and lesser-known shows.

Night Sky is created by Holden Miller and Daniel C. Connolly. Spacek and Simmons star as Irene and Franklin York, a married couple that discover a portal in their backyard that leads to a deserted planet. Their peaceful life is upended when a mysterious young man named Jude (Chai Hansen) suddenly appears by the portal.

Written by Miller and directed by Juan José Campanella, the series begins with a young Irene (Lily Cardone) and Franklin (Lowrey Brown) meeting for the first time in a bar. Fifty years later, in the present day, Franklin (Simmons) is preparing dinner for Irene (Spacek) and making idle conversation before Irene suggests they go to see the stars and the two head out to the shed in their backyard. 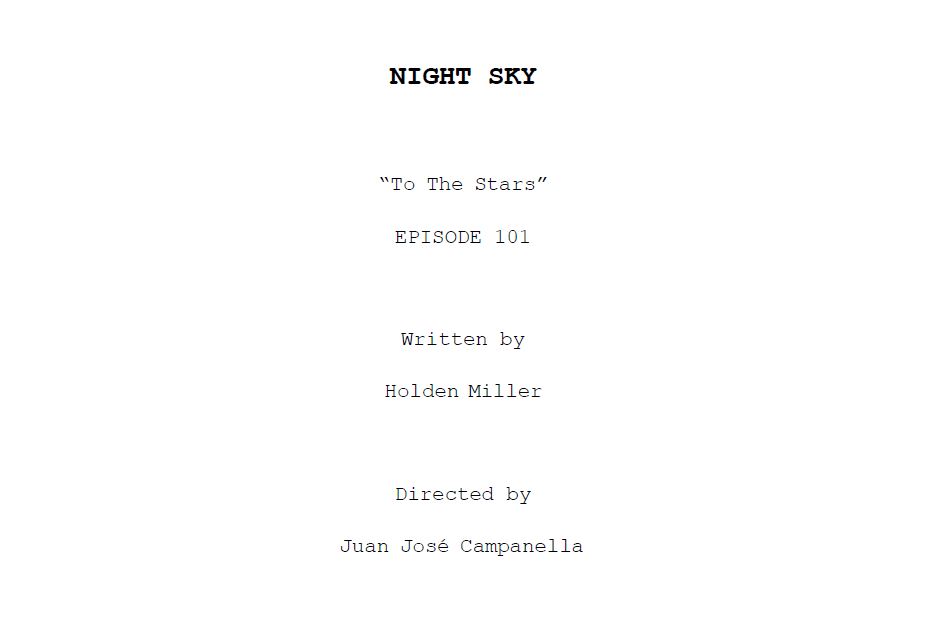 It Starts On The Page

It Starts On The Page: Read Dan Fogelman’s Series Finale Script For ‘This Is Us’

It Starts On The Page: Read Steve Martin & John Hoffman’s Pilot Script For ‘Only Murders In The Building’

It Starts On The Page: Read The Season 2 Premiere Of ‘Bridgerton’ Written By Chris Van Dusen