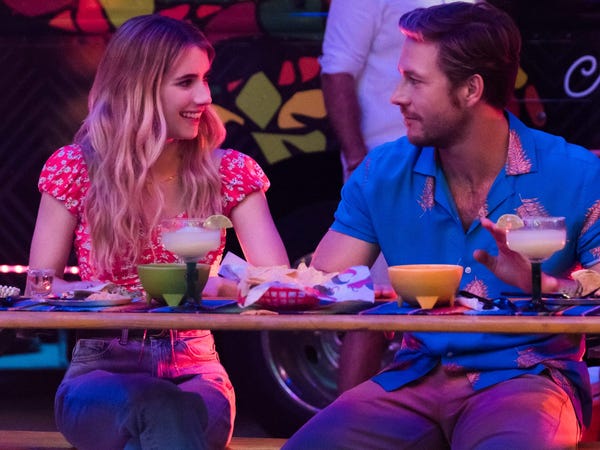 Luke Bracey said Emma Roberts felt like an "old friend" when they first met to read lines for Netflix's "Holidate."

In the 2020 movie, two single strangers named Jackson (Bracey) and Sloane (Roberts) agree to accompany each other as plus-ones to holiday celebrations without any emotions involved.

And just like their on-screen characters, Bracey and Roberts formed an immediate friendship.

"My experience with Emma was amazing," Bracey told Insider during a recent phone interview. "As soon as I walked in the room, I don't remember exactly what happened, but something funny happened and we all just started cracking up laughing."

The Australian actor continued: "It was like meeting an old friend. It was like Emma and I had been old friends for a long time."

Their natural connection helped them with their performances in the film, Bracey explained.

"There was such an ease to it," he said. "We really didn't have to work on getting to know each other or chemistry because it honestly felt like we'd been friends for a very long time."

Roberts and Bracey star in almost every single scene of the Netflix romantic comedy, and the "G.I. Joe: Retaliation" actor said they'd end up spending 12 to 14 hours together per day while filming the movie in Atlanta.

"For those days at work to be just us laughing on-camera and off-camera, it was a blessing," he told Insider.

Bracey continued, "There are so many times where we're just cracking up before the cameras are rolling. I'm sure there are plenty of outtakes of us just being absolute fools and laughing our heads off."

The cast also includes stars like Kristin Chenoweth, Jessica Capshaw, Jake Manley, Frances Fisher, and Alex Moffat. According to Bracey, the group had a "lovely dynamic."

"We were all having so much fun. And I think that shows in the film," he said. "If there's life when the cameras are off, that pulse comes through."

"Holidate" is Bracey's first time appearing in a romantic comedy, which he told Insider was a brand new "challenge" for him.

"I never really tried a rom-com, and everyone loves a rom-com," he said. "It'll be exciting to be part of one and to challenge myself that way."

The actor said that he hopes viewers can have as much fun watching the movie as the cast had making it.

"I hope they have a lovely couple of hours off from whatever they're doing at the moment," he said, adding that it's particularly important for people to take time to relax during the pandemic.

"When you can't go on holiday and moments like this with the pandemic, I think it's really, really lovely that we can sit and laugh and think of our loved ones and think of the close relationships we have," Bracey said.

"Holidate" is now available to stream on Netflix.

Every Trailer We Have So Far For Netflix's November Originals

The truth about Teyana Taylor and Kanye West
Recent Posts