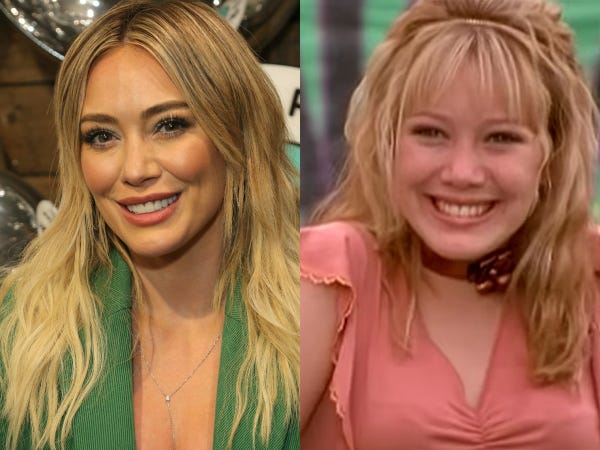 Hilary Duff opened up about being typecast in her early 20s following the success of "Lizzie McGuire" and her titular role on the hit Disney Channel show.

"I definitely went through big frustrations of being like, 'Why can I not get a shot at being someone else?'" the 33-year-old actress said in a new cover story for Cosmopolitan UK.

Duff continued: "From age 21 to 25, before I became a mom, there was a lot of frustration. I would get to producer callback and they'd be like, 'She's so great and she gave us the best reading and blah blah blah, but she's Hilary Duff…'"

Duff rose to fame as a teenager with her role on "Lizzie McGuire," a hit early 2000s sitcom that spawned a theatrical film titled "The Lizzie McGuire Movie."

The actress went on to become a staple on Disney Channel, long before younger stars like Miley Cyrus and Selena Gomez became household names on the network.

During and after her time on "Lizzie McGuire," Duff pursued a singing career. She released a Christmas album and four more studio albums.

In her post-Lizzie roles, the actress starred in rom-coms and teen-friendly movies like "A Cinderella Story," "Raise Your Voice," and "Material Girls" (one of many collaborations with sibling Haylie Duff).

She later booked a recurring role on season three of the hit CW drama "Gossip Girl," in addition to guest-starring roles on shows like "Community" and "Two and a Half Men."

Duff also took on a darker film with 2019's thriller "The Haunting of Sharon Tate," in which she played the titular character.

Since 2015, Duff has portrayed Kelsey Peters, a book publisher, on the show "Younger," which was developed by "Sex and the City" creator Darren Star. A spin-off centered on her character is in the works.

The actress is also going to reprise her role as Lizzie McGuire for a revival, which was announced in summer 2019.

The show, centered on 30-year-old Lizzie living in NYC, was supposed to debut on Disney Plus in 2020, but hit a snag due to creative disagreements after the first two episodes were filmed. Duff told Cosmopolitan UK and Insider that she's still optimistic about the show moving forward at Disney Plus.

The actress also told Cosmopolitan UK that she was repeatedly asked in the past to star on a "Lizzie McGuire" revival, but she declined until last year, when she finally came to terms with the role.

"It just doesn't annoy me anymore when people refer to me as Lizzie McGuire or say that was my biggest role, because it paved the way for all the other roads I've been able to take," she said.

Kelly Clarkson gets emotional as she covers Aerosmith's song Cryin' after filing for divorce with Brandon Blackstock
10/27/2020
Categories
We and our partners use cookies on this site to improve our service, perform analytics, personalize advertising, measure advertising performance, and remember website preferences.Ok