If you’ve ever wondered what happens to an old iPhone, look no further than Apple’s phone recycling program. Of course, recycling on its own is cool enough, but this high-tech process utilizes two different types of robots to get it all done. If you’re curious about this futuristic process, here’s exactly how Apple recycles old iPhones with the help of robots Daisy and Dave.

Apple will hold its second fall event on Tuesday, Oct. 13, and all signs point to an announcement of new iPhones. And as people prepare to ditch their old devices, it’s worth a closer look at the phone recycling program Apple’s had in place since 2013. In July 2020, Apple announced a plan to become completely carbon neutral by 2030, and with that came the introduction of a new robot recycler, Dave. Dave joins Daisy, a disassembly robot which launched in April 2018. The Daisy robots marked the company’s first efforts to more efficiently disassemble iPhones and help save resources from the devices.

Apple’s Daisy robot works to break apart iPhones, extracting minerals for recycling by using a four-step process to extract an iPhone battery with air. The phones begin their journey on a conveyor belt. Then, Daisy places prongs between the phone’s screen and body to separate them. The battery is removed with a blast of freezing air and the screws are removed with a punch. The robot then removes the cameras, haptics, speakers, and more. After that, all that’s left is the phone’s aluminum shell, which is recycled along with other components of the phone, such as tin and cobalt, the latter which is used to make new iPhone batteries.

In 2018, Daisy replaced the Liam robot, which launched in 2016 and disassembled the iPhone 6. Apple said Daisy improved on "existing techniques, such as shredding, [which] recover only a few kinds of materials and often diminish their quality." The valuable materials Daisy recovers during the disassembly process include aluminum, gold, silver, copper, tin, cobalt, and other rare earth elements. As of 2019, Daisy robots are able to deconstruct 15 total iPhone models, and can take apart up to 200 iPhones per hour, before they’re passed along to Dave. 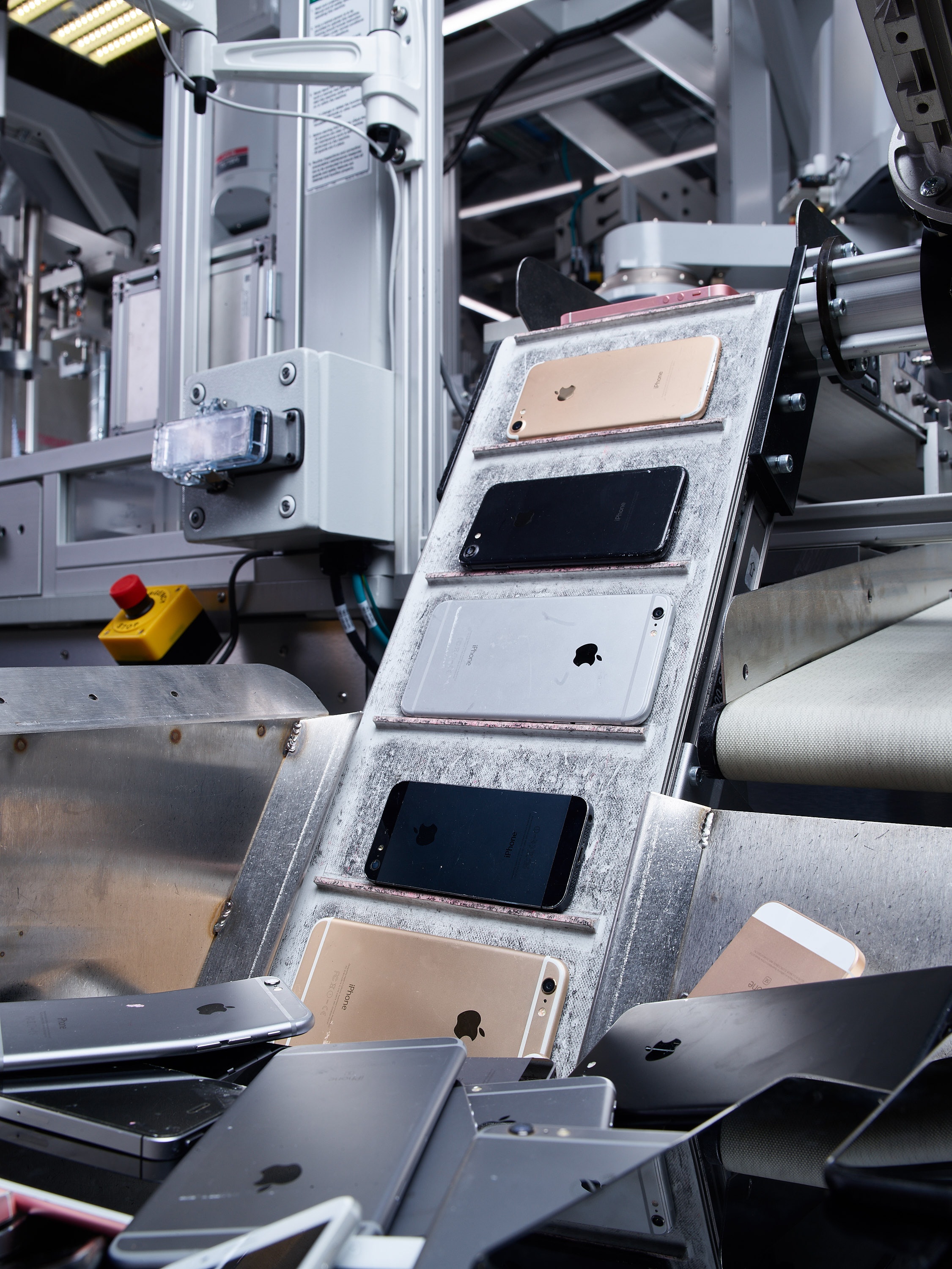 Dave robots disassemble an iPhone’s Taptic Engine, which is the part of the device responsible for the touch screen sensations and vibrations you feel when using your phone. By disassembling the Taptic Engine, materials such as rare earth magnets (made from the alloys of rare elements on Earth) and Tungsten (one of Earth’s rare metallic elements), as well as steel, can be more easily retrieved during recycling.

Daisy robots can recover over 2 pounds of gold, about 16-and-a-half pounds of silver, and nearly 2 tons of aluminum for every 100,000 iPhones it deconstructs. A single Dave robot can process up to 800 modules per hour. The recycled parts from old iPhones and other devices are then reused in new phones. For example, an iPhone 11 contains 100% recycled materials for its Taptic Engine, as well as 100% recycled tin in its main logic board. iPhone 11 models also use 30% recycled plastic from old phones.

Apple’s robot recycling supports the company’s goal to significantly reduce its carbon emissions through better recycling. Apple’s desire to be certified carbon neutral means that its business has to have virtually no carbon footprint on the environment and no harmful greenhouse gas emissions. Greenhouse gases are released into the atmosphere in a few ways, such as factory farming emissions from methane gas, or the burning of fossil fuels such as coal, oil, and gas, which creates carbon dioxide (CO2). Since many factories operate with fossil fuels, global warming has been immensely attributed to the industrialization of the world.

As of 2020, iPhones, iPads, Macs, and Apple Watches devices sold in the past year are made with recycled content, which includes 100% recycled rare earth elements — like Tungsten and earth magnets — in the iPhone Taptic Engine, which is the first-ever for a smartphone.

If you’re ready to trade in your iPhone for a credit toward a new phone, Apple will determine if it’s eligible for refurbishment and give you an offer. If the phone isn’t eligible, Apple will put the phone its recycling program.