Halsey gave birth to her first child on July 14 and took to Instagram to announce the exciting news!

Halsey is a mom! The 26-year-old welcomed her first child with boyfriend Alev Aydin on July 14, 2021. After waiting a few days to experience the bliss of motherhood, the “Graveyard” singer shared the good news with the world. “Gratitude. For the most “rare” and euphoric birth. Powered by love,” she captioned a July 19 Instagram post while also revealing her child’s name: Ender Ridley Aydin. In the first IG pic, Halsey cradled her bundle of joy while lying in a hospital bed. In the second pic, Halsey breastfed her hungry baby.

Halsey’s happy news comes after she first announced she was expecting back in Jan. She showed off her growing baby bump in three gorgeous photos from a professional maternity photoshoot and captioned the post with, “Surprise” while also tagging Alev. The shocking but awesome news brought many congratulatory messages from fans in the comments section and continued on various posts throughout her pregnancy.

Since announcing the news, Halsey has been very open about her pregnancy journey and continued to post snapshots of her baby bump and even an ultrasound photo that showed off the tot’s little feet. She also revealed her endometriosis scars that were located at the bottom of her stomach in a pic that included a sweet message. “the scars that got me this angel,” the caption for the pic read. 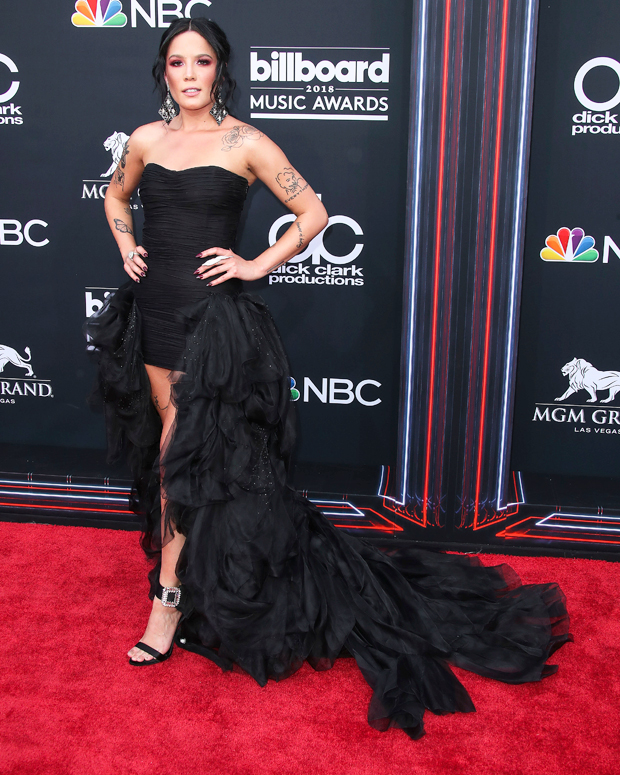 It was years before her pregnancy that Halsey first revealed she had endometriosis, a painful disease that causes the tissues that normally line the uterus to grow outside the uterus. In a now-deleted Instagram post on Jan. 6, 2017, the talented artist told her fans that she “braved multiple terrifying surgeries” that day.

“The most important of which being the surgery that would hopefully treat my endometriosis. For those of you who have followed this battle of mine or who may suffer with it yourself, you know the extremes to which it can be mentally exhausting and physically painful,” she wrote in the post while also admitting she was in “total agony“ before concluding with a positive message. “If you suffer from chronic pain or a debilitating disease, please know that I have found time to live a crazy, wild, rewarding life AND balance my treatment, and I hope so much in my heart that you can too.”

We’re so glad Halsey was able to have a happy ending. Congratulations to her and Alev on their new bundle of joy!