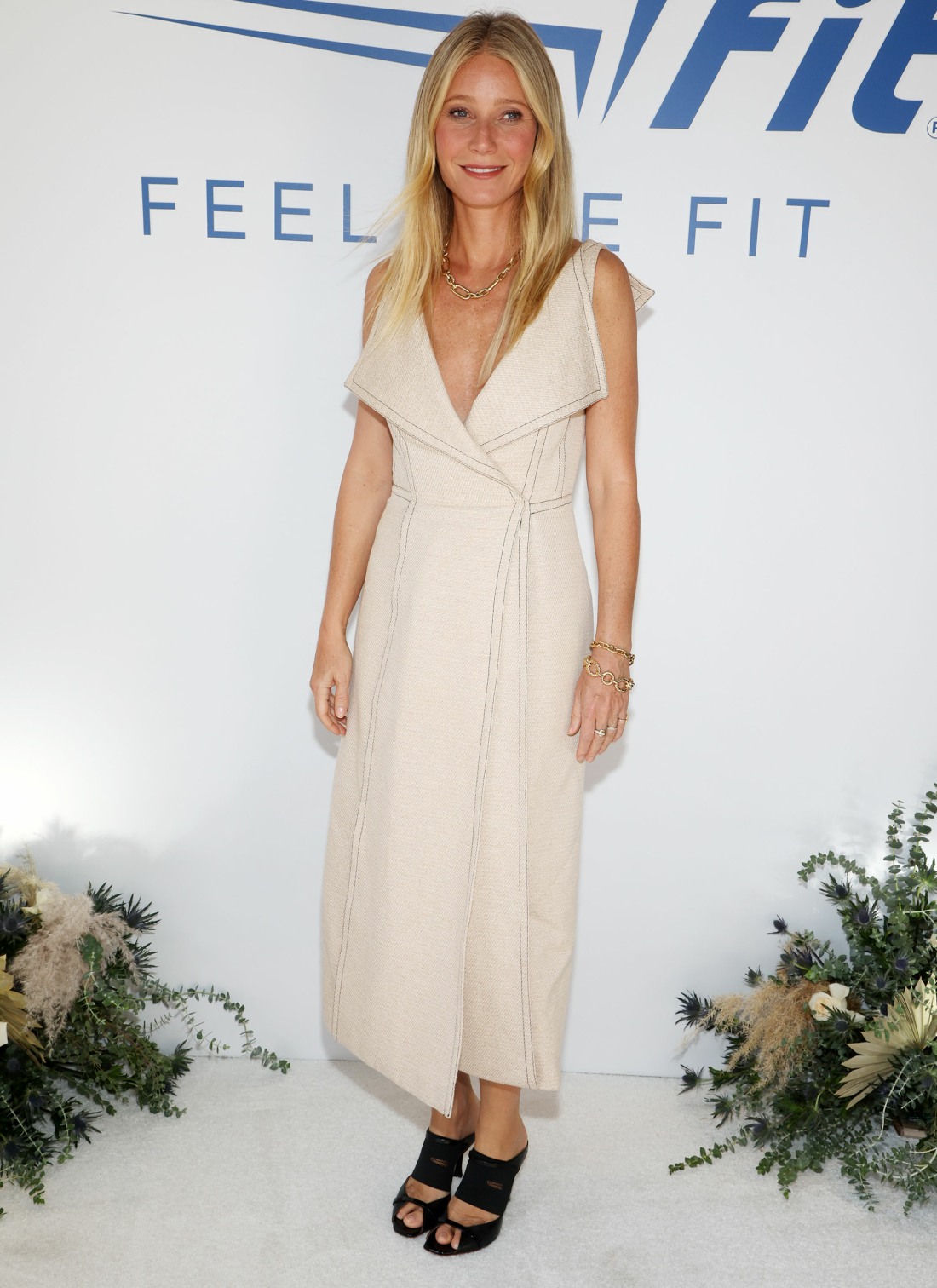 Gwyneth Paltrow got her “happily ever after.” She’s married to Brad Falchuk, one of Ryan Murphy’s producing partners. I think Gwyneth enjoys the fact that she’s not with a celebrity, but Falchuk still has a lot of power behind-the-scenes in the industry. Falchuk also doesn’t seem embarrassed to be with her, which was the problem in her first marriage. The way Falchuk and Paltrow talk about each other and talk about their marriage is really something too – she truly found her soulmate in Falchuk, he’s very sycophantic and publicly demonstrative towards her and she loves that. Anyway, Gwyneth gave an exclusive interview to Us Weekly to promote her “Gwyneth Paltrow x Copper Fit collection.” (The photos in this post are from the launch event this week.) Some highlights:

Soulmates: “I do believe in [soulmates]. I mean, I think that there can be more than one. But I do believe that there’s that person that can feel so right. And I think you do know. You know pretty early when it’s the right person.”

No withholding: As far as her marriage to Falchuck, 51, Paltrow told Us on Wednesday that the twosome work hard at keeping their relationship healthy by “not withholding” how they feel. “As women, I think sometimes we tend to swallow things, and I don’t think that’s healthy at all, and it leads to resentment,” she explained, noting that the lovebirds “really try to really articulate our feelings” when “something difficult” comes up.

She doesn’t always handle open communication well: “I sometimes handle it less perfectly than he does. But I think having that communication and also really wanting the same things and being aligned and wanting our marriage to deepen and grow is very helpful.”

Allocate space: Paltrow also shared that she and the Scream Queens director “put time” into their romance even — when it’s hard — because they recognize that “a lot of marriages struggle” when two people don’t allocate space for each other.

Why she’s collaborating with Copper Fit: “I like the idea of women seeking support when they exercise and are getting older and need support for joints,” she told Us. “I broke my knee, [and now] I use the Copper Fit sleeve all the time. Understanding that our bodies need support — that’s okay. That’s nothing to be ashamed of.”

A word about needing support during exercise… it’s true, and I’m at the age where I watch all of those Copper Fit commercials and think about whether I should get a “sleeve” for my bad knee. I actually bought some copper-lined compression socks for my walks and while the difference wasn’t crazy-significant, they did make my feet feel slightly better. I kind of don’t hate the fact that Gwyneth Paltrow is normalizing this kind of stuff? I’m sure she’s trying to “upmarket” it, which is a pain in the ass, but honestly… people swear by those copper-lined sleeves.

As for her talk about soulmates and what have you… I don’t believe in soulmates for ME, but I acknowledge that other people probably have soulmates, and I think Goop probably found hers in Brad Falchuk. 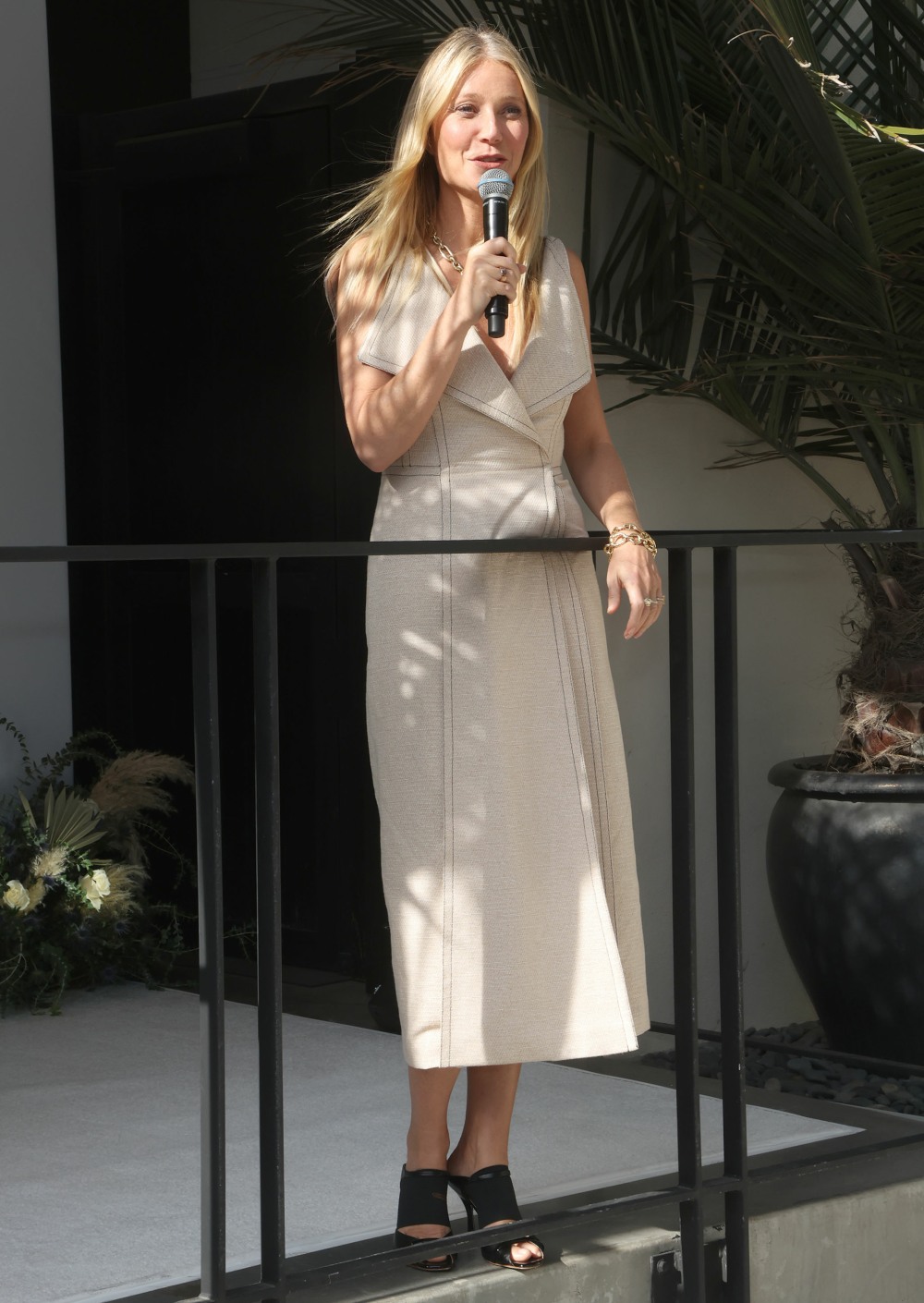