Home » Celebrities » For U.S. Goalkeeper, a Moment to Forget and a Lesson She’ll Remember For U.S. Goalkeeper, a Moment to Forget and a Lesson She’ll Remember

REIMS, France — Until mid-June, goalkeeper Alyssa Naeher had never played in a World Cup match. She had never appeared in the Olympics, either. So the United States faced a flurry of urgent questions when it arrived in France:

How would Naeher handle the pressure when she was inevitably tested? Would she be as consistent and dependable as former champions like Hope Solo and Briana Scurry? Or would Naeher leave the Americans with rare vulnerability in a position that was long one of its greatest strengths?

During group play, the questions remained largely unresolved. The United States won its three matches by a combined 18 goals to none, and Naeher was rarely called upon. But a troubling answer came nine minutes into Monday’s tense 2-1 victory over Spain in the second round.

Naeher played a casual, ill-advised pass to central defender Becky Sauerbrunn that was nicked away by Lucía García of Spain. The resulting chaos led to a goal for Spain that tied the match at 1-1. It was the kind of blunder, United States Coach Jill Ellis later acknowledged, that “can absolutely destroy a team or unravel a team.”

In the 27th minute, Naeher slammed an awkward clearance into an onrushing García and had to scramble to prevent further damage. But she then settled into the match and assuredly handled free kicks and crosses lobbed into the box for the final hour, while absorbing repeated physical contact. In the 80th minute, Naeher was left kneeling on all fours, trying to catch her breath, after bravely punching away a free kick and colliding with the Spanish defender Virginia Torrecilla.

“That was just one big mistake, and I think she actually responded super well to it and kind of saved us today,” Sauerbrunn said.

With the tournament’s most anticipated match approaching — the quarterfinal on Friday between the United States and France in Paris — Naeher learned something valuable in her first World Cup knockout match. An early mistake does not have to be game-changing. Her teammates will have her back. And grit and resolve can persevere through stretches of entropy.

“I don’t know if it’s unfair,” Sauerbrunn said. “I think it’s just how soccer is. Alyssa has come into this tournament without any World Cup or Olympic experience. But I think she’s shown time and time again that she’s an excellent goalkeeper.”

Naeher shrugged off questions about her reliability as “part of the territory.” She is quiet and undemonstrative in contrast to Scurry and Solo, who were expressive and forceful. Solo’s presence still looms over this United States team: She is working for the BBC during the World Cup. But if Naeher is bothered by the scrutiny, she has not let it show publicly. 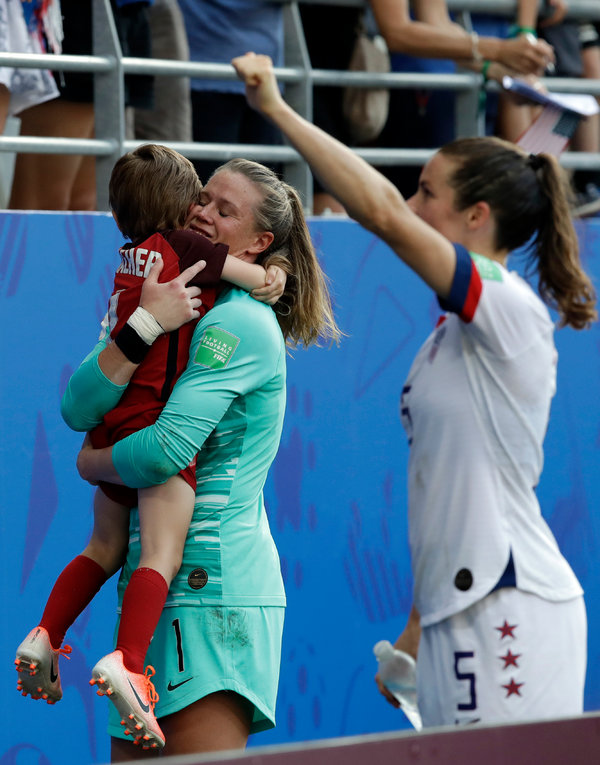 In retrospect, Naeher said of her error in the ninth minute, she should not have played the ball to Sauerbrunn “in a pressure pocket,” but instead should have launched her kick upfield and kept the ball out of immediate danger.

“I just think I need to make a smarter decision,” Naeher said.

Sauerbrunn was pressed on her blindside by a charging García. Sauerbrunn tried to play the ball to Julie Ertz, the defensive midfielder dropping back in the center of the field, but García’s rush instead sent the ball to the feet of Spain’s star striker, Jennifer Hermoso. Her shot from the top of the penalty area curled into the upper right corner as Naeher, stranded off her line, could only reach in vain with her left hand.

Sauerbrunn called the gaffe a “debacle” and accepted responsibility for not trying to clear the ball more urgently out of traffic. In her mind, she thought, “that was probably one of the worst things that could ever happen.”

Quickly, Sauerbrunn tried to forget about the mistake. Naeher did the same thing, telling herself: “There’s still 80 minutes to play. You can’t dwell on something that happened. You can’t change it. I have full confidence in the team. We’re going to get one back.”

Fortunately for the Americans, Megan Rapinoe had scored on a penalty kick in the seventh minute. So Hermoso’s goal tied the score, instead of giving Spain the lead. At halftime, Ellis said, the Americans remained confident that they could win with possession and ball movement.

Finally, in the 71st minute, the United States got its chance. Rose Lavelle was fouled in the penalty area and, after a video review confirmed the decision, Rapinoe converted her second penalty kick for a 2-1 lead. The stolid Naeher allowed herself only a brief clap. At the final whistle, she pumped her fist with restraint.

If the United States is to prevail over France, Naeher must “dominate the box,” forward Alex Morgan said, particularly on free kicks intended for the 6-foot-2 defender Wendie Renard. Five of France’s nine goals have come on set pieces.

“I think Alyssa today was solid,” Ellis said of Monday’s match, referring to Naeher’s early lapse as “one mental thing.” “She’s lived through it and she’s moving on.”