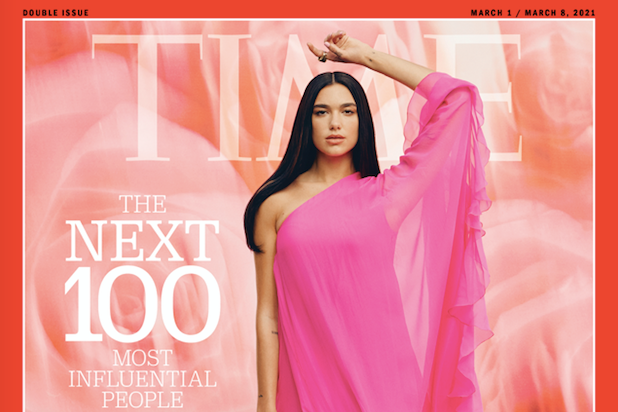 On Wednesday, Time released its 2021 Time100 Next, a list of movers and shakers in various industries. TheWrap has exclusively learned that on Friday, a stream dedicated to the list will feature performances and appearances from entertainers like Dua Lipa, Phoebe Bridgers, Luke Combs, Anitta, Doja Cat and Charli D’Amelio. (Register here.)

Beyond the performances from Lipa, Bridgers, Combs and Anitta, there will be appearances by Regé-Jean Page, Hunter Schafer, Chloe X Halle, Amber Ruffin, Ayana Elizabeth Johnson, Rohan Pavaluri, Maria Raga and Dr. Dairon Elisondo Rojas. All of them are on the Time100 Next list.

“TIME100 Talks Presents the 2021 TIME100 Next” will be, according to the organization, “a special episode of the virtual series that convenes leaders from every field to spotlight solutions to urgent global problems and encourage cross-disciplinary action.” It streams at 1 p.m. ET and will be hosted by actor Maitreyi Ramakrishnan.

The Time100 Next list is released as an extension of the Time100 list of most influential people each year. Introduced in 2019, the Next list highlights 100 people who are shaping their respective fields, including those of business, entertainment, health and science, sports, activism and more.

Like the members of the Time100 list, the Time100 Next honorees each have a tribute written by someone in their field. Singer Olivia Rodrigo’s tribute is written by Gwen Stefani, while Lipa’s is from Kylie Minogue and TikTok star D’Amelio’s comes from Jennifer Lopez. Doja Cat’s tribute is written by Lil Nas X, and poet Amanda Gorman, who shot to fame during President Joe Biden’s inauguration, will be heralded by Lin Manuel Miranda. Sen. Mitt Romney provided the tribute for Sen. Ben Sasse.

90 of 95 COVID tests in a Michigan prison came back positive for the highly contagious U.K. variant