Brazil need the title to calm waters for Tite until 2022 World Cup, while Messi’s team seeks first trophy in 26 years. 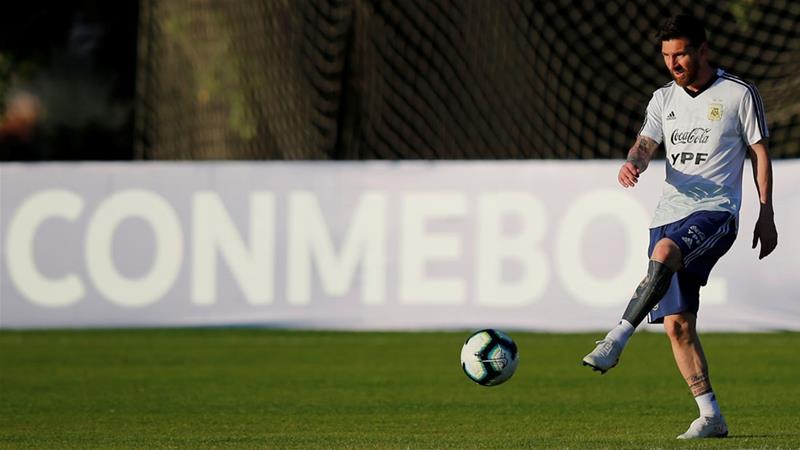 Brazil will be under pressure for its future and Argentina for its past when they meet in the Copa America football semifinals on Tuesday.

While host Brazil needs the title to try to calm the waters for coach Tite until the 2022 World Cup in Qatar, Lionel Messi’s team seeks its first trophy in 26 years, which would be the first major one for the superstar in the white and blue shirt.

In the other semifinal, defending champion Chile and underdog Peru play in Porto Alegre on Wednesday.

In a change from the quarterfinals, teams will play extra time if the first 90 minutes are drawn.

Neither Tite nor Argentina coach Lionel Scaloni has given much insight into how their teams will play their superclasico in Belo Horizonte. Sunday’s training sessions were closed to the media. Not much was seen in the 15 minutes press were allowed to watch training on Monday.

The Brazilian coach doesn’t like to make changes, meaning his team could stick to the 4-1-3-1 formation it has used for most of the tournament, with sensation Everton, Philippe Coutinho and Roberto Firmino closing midfield gaps and helping Gabriel Jesus up front.

Tite could be forced to change left-back Filipe Luis, who is recovering from right thigh pains, for Alex Sandro.

Brazil’s coach has been under pressure for his conservative approach since he picked a squad filled with veterans, which signalled his desperation to win.

Asked if his three years in charge of Brazil make it mandatory that his team shows better team organization than Argentina, Tite agreed.

“But Argentina’s teamwork has grown, and that feeds individualities,” the Brazilian coach told journalists.

Scaloni has made changes to his inexperienced team for every Copa America match, and is under pressure to be more conservative against Brazil by ending its effective offensive trio of Messi, Lautaro Martínez and Sergio Aguero.

In his media conference on Monday, Scaloni confirmed Aguero will be a starter after a series of reports in Argentinian media suggested the striker could be left out.

“The rest I will not confirm today. Not even Messi,” the coach jokingly said.

Lautaro could be replaced by winger Angel di Maria, as in the second half of the victory against Venezuela.

Di Maria has performed well in roles that include defending. Midfielder Giovani Lo Celso is also among the candidates for a place in the starting lineup.

Both teams far from impressive

Brazil’s and Argentina’s Copa America campaigns have been far from impressive.

The hosts have two victories and two draws, Brazil advancing to the semifinals only after a penalty shootout win against Paraguay following a goal-less first 90. The team was booed by fans in three of the four matches, and misses the injured Neymar to break stronger defensive lines.

Argentina comfortably beat Venezuela 2-0 in the quarterfinals in its best performance so far, but it started with a defeat by the same score against Colombia, drew Paraguay in a match which almost sent it crashing out of the tournament, and won against Qatar 2-0 to advance to the knockout stage.

In none of those matches did Messi deliver a Barcelona-like performance.

The last time they faced off at Mineirao Stadium in November 2016, Brazil won 3-0 in a 2018 World Cup qualifier. Since then, Tite has kept his job, and Argentina has had three coaches: Edgardo Bauza, Jorge Sampaoli, and Scaloni on an interim basis.

The last time Brazil lost to Argentina at home was in April 1998 – in a friendly before the World Cup in France – when striker Claudio Lopez scored at Maracana Stadium.

Messi, who admittedly is not playing well at Copa America, has also struggled in most of the superclasicos.

In nine matches between the two South American powers, the superstar has lost five and won three, all those in friendlies against below-strength Brazil lineups.

The last great performance by Messi against Brazil was in July 2012, when he scored a hat trick in a 4-3 win in the US.

Before the tournament, he said Argentina was “not a candidate” for the Copa title. In recent days, he’s changed his mind.

“What matters is that we are in the semifinals, and matches have been very tight at this Copa America,” Messi said after the win against Venezuela.

Margaret Qualley, Maya Hawke & Harley Quinn Smith Get Glam For ‘Once Upon a Time in Hollywood’ Premiere
Recent Posts